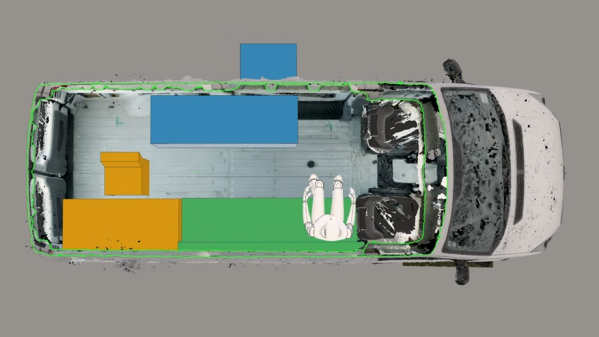 Folks who refurbish and rebuild vans into off-grid campers (especially with the ability to work in them remotely) put a fantastic amount of planning and work into their projects. [Rob] meticulously documented his finished van conversion and while he does a ton of clever work, we especially liked how he shows modern tools like photogrammetry can improve the process.

[Rob] used a camera and photogrammetry software to 3D scan the van inside and out. The resulting model means that CAD tools can better assist with the layout and design phase. This is an immense help, because as [Rob] points out, an empty van is anything but a hollow box on wheels. Every surface is curved, none of the sides are identical, and there frankly isn’t a right angle to be found anywhere. When every little scrap of space counts, it’s important to have an accurate reference.

Of course, mapping the work are was just the beginning. It took six months, but he turned a Volkswagen Crafter cargo van into a slick off-grid camper capable of remote work. The full series of videos is on his site, but you can also watch the video highlights, embedded below.

The photogrammetry was done with Meshroom, and if you’d like to know more, we’ve previously explained different 3D scanning methods and how they can help with design work like this.

END_OF_DOCUMENT_TOKEN_TO_BE_REPLACED 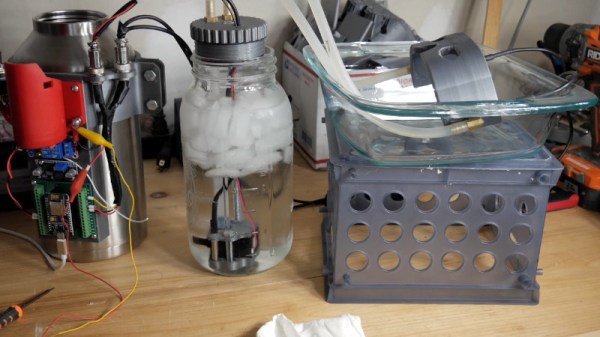 Seeing his wife try to use a cool face mask to get through the pain of a migraine headache, [Sparks and Code] started thinking of ways to improve the situation. The desire to save her from these debilitating bouts of pain drove him to make an actively cooled mask, all the while creating his own headache of an over-engineered mess.

Instead of having to put the face mask into the refrigerator to get it cold, [Sparks and Code] wanted to build a mask that he could circulate chilled water through. With a large enough ice-filled reservoir, he figured the mask should be able to stay at a soothing temperature for hours, reducing the need for trips to the fridge.

[Sparks and Code] started out by using photogrammetry to get a 3D model of his wife’s face. Lack of a compatible computer and CUDA-enabled GPU meant using Google Cloud to do the heavy lifting. When they started making the face mask, things got complicated. And then came the unnecessary electronics. Then the overly complicated  and completely unnecessary instrumentation. The… genetic algorithms? Yes. Those too.

We won’t spoil the ending — but suffice it to say, [Sparks and Code] learned a cold, hard lesson: simpler is better! Then again, sometimes being over-complicated is kind of the point such as in this way-too-complex gumball machine.

END_OF_DOCUMENT_TOKEN_TO_BE_REPLACED 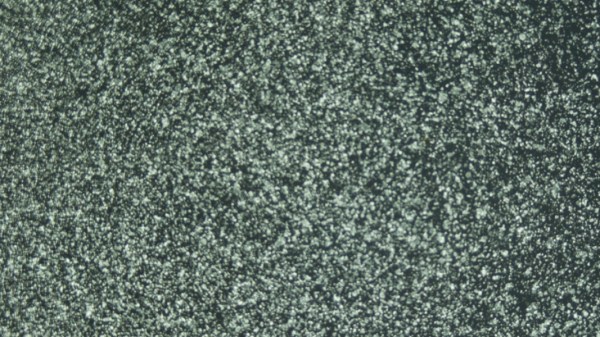 When it comes to 3D scanning, a perfect surface looks a lot like the image above: thousands of distinct and random features, high contrast, no blurry areas, and no shiny spots. While most objects don’t look quite that good, it’s possible to get usable results anyway, and that’s what [Thomas] aims to help people do with his tips on how to create a perfect, accurate 3D scan with photogrammetry.

3D scanning in general is pretty far from being as simple as “point box, press button”, but there are tools available to make things easier. Good lighting is critical, polarizers can help, and products like chalk spray can temporarily add matte features to otherwise troublesome, shiny, or featureless objects. [Thomas] provides visuals of each of these, so one can get an idea of exactly what each of those elements brings to the table. There’s even a handy flowchart table to help troubleshoot and improve tricky scan situations.

[Thomas] knows his stuff when it comes to 3D scanning, seeing as he’s behind the OpenScan project. The last time we featured OpenScan was back in 2020, and things have clearly moved forward since then with a new design, the OpenScan Mini. Interesting in an open-sourced scanning solution? Be sure to give it a look.

Readers are likely familiar with photogrammetry, a method of creating 3D geometry from a series of 2D photos taken of an object or scene. To pull it off you need a lot of pictures, hundreds or even thousands, all taken from slightly different perspectives. Unfortunately the technique suffers where there are significant occlusions caused by overlapping elements, and shiny or reflective surfaces that appear to be different colors in each photo can also cause problems.

But new research from NVIDIA marries photogrammetry with artificial intelligence to create what the developers are calling an Instant Neural Radiance Field (NeRF). Not only does their method require far fewer images, as little as a few dozen according to NVIDIA, but the AI is able to better cope with the pain points of traditional photogrammetry; filling in the gaps of the occluded areas and leveraging reflections to create more realistic 3D scenes that reconstruct how shiny materials looked in their original environment.

If you’ve got a CUDA-compatible NVIDIA graphics card in your machine, you can give the technique a shot right now. The tutorial video after the break will walk you through setup and some of the basics, showing how the 3D reconstruction is progressively refined over just a couple of minutes and then can be explored like a scene in a game engine. The Instant-NeRF tools include camera-path keyframing for exporting animations with higher quality results than the real-time previews. The technique seems better suited for outputting views and animations than models for 3D printing, though both are possible.

Don’t have the latest and greatest NVIDIA silicon? Don’t worry, you can still create some impressive 3D scans using “old school” photogrammetry — all you really need is a camera and a motorized turntable.

END_OF_DOCUMENT_TOKEN_TO_BE_REPLACED 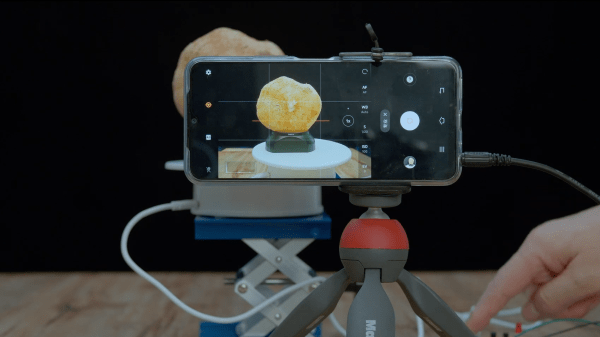 Photogrammetry is a great way to produce accurate 3D models of real objects. A turntable is often a common tool used in this work as it helps image an object from all angles. [Peter Lin] wanted a way to run the photogrammetry process with minimal human intervention, and set about building an automated turntable setup.

The build relies on a smartphone to take images of the physical object. The phone is triggered to take photos by an ESP8266, which fires the shutter via the phone’s audio socket. The microcontroller then turns the turntable on for a short period of time after each shot, rotating it by a set angle.

The build still requires objects to be repositioned in various orientations on the turntable now and then, in order to capture the top and bottom areas that would otherwise be obscured. However, the grunt work of taking the photos and rotating the objects is now entirely automated.

It’s a useful build for anyone that finds themselves regularly imaging objects to create 3D models. The results of [Peter]’s rig look great, and as a bonus come with life-like textures ready to go. We’ve seen some other great photogrammetry builds before, too. Video after the break.

END_OF_DOCUMENT_TOKEN_TO_BE_REPLACED 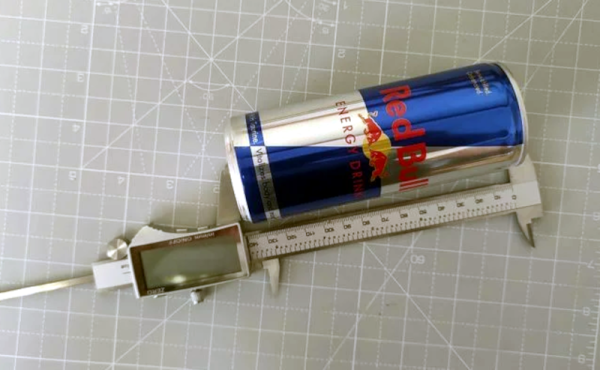 There are many scanners — both commercial and homemade — that can take a variety of scans or images of a 3D object and convert it into something like a 3D printable file. When the process works, it works well, but the results can be finicky at best and will require a lot of manual tuning. According to [Samuel Garbett], you might as well just draw your own model using Blender. He shows you how using a Red Bull can which, granted, isn’t exactly the most complicated thing ever, but it isn’t the simplest either.

He does take one photo of the can, so there is a camera involved at some point. He also takes measurements using calipers, something you probably already have laying around.

Since it is just a can, there aren’t many required pictures or measurements as, say, a starship model. Once you have the measurements, of course, you could use the tool of your choice and since we aren’t very adept with Blender, we might have used something we think is easier like FreeCAD or OpenSCAD. However, Blender has a lot of power, so we suspect making the jump from can to the USS Enterprise might be more realistic for a Blender user.

Besides, it is good to see how other tools work and we were surprised that Blender could be relatively simple to use. Every time we see [Jared’s] channel, we think we should learn more about Blender. But if you have your heart set on a real scanner, there are plenty of open source designs you can print. 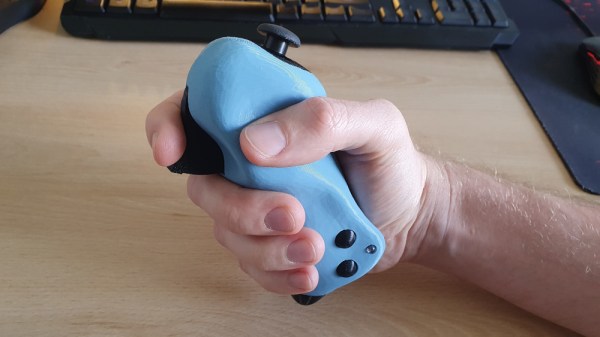 When it comes to designing enclosures which aren’t simple boxes or other basic shapes, the design process tends to get somewhat tedious and involved as the number of measurements to be transferred into the CAD program begins to skyrocket. One possible shortcut here is detailed by [Sebastian Sokolowski], who describes a process that combines modelling clay with photogrammetry.

[Sebastian] covers the design of a hand-held controller that should fit ergonomically when grasped. This starts off with the electronics and mechanical components that have to fit inside the controller: inside a CAD tool (demonstrated in Fusion 360), these components are arranged with a simple box enclosure around them. This box is then 3D printed and with modelling clay the desired shape of the controller is created around this box.

With a modelling clay version of the controller ready, it is photographed from as many angles as possible before these photos are processed by the open source Meshroom tool into a 3D model. After fixing up some issues in the mesh and knocking down the vertex count on this model so that the CAD tool doesn’t suffer a seizure importing it, it’s ready for final processing.

Within the CAD tool all that is left now is to refine the imported model to refine its outer shape and to create the inner details for mounting the electronics, switches and other components.