Even the most secular among us can understand why somebody would want to have a digital version of the Bible. If you’re the sort of person who takes solace in reading from the “Good Book”, you’d probably like the ability to do so wherever and whenever possible. But as it so happens, a large number of people who would be interested in a more conveniently transportable version of the Bible may not have the technological wherewithal to operate a Kindle and download a copy. 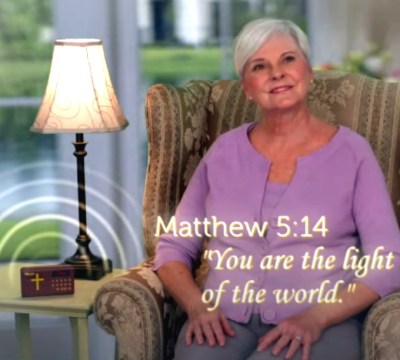 Which is precisely the idea behind the Wonder Bible, a pocket-sized electronic device that allows the user to listen to the Bible read aloud at the press of a button. Its conservative design, high-contrast LED display, and large buttons makes it easy to operate even by users with limited eyesight or dexterity.

The commercial for the Wonder Bible shows people all of all ages using the device, but it’s not very difficult to read between the lines and see who the gadget is really aimed for. We catch a glimpse of a young businessman tucking a Wonder Bible into the center console of his expensive sports car, but in reality, the scenes of a retiree sitting pensively in her living room are far closer to the mark.

In truth, the functionality of the Wonder Bible could easily be replicated with a smartphone application. It would arguably even be an improvement by most standards. But not everyone is willing or able to go that route, which creates a market for an affordable stand-alone device. Is that market large enough to put a lot of expense and engineering time into the product? Let’s crack open one of these holy rolling personal companions and find out.

Let’s be very clear from the start: the Wonder Bible is just an MP3 player. Literally. There’s a micro SD card stuck right in the side with roughly 4 GB of MP3s in a hierarchical directory structure that separates the different books of the Old and New Testaments. The tracks even have proper ID3 tags, so you could easily import the lot into your media player of choice instead of using the Wonder Bible itself.

With that out of the way, it’s not hard to see how quickly and cheaply you could spin-up a device like the Wonder Bible. A microcontroller powerful enough to decode MP3s is hardly a tall order these days, and you’d only need a few spare GPIO pins to run such a simplistic user interface. Toss a battery and speaker into an injection molded enclosure, and all you’re missing to make the product complete is the sprayed on crucifix.

That said, there’s nothing wrong with the build quality on the Wonder Bible. If anything, it’s built like a tank. Glued together and with a screw insidiously hidden under the display bezel, I’m somewhat embarrassed to admit that for the first time in this teardown series I had to physically break the device open to get in. 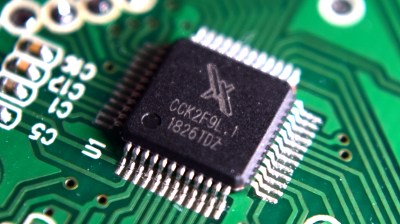 You’ll note there’s no trace of the dreaded black epoxy blobs in the Wonder Bible, but unfortunately that doesn’t help us much in this case. The device is powered by a single SQFP-48 chip labeled CCK2F9L, but I haven’t been able to find any datasheet for it.

The chip does have a very distinctive manufacturer logo on it though, so perhaps one of our Constant Readers will recognize the manufacturer at least.

Beyond the main chip and the 8002 amplifier up by the speaker, there’s not much else on the board. A five pin device by the battery connection is likely the charge controller, though it has no discernible markings to give us a positive ID.

Considering how little the Wonder Bible is sold for (most retailers have them for $15 – $20 USD), the quality and attention to detail is fairly impressive. For example, the speaker is a hefty unit that is loud and sounds pretty good for its size, and the micro SD slot actually has a spring-loaded action. The battery is also a nice removable 18650 cell instead of a silver pouch hot glued into the case.

The display also appears to be custom manufactured, which surely didn’t come cheap. Readability was likely a top concern when designing the Wonder Bible, and the bright LEDs combined with an almost mirror-finished plastic diffuser makes it easily visible from any angle. Even in bright light, the numbers and icons are vibrant and sharp.

Uncovered, we can see an interesting textured black finish on the module as well as the various icons that will light up as the Wonder Bible operates. But we also see something of a mystery: the USB icon. The manual makes no mention of using the USB port on the device for anything but charging, so what could it be for? 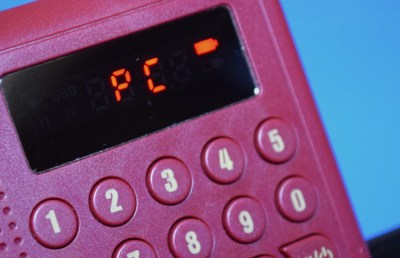 After flipping the PCB back over, a close examination confirmed that the USB port’s data lines were indeed connected. Naturally, I plugged it into my computer to see what it would do. The screen instantly lit up and said “PC”, which seemed like a good sign. Even if it was a bit ironic that the dedicated USB icon apparently isn’t used.

A few seconds later, the micro SD card in the device was mounted on my system and I could see all of the MP3 files. This seemed like a handy enough feature, if somewhat unnecessary given the device’s function. After all, it’s not like the content of the Bible is likely to change in the near future and require an update.

Thinking that an examination of the information the Wonder Bible was reporting to the computer might provide some useful clues, I ran lsusb to see what the kernel had to say about the hardware:

Well, that’s strange. According to this, the hardware was not only being picked up by the kernel’s USB Mass Storage driver, but it’s also coming up as an audio and an input device. A quick check of my system’s audio settings showed that I could indeed select the Wonder Bible as an audio output, and it did a respectable enough job playing the ambient electronic music that serves as the de facto soundtrack of Hackaday.

But what about that Human Interface Device? Looking through /proc/bus/input/devices I was able to see the file it was mapped to by the kernel, and the evtest program let me examine it and listen for events. This showed that while the device reports that it’s able to provide a standard set of media playback controls, it only chimes in when you press the Back and Forward buttons: 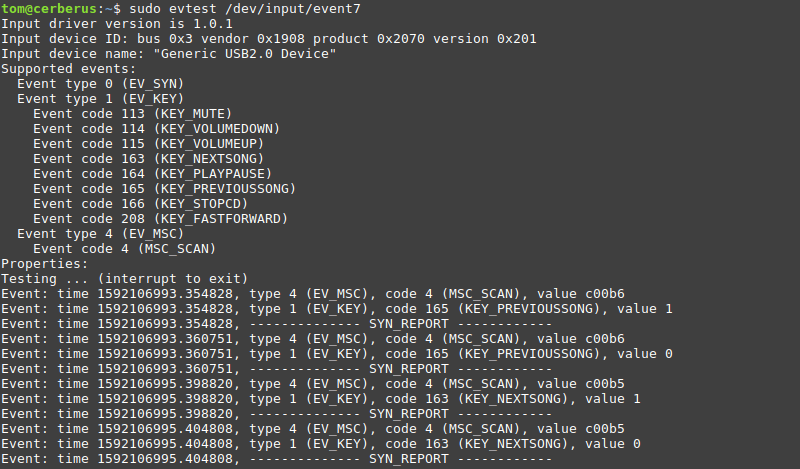 Now why it can do all of this is anyone’s guess. A quick search online shows that GEMBIRD makes a number of MP3 playing gadgets, and these functions could simply be hold-overs from whatever device originally carried this chip. It’s also possible, albeit less likely, that there was some PC side software planned that would allow the user to connect their Wonder Bible to the computer to listen to additional content using the device’s familiar controls.

Ultimately, the Wonder Bible was a pretty interesting device to take a look at. While the hardware is obviously quite simplistic, it’s much better built than I assumed at first glance. You could probably even argue that it’s overbuilt; there are many obvious cost-cutting measures that could have been taken to reduce the production cost of the Wonder Bible, but the manufacturers have decided to take the high road. The teardown also proved to be a good exercise in working with unknown USB devices and identifying what they’re capable of.

So can you buy a second hand Wonder Bible and load it up with back episodes of the Hackaday Podcast? Sure. I’ve done it, and it works fine. You can even navigate through them by typing in the episode numbers on the keypad. But it would be a lot easier to just use your phone. Which in the end is the problem with this piece of hardware: a couple decades ago a surprisingly well made device that could handle hundreds of meticulously organized MP3 files would have been a huge deal, but in 2020 it’s little more than a superfluous gadget.