What’s the most important part of the keycap? The average user-who-cares might tell you it’s the look and feel, but a keyboard builder would probably say the mounting style. That’s where the rubber meets the road, after all. For anyone trying to make their own keycaps, ‘the mount itself’ is definitely the correct answer. Try printing your own keycaps, and you’ll learn a lot about tolerances when it comes to getting the mount right. 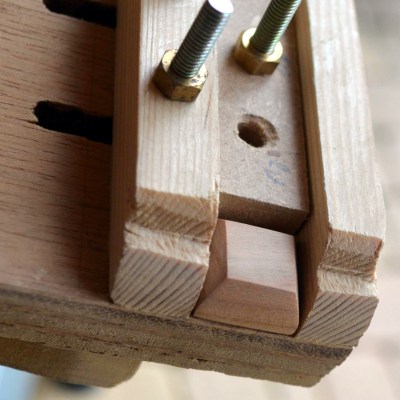 Conversely, you could use a subtractive process like a wood mill to make keycaps. Sounds easy enough, right? But what about all of us who don’t have access to one? [cbosdonnat], who has no CNC, has blazed a cellulose trail, combining hand-tooled wooden keycaps with 3D-printed mounts to create fully-customized keycaps. It’s a great project with concise how-to, especially when it comes to building the jigs needed to keep the keycaps consistently sized and shaped.

It makes a whole lot of sense to start by hollowing out the bottom instead of shaping the business side first or even cutting out the key shape, since the mount is mechanically vital. Why waste time on the look and feel if the foundation isn’t there yet?

Hardwood is a must for DIY keycaps, because the walls need to be thin enough to both fit over the switch and within the matrix, and be sturdy enough not to break with use. We love the look of the varnish-transferred laser-printed logo, and only wish there was a video so we could hear the clacking.

There are all kinds of ways to put legends on DIY keycaps, like waterslide decals for instance.

In CPU design, there is Ahmdal’s law. Simply put, it means that if some process is contributing to 10% of your execution, optimizing it can’t improve things by more than 10%. Common sense, really, but it illustrates the importance of knowing how fast or slow various parts of your system are. So how fast are Linux pipes? That’s a good question and one that [Mazzo] sets out to answer.

The inspiration was a highly-optimized fizzbuzz program that clocked in at over 36GB/s on his laptop. Is that a common speed? Nope. A simple program using pipes on the same machine turned in not quite 4 GB/s. What accounts for the difference?

END_OF_DOCUMENT_TOKEN_TO_BE_REPLACED 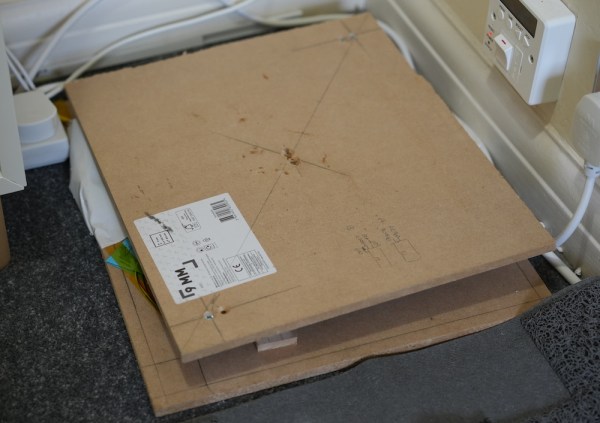 With feline obesity on the rise, keeping track of your cat’s weight is an important part of keeping them healthy. However, a weighing session can be anything from a routine job to a painful procedure, depending on your cat’s temperament. [Andy]’s cat Ellie is one of those who dislike being weighed, so in order to track her weight without drama [Andy] got creative and built an internet-connected weighing platform for her litter box.

The platform consists of two pieces of MDF held apart by two load cells, which are hooked up to an ESP8266. The ESP reads out the load cells and reports its findings to the Adafruit IO platform through its WiFi connection, sending updates to [Andy] whenever litter box use has been detected. The cat’s weight can be simply calculated by subtracting the weight of the unused litter box from the weight measured when it’s in use.

Getting reliable readings from the load cells was a bit of a challenge, since the measured weight fluctuated wildly as Ellie moved around the litter box. A combination of waiting for the readings to settle and using timeouts to discard the effect of brief movements resulted in reasonably stable measurements. The resolution was even good enough to measure the difference in litter weight before and after use. We’re not sure what’s the practical value of knowing how much your cat poops each time, but if the data is there you might as well log it.

[Andy] also imagines smart-home features of the IoT litter box: for example, he could run an air purifier or send in the Roomba after heavy usage. This is not even the first internet-connected litter box we’ve featured; we’ve seen one connected to the Thingspeak platform, as well as one that sends poop alerts through Twitter. If you’re not around to clean up the mess, an automatic fume extractor might come in handy.

END_OF_DOCUMENT_TOKEN_TO_BE_REPLACED 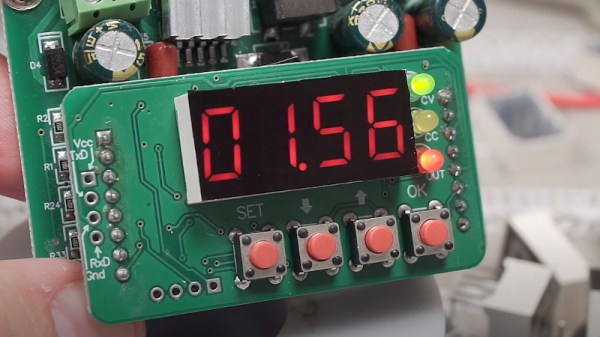 We’re suckers for a nice seven-segment LED display around these parts, and judging by how often they seem to pop up in the projects that come our way, it seems the community is rather fond of them as well. But though they’re cheap, easy to work with, and give off that all important retro vibe, they certainly aren’t perfect. For one thing, their visibility can be pretty poor in some lighting conditions, especially if you’re trying to photograph them for documentation purposes.

If this is a problem you’ve run into recently, [Hugatry] has a simple tip that might save you some aggravation. With a scrap piece of automotive window tint material, it’s easy to cut a custom filter that you can apply directly to the face of the display. As seen in the video, the improvement is quite dramatic. The digits were barely visible before, but with the added contrast provided by the tint, they stand bright and beautiful against the newly darkened background.

[Hugatry] used 5% tint film for this demonstration since it was what he already had on hand, but you might want to experiment with different values depending on the ambient light levels where you’re most likely to be reading the display. The stuff is certainly cheap enough to play around with — a quick check seems to show that for $10 USD you can get enough film to cover a few hundred displays. Which, depending on the project, isn’t nearly as overkill as you might think.

END_OF_DOCUMENT_TOKEN_TO_BE_REPLACED 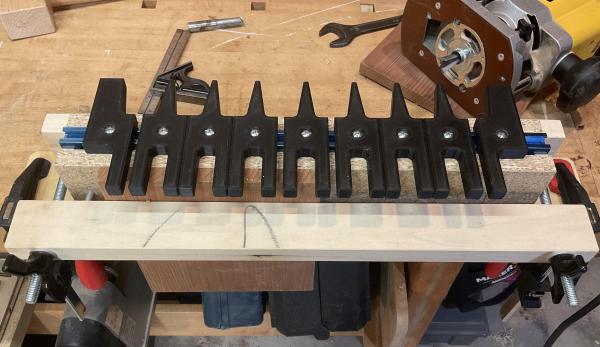 Dovetail joints on a piece of furniture are one of those features that make it say “master carpenter” rather than “IKEA”. Traditional hand-made dovetails require accurate measurements and even more accurate sawing and chiseling, skills that may take years to develop. A slightly less artisanal method is to use a router and a dovetail template; the router makes perfectly straight cuts while the template makes sure it goes only where it needs to go.

If you haven’t got one of those templates yet, check out [Guy Perez]’s design for an adjustable dovetail template that’s easy to produce with a 3D printer. It consists of ten separate pieces mounted on a T-rail, which enables them to slide sideways and thereby generate pins and tails of varying widths. The T-rail is mounted on a wooden body with an integrated clamp to hold the target piece, as well as an endstop to provide a reference for all measurements.

As you can see in the video embedded below, the resulting jig is easy to use and should result in near-perfect dovetails each time. [Guy] made the CAD files available as well as detailed instructions on their design, so you can easily adjust them if you need pieces with a different tail angle or want to use thicker wood.

While this jig will make cutting ordinary dovetail joints a lot easier, you can still show off your manual skills by making an impossible mallet. Want to join metal bits instead? Check out this cute little dovetail cube.

END_OF_DOCUMENT_TOKEN_TO_BE_REPLACED 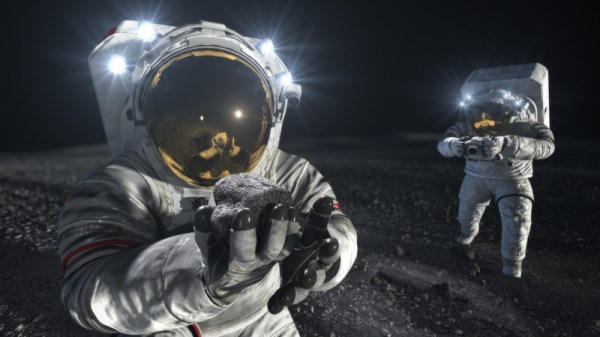 When NASA astronauts aboard the International Space Station have to clamber around on the outside of the orbiting facility for maintenance or repairs, they don a spacesuit known as the Extravehicular Mobility Unit (EMU). Essentially a small self-contained spacecraft in its own right, the bulky garment was introduced in 1981 to allow Space Shuttle crews to exit the Orbiter and work in the craft’s cavernous cargo bay. While the suits did get a minor upgrade in the late 90s, they remain largely the product of 1970s technology.

Not only are the existing EMUs outdated, but they were only designed to be use in space — not on the surface. With NASA’s eyes on the Moon, and eventually Mars, it was no secret that the agency would need to outfit their astronauts with upgraded and modernized suits before moving beyond the ISS. As such, development of what would eventually be the Exploration Extravehicular Mobility Unit (xEMU) dates back to at least 2005 when it was part of the ultimately canceled Constellation program.

Unfortunately, after more than a decade of development and reportedly $420 million in development costs, the xEMU still isn’t ready. With a crewed landing on the Moon still tentatively scheduled for 2025, NASA has decided to let their commercial partners take a swing at the problem, and has recently awarded contracts to two companies for a spacesuit that can both work on the Moon and replace the aging EMU for orbital use on the ISS.

As part of the Exploration Extravehicular Activity Services (xEVAS) contract, both companies will be given the data collected during the development of the xEMU, though they are expected to create new designs rather than a copy of what NASA’s already been working on. Inspired by the success of the Commercial Crew program that gave birth to SpaceX’s Crew Dragon, the contract also stipulates that the companies will retain complete ownership and control over the spacesuits developed during the program. In fact, NASA is even encouraging the companies to seek out additional commercial customers for the finished suits in hopes a competitive market will help drive down costs.

There’s no denying that NASA’s partnerships with commercial providers has paid off for cargo and crew, so it stands to reason that they’d go back to the well for their next-generation spacesuit needs. There’s also plenty of incentive for the companies to deliver a viable product, as the contact has a potential maximum value of $3.5 billion. But with 2025 quickly approaching, and the contact requiring a orbital shakedown test before the suits are sent to the Moon, the big question is whether or not there’s still enough time for either company to make it across the finish line.

END_OF_DOCUMENT_TOKEN_TO_BE_REPLACED

Join Hackaday Editor-in-Chief Elliot Williams and Staff Writer Dan Maloney for a tour of the week’s best and brightest hacks. We begin with a call for point-of-sale diversity, because who wants to carry cash? We move on to discussing glass as a building material, which isn’t really easy, but at least it can be sintered with a DIY-grade laser. Want to make a call on a pay phone in New York City? Too late — the last one is gone, and we offer a qualified “good riddance.” We look at socially engineering birds to get them away from what they should be really afraid of, discuss Apple’s potential malicious compliance with right-to-repair, and get the skinny on an absolute unit of a CNC machine. Watching TV? That’s so 2000s, but streaming doesn’t feel quite right either. Then again, anything you watch on a mechanical color TV is pretty cool by definition.