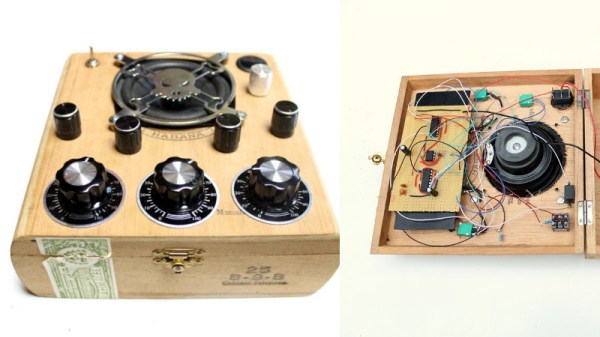 It’s fair to say that the groovebox market has exploded. Store shelves are overflowing with the umpteenth releases from KORG’s Volca line and the latest Pocket Operators. These devices often feature a wide array of tones in an enticingly compact and attractive package, but is it possible to build something similar at home? As [lonesoulsurfer] relates, it certainly is.

The Cigar Box Synth is, well… a synth, built in a cigar box. Based upon a 555 & 556 timer, and a 4017 decade counter, it provides a wealth of beepy goodness all crammed into a neat wooden package. We dig the cigar box form factor, as it’s a readily available wooden box often finished in an attractive way, and readily reworkable for all kinds of projects.

Sound is controlled with three master potentiometers, and there are four separate potentiometers to set the note for each of the four steps in the sequence. While its melodic abilities are limited to just four notes, it’s certainly something fun to play with and can act as a great jumping off point for further electronic experimentation in this area.

It takes us back to our guide on building DIY logic-based synthesizers – read on! 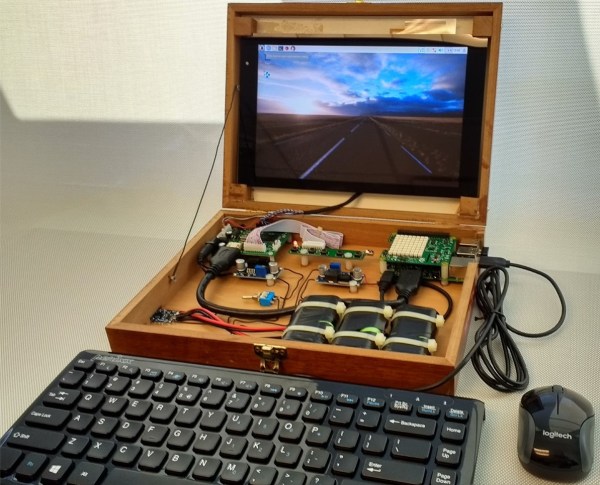 If you were to go back to the middle years of the twentieth century and talk to electronic constructors, you would find a significant number had a cigar box radio among their projects. Cigar boxes were fairly robust, readily available, and could easily accommodate the parts required to make a crystal set or a simple one-tube regenerative receiver. These days there isn’t much attraction to a simple AM radio though, so while they can still be fun to build, the cigar box radio only occupies a niche in vintage radio circles.

Cigar boxes, however, remain. [Mike] found a very nice antique cigar box, and made something unexpected, he put a Raspberry Pi in it and made something close to a laptop. Into the lid goes an LCD screen secured with wooden blocks, while in the body of the box goes the LCD controller, Pi 3, and battery charger and PSU modules. There are two sets of cells, one each for screen and Pi.

We like the idea and we like his write-up for its clear run-down of the modules required even though it’s mostly a plug-together build. We described it as “Something close to a laptop” because it has one glaring omission. He’s using an external keyboard rather than having incorporated one within the case. We think there looks as though there is plenty of room for one, so perhaps he’ll return to the project and upgrade it in that way. For reminding us that cigar boxes can make excellent laptop cases though, we’re thankful.

We’ve featured numbers of Raspberry Pi laptops over the years since the little computer’s launch. Just a small selection are this one using the official touch screen, a rather beautiful one in the style of a Psion palmtop, and one that is rather chunky but has a small footprint. Meanwhile in cigar boxes, we’ve brought you an excellent little 555 organ. 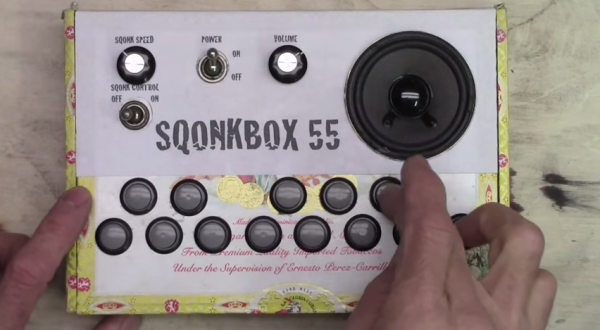 Sometimes, the best birthday presents are the ones you give yourself. In [Dino]’s case, they’re the ones you make for yourself.  In honor of his 55th, he built the Sqonkbox 55, a 13-note cigar box organ based on a 555 and amplified with an LM386.

It’s based on a 555 wired in astable mode, turning it into an oscillator that outputs a frequency. This frequency is determined by the resistors between pins 6 and 7, another between 7 and 8, and the capacitor between pin 2 and ground. [Dino] shows a breadboard version first, with a single tuning pot and momentary acting as a piano key. As he explains, this portion of the circuit is repeated 13 times with pots and momentaries that he arranges like piano keys through the lid of a cigar box.

“Sqonkbox,” you ask? A second 555 in astable mode sends the output through an LED. This LED stands face to face with an LDR, and they are shrouded in this configuration with black heat shrink tubing. The ‘sqonk’ 555 changes the frequency of the first 555, providing a clippy, rhythmic tone at the rate set by a potentiometer. [Dino]’s full video of the build is after the break. A BOM is forthcoming, but it’s easy enough to puzzle it out between the video and the lovely, Forrest Mims-esque schematic.  END_OF_DOCUMENT_TOKEN_TO_BE_REPLACED Start off with a beat, wood sticks on cigar boxes will do. Add some chimes as accent, a Farfisa organ or record player for a voice, several other instruments for harmony and dissonance, and you’re still just on the tip of the iceberg for understanding Cybraphon.

Not only is this antique wardrobe completely autonomous, playing music with over 60 robotic instruments, its song are based on the current mood of the internet. You definitely don’t want to miss the video (or pictures) on this one, catch it after the rift.