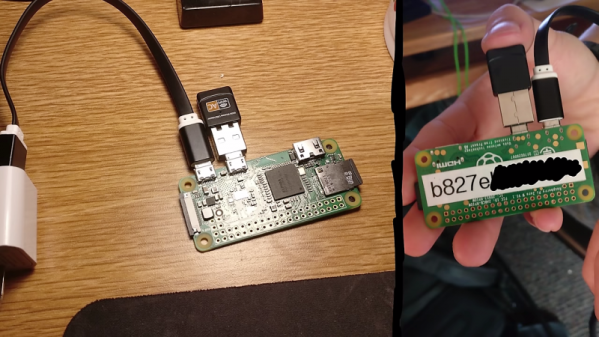 We’re going to warn you right up front that this is not a hack. Or at least that’s how it turned out after [LiveOverflow] did some digital forensics on a mysterious device found lurking in a college library. The path he took to come to the conclusion that nothing untoward was going on was interesting and informative, though, as is the ultimate purpose of the unknown artifacts.

As [LiveOverflow] tells us in the video below, he came upon a Reddit thread – of which we can now find no trace – describing a bunch of odd-looking devices stashed behind garbage cans, vending machines, and desks in a college library. [LiveOverflow] recognized the posted pictures as Raspberry Pi Zeroes with USB WiFi dongles attached; curiosity piqued, he reached out to the OP and offered to help solve the mystery.

The video below tells the tale of the forensic fun that ensued, including some questionable practices like sticking the device’s SD card into the finder’s PC. What looked very “hackerish” to the finder turned out to be quite innocuous after [LiveOverflow] went down a remote-diagnosis rabbit hole to discern the purpose of these devices. We won’t spoil the reveal, but suffice it to say they’re part of a pretty clever system with an entirely non-nefarious purpose.

We thought this was a fun infosec romp, and instructive on a couple of levels, not least of which is keeping in mind how “civilians” might see gear like this in the wild. Hardware and software that we deal with every day might look threatening to the general public. Maybe the university should spring for some labels describing the gear next time.

END_OF_DOCUMENT_TOKEN_TO_BE_REPLACED With that in mind you can deduce that in order to backup your Pi, all you really need to do is backup all of these files. [Matt] has written some scripts to make this a piece of cake (or pie). The first script will simply copy all of the files into a gzipped archive. You can save this to an external SD card, USB drive, or network share.

The second script is perhaps more interesting. This script requires that you have one free USB port and a USB SD card reader. The script will automatically format the extra SD card to contain the two critical partitions. It will then copy the “boot” files to the new boot partition and the root file system files to the new SD card’s root partition. When all is said and done, you will end up with an SD card that is an exact copy of your current running file system.

This can be very handy if you have multiple Pi’s that you want to run the same software, such as in a Pi cluster. Another good example is if you have spent a lot of time tweaking your Pi installation and you want to make a copy for a friend. Of course there are many ways to skin this cat, but it’s always fun to see something custom-built by a creative hacker.