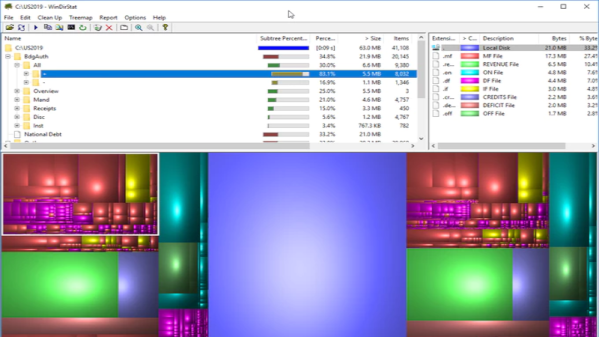 Understanding a national budget can be difficult, with political interests and distorted talking points obscuring the truth. There’s no substitute for diving into the hard data yourself, but it can be difficult to know where to start. [D. Scott Williamson] wanted to do just that, and took an unconventional path – using file system tools to analyse the 2019 US budget.

The basic idea is simple. A file is created for every line item on the budget, and this file is filled with a $ for every million dollars that item costs. These files are sorted into folders for the relevant bureaus and agencies responsible, creating a Fiscal File System representation of the entire budget. The file system can then be analysed with standard tools to get a look at the overall make up of the budget – in this case, WinDirStat does a particularly good job.

It’s a novel way to go about budget analysis, and fills a gap in the market now that Time Plots aren’t producing their Death and Taxes infographics anymore. Pre-cooked file systems covering budgets back to 1977 are available for your perusal, should you need to investigate how things have changed over time.

Unsurprisingly, we haven’t covered the national budget before, but we’re always down to talk file systems. 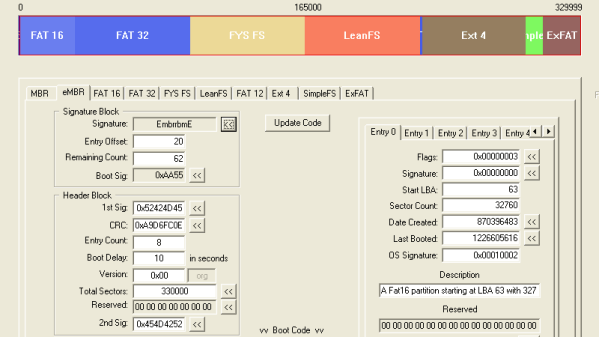 Whether you’re at the hobbyist level or a professional, if you’re working on code for operating systems or file systems, tools can make or break the job. [Ben Lunt] is an enthusiast hacker himself, and found that over time, a series of useful utilities had proliferated beyond reasonable management. It was time to solve the problem – enter ULTIMATE.

ULTIMATE is a combination of a wide swathe of file system hacking tools that [Ben] had developed over the preceding years. Capable of dealing with most FAT variants, Ext4, ISO, [Ben]’s own FYS FS as well as other Linux ephemera, it enables a wide variety of common tasks to be executed from within a single program.

Capabilities of the tool are wide ranging. Files can be inserted into and removed from image files, boot records can be altered, and there’s even the ability to tinker with GPTs for UEFI-based systems. [Ben] has also experimented with the concept of the eMBR – an extended Master Boot Record with greater functionality for larger, modern hard drives.

ULTIMATE is a testament to [Ben]’s broad file system knowledge, and could likely serve useful to many hackers in the file system and OS community. Just be cautious, though – the software is still in an early stage of development. If you’re just getting started in this particular realm of tinkering, take our primer on file system forensics. 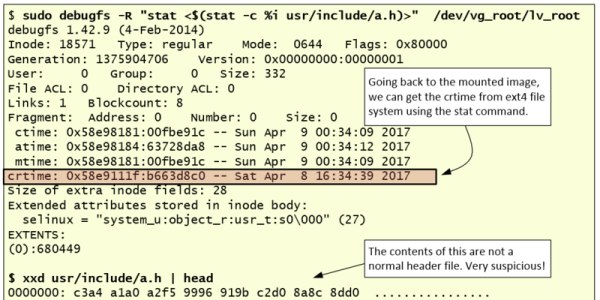 The old saying is if your data isn’t backed up at least twice, it’s not backed up at all. For those not wise enough to heed this adage, there are a number of options available to you if you wish your data to be recovered. Assuming the drive itself is just corrupted somehow (maybe a malicious attack, maybe a user error) and not damaged beyond physical repair, the first step is to connect the drive to another computer. If that fails, it might be time to break out the computer forensics skills.

[Luis]’s guide is focused on Linux-specific drives and recovery tools, so this isn’t necessarily a general-purpose how-to. That being said, there is a lot of information in this guide such as how to mount the target drive’s partitions, how to set up various timelines, and which of the Linux system’s logs are important for the forensic analysis. This specific example in the guide also goes into detail about noticing which of the recent files had been accessed, what they might have done, and different approaches to piecing the mystery of this corrupted drive together.

[Luis] points out that the world of Linux forensics is much different from that of Windows, but for anyone looking to get started he suggests starting with a clean Linux install and going from there. There are many other avenues of digital forensics, as well; the field has as many avenues of exploration as there are different types of computers.

Usually, you think of solid state storage as faster than a rotating hard drive. However, in the case of the Raspberry Pi, the solid state “disk drive” is a memory card that uses a serial interface. So while a 7200 RPM SATA drive might get speeds in excess of 100MB/s, the Pi’s performance is significantly less.

[Rusher] uses the Gluster distributed file system and Docker on his Raspberry Pi. He measured write performance to be a sluggish 1MB/s (and the root file system was clocking in at just over 40MB/s).

There are an endless number of settings you could tweak, but [Rusher] heuristically picked a few he thought would have an impact. After some experimentation, he managed 5MB/s on Gluster and increased the normal file system to 46 MB/s.