Has reflowing surface mount components got you down? [Giorgos] is currently working on a project that will lift your spirits…. well at least your hot air gun. Tired of manually holding his heat gun in one hand and IR thermometer in the other, [Giorgos] set out to create a device to alleviate just that. Although not completed yet, it appears the machine’s intent is to hold the heat gun at an appropriate height above the work piece in order to achieve the correct reflow temperature. He doesn’t say how the height of the hot air gun will be controlled. We’d like to see a microcontroller adjust the height of the hot air gun depending on the temperature of the component to be reflowed. [Giorgos] gives an extremely detailed account of his build process. Make sure to check out all four pages of the project post!

We’ve seen a lot of interesting work from [Giorgos] over the years like this capacitive touch-pad entry system. A quick primer is in order: when it comes to hobby brewing there’s two main types, extract brewing and all-grain brewing. The former uses a syrup that has been extracted from the grains at a factory while the latter adds the steps to do this yourself. But in both cases the brewing grains have already been malted. This is a careful process of soaking the grains and then kiln drying them. [Richard Oliver] built his own malt kiln controller to add the preliminary step to his home brewing ritual. Now the only thing he’s not doing himself is growing the grains (and perhaps culturing the yeast).

His original design used a food dehydrator for the drying step, but this didn’t work because the temperature wasn’t at the correct level. The new build uses the ceramic heating element from a 300W hot air gun. A blower directs air through the element and into the wooden box that serves as the kiln. An Arduino monitors the heated air to keep it right in the sweet spot. He’s included a graphing GUI for easy monitoring, which is shown in the video after the break.

END_OF_DOCUMENT_TOKEN_TO_BE_REPLACED Personally we find this Ball-Grid Array chip-swap rather horrifying. But if you want to beef up the processor on your 701 Eee PC this is what you’ll need to go through. Not only did [Red Fathom] upgrade to a 1.6 GHz chip, but he managed to get the computer to boot up with the new hardware in place.

BGAs are notoriously hard to solder. This hack pulls it off using just a hot air gun. [Red Fathom] heats the board from the underside until the solder melts and he can pluck off the old chip. He then uses a solder braid and iron to remove extra solder from the footprint. After a little cleanup with a cotton swab and some flux he plops in an Intel Pentium M LV 778. It doesn’t look like he added any solder after the cleaning process. Perhaps he’s relying on the small amount left on the tinned pads of the board?

After the break you can see the soldering process and a video of the new processor booting Xandros.

END_OF_DOCUMENT_TOKEN_TO_BE_REPLACED 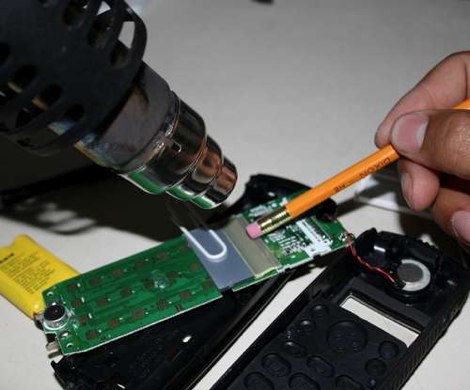 When most people encounter dead pixels on an LCD text display, they figure that the display is dead and they decide to scrap it. However when the LCD display on one of [Joe]’s cordless phones started to show dead rows and columns of pixels, [Joe] decided that he could fix it. With only a pencil eraser, a hot air gun, and a screwdriver (for disassembly), [Joe] was able to fix his phone’s screen in just under 10 minutes. His process involves heating the glue holding the LCD’s ribbon cable to the phones PCB with a hot air gun and using a pencil eraser to reattach segments of the ribbon cable to the PCB. If anyone here has a problem similar to [Joe]’s, be sure to check out his detailed how-to complete with step-by-step pictures.