It’s easy to get jaded by gadgets like the Chromecast or Sonos, which let the user control AV equipment remotely from a mobile device or computer. You can pick something to play from your phone and send it off to your speakers via the magic of Wi-Fi. But it’s still nice to have a display to look at for music visualizations and that sort of thing, at least occasionally. 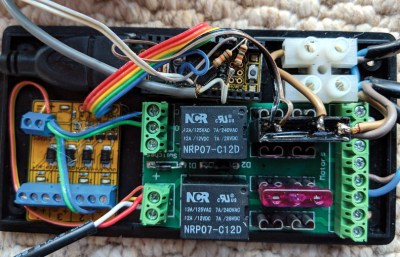 To address this only occasional desire to have a display on your media setup, you could follow in the footsteps of [Steven Elliott] and create a DIY motorized display which only pops up when needed. Inspired by seeing videos of TVs rising out of cabinets and other such trickery, he decided to create his own version using an old computer monitor he had lying around.

The monitor is lifted with a beefy linear actuator, which has been placed inside of a square metal fence post to keep from rotating. It already had a power supply and control board with relays for extending and retracting, so [Steven] just needed to find a convenient way of firing them off.

The answer came from a somewhat unconventional source: his amplifier. [Steven] explains that many amplifiers feature a “Trigger Output”, which uses a standard stereo 3.5mm connector and sends a 12V pulse to connected device. This is generally used to turn on downstream devices when the amplifier switches to the respective input. It’s too short and not nearly powerful enough to close the actuators relays, but it’s easy enough to detect.

[Steven] uses a LeoStick microcontroller to wait for the pulse from the amplifier, and then use that to raise or lower the display depending on the selected input. There’s also a SPST momentary switch which can be used to trigger the actuator manually. Beyond the fact the linear actuator is a bit loud, he says the setup works very well and prevents him from having to start up his projector if he just wants to take a quick glance at what’s playing or program his DVR.

We don’t see many motorized display lifts like this anymore, not since wall mounted LCDs became popular anyway. But it’s still a cool effect, and today made quite a bit easier thanks to the fact that TVs and monitors no longer weigh as much as a small car.

When you think about the materials for your next large dancing robot build, soda bottles might not be the first thing that springs to mind. But they could work, according to TrussFab, a project from a group of students at the Hasso Plattner Instituit. Their system uses empty coke bottles and 3D printed connectors to build large structures, modeled in software that checks their load balance and safety. The team has modeled and built designs up to 5 meters high. Now, the project has taken a step further by adding linear actuators and hinges to the mix so you can create things that move, including a 4-meter high animatronic robot.

END_OF_DOCUMENT_TOKEN_TO_BE_REPLACED

Our open source community invites anyone with an idea to build upon the works of those who came before. Many of us have encountered a need to control linear motion and adapted an inexpensive hobby servo for the task. [Michael Graham] evaluated existing designs and believed he has ideas to advance the state of the art. Our Hackaday Prize judges agreed, placing his 3D Printed Servo Linear Actuator as one of twenty winners of our Robotics Module Challenge.

[Michael]’s actuator follows in the footstep of other designs based on a rack-and-pinion gear such as this one featured on these pages, but he approached the design problem from the perspective of a mechanical engineer. The design incorporated several compliant features to be tolerant of variances between 3D printers (and slicer, and filament, etc.) Improving the odds of a successful print and therefore successful projects. Beginners learning to design for 3D printing (and even some veterans) would find his design tips document well worth the few minutes of reading time. 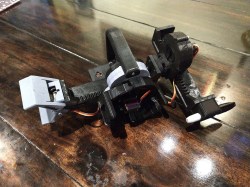 Another useful feature of his actuator design is the 20mm x 20mm screw mounting system. Visible on either end of the output slider, it allows mixing and matching from a set of accessories to be bolted on this actuator. He is already off and running down this path and is facing the challenge of having too many things to share while keeping them all organized and usable by everyone.

The flexible construction system allows him to realize different ideas within the modular system. He brought one item (a variant of his Mug-O-Matic) to the Hackaday + Tindie Meetup at Bay Area Maker Faire, and we’re sure there will be more. And given the thoughtful design and extensive documentation of his project, we expect to see his linear servos adopted by others and appear in other contexts as well.

This isn’t the only linear actuator we’ve come across. It isn’t even the only winning linear actuator of our Robotics Module Challenge, but the other one is focused on meeting different constraints like compactness. They are different tools for different needs – and all worthy additions to our toolbox of mechanical solutions. 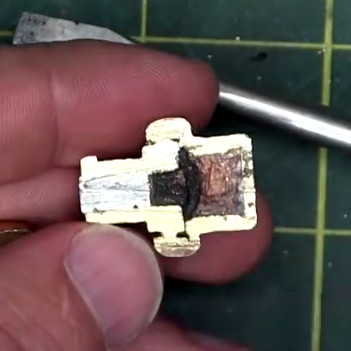 END_OF_DOCUMENT_TOKEN_TO_BE_REPLACED

RC servos are a common component in many robotics projects, but [Giovanni Leal] needed linear motion instead of the rotary actuation that servos normally offer. The 3D Printed Mini Linear Actuator was developed as a way to turn a mini servo into a linear actuator, giving it more power in the process.

A servo uses a potentiometer attached to the output shaft in order to sense position, and the internal electronics take care of driving the motor to move the shaft to the desired angle. [Giovanni] took apart an economical mini servo and after replacing the motor with a 100:1 gear motor and using it to power a compact 3D printed linear actuator, he used the servo’s potentiometer to read the linear actuator’s position. As a result, the linear actuator can exert considerably more force than the original servo while retaining exactly the same servo interface. You can see one being assembled and tested in the video embedded below, which is part of [Giovanni]’s entry for The 2018 Hackaday Prize.

END_OF_DOCUMENT_TOKEN_TO_BE_REPLACED

Fathers of Hackaday, we’ve got bad news — you’ve been out-fathered. Behold the mechanism of your undoing: a working miniature excavator, executed in plywood.

To be fair, the rules of the game have changed lately. Time was when a nipper would ask for the impossible, and we dads would never have to deliver. But with CNC routers, 3D-printing, and industrial-grade CAD software you can use for free, the possibility hurdle is getting ever shorter. Still, when his son put in this request, [Alex Lovegrove] really delivered. Everything on this excavator works, from tracks to boom to bucket. There are hundreds of parts, mostly machined from plywood but with a smattering of 3D-printed gears and brackets. The tracks and slew gear are powered by gear motors, while linear actuators stand in for hydraulic rams on the boom. The videos below show the machine under test and the unbearable cuteness of it being loved.

Hacker parents need not despair, of course. There’s plenty of room left for your imagination to run amok. For inspiration, check out this working railway system, or any of the several backyard roller coasters we’ve featured.