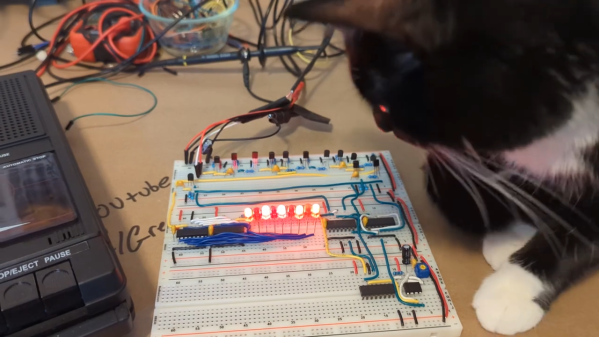 It’s been a long time since computer hobbyists stored their programs and data on cassette tapes. But because floppy drives were expensive peripherals and hard drives were still a long way from being the commodity they are today, cassettes enjoyed a long run at the top of the bulk data storage heap.

Celebrating that success by exploring the technology of cassette data storage is the idea behind [Greg Strike]’s Kansas City decoder project, which he hopes to use with his [Ben Eater]-style 6502 computer. The video below explains the Kansas City standard in some detail, and includes some interesting historical context we really hadn’t delved into before. There are also some good technical details on the modulation scheme KCS used, which [Greg] used to base his build. After a failed attempt to use an LM567 tone decoder chip, he stumbled upon [matseng]’s KCSViewer project, which decodes KCS-encoded audio signals using nothing but discrete components.

[Greg]’s prototype has a comparator to convert sine waves to square waves, followed by pair of monostable timers, each tuned to either the high or low frequency defined in the KCS specs. A test signal created using Audacity — is there anything it can’t do? — was successfully decoded, providing proof of concept for the project’s first phase. We’re looking forward to the rest of the series, which will turn this into an actual decoder, and presumably add an encoder as well.

Listeners of the Hackaday Podcast may recall we experimented with using KCS to hide some data within an episode a few months back.

END_OF_DOCUMENT_TOKEN_TO_BE_REPLACED 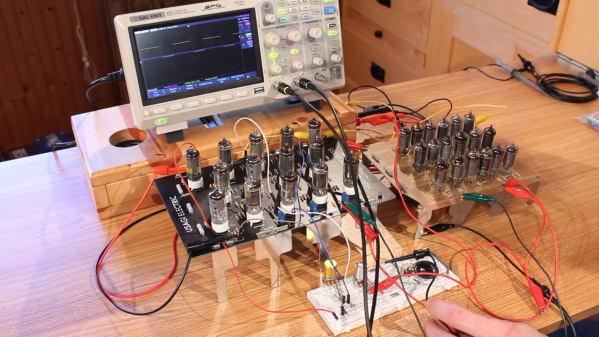 Most of us have beheld the sonic glory of an Atari Punk Console, that lo-fi synth whose classic incarnation is a pair of 555 timers set up to warble and bleep in interesting ways. Very few of us, however, have likely seen an APC built from 555s that are made from vacuum tubes.

It’s little surprise to regular readers that this one comes to us by way of [David] at Usagi Electric, who hasn’t met a circuit that couldn’t be improved by realizing it in vacuum tubes. His “hollow-state” Atari Punk Console began with the 18-tube version of the 555 that he built just for fun a while back, which proved popular enough that he’s working on a kit version, the prototype of which served as the second timer for the synth. With 32 tubes aglow amid a rats-nest of jumpers, the console managed to make the requisites sounds, but lacked a certain elegance. [David] then vastly simplified the design, reducing the BOM to just four dual-triode tubes. Housed on a CNC milled PCB in a custom wood box, the synth does a respectable job and looks good doing it. The video below shows both versions in action, as well as detailing their construction.

As cool as a vacuum tube synth may be, we realize that not everyone goes for the hot glass approach. No worries — plenty of silicon Atari Punk Consoles to choose from here. There’s one built into a joystick, a circuit sculpture version complete with mini-CRT, or even eight APCs teamed up with MIDI control.

END_OF_DOCUMENT_TOKEN_TO_BE_REPLACED 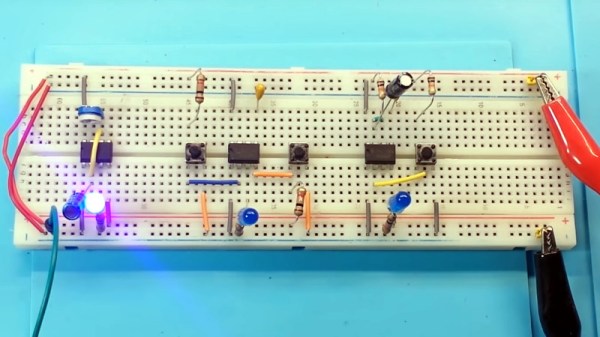 In these days of cheap microcontrollers, it is hard to remember there was a time when timing things took real circuitry. Even today, for some applications it is hard to beat the ubiquitous 555 timer IC. It is cheap, plentiful, and reliable. What’s interesting about the 555 is it isn’t so much a dedicated chip as a bunch of building blocks on a chip. You can wire those building blocks up in different ways to get different effects, and [learnelectronics] has a video showing the three major modes you typically see with the 555: astable, bistable, and monostable.

The 555 is really only a few comparators, a voltage divider, one or two transistors, a flip flop and an inverter. The idea is you use a capacitor to charge and the comparators can set or reset the flip flop in different ways. A reset input or the flip flop can turn on the transistor to discharge the capacitor.

END_OF_DOCUMENT_TOKEN_TO_BE_REPLACED 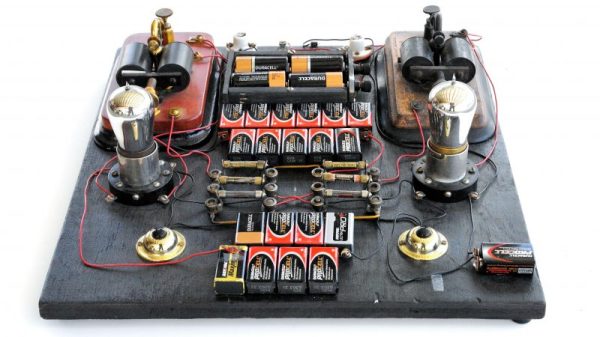