Like many retro favourites, the Game Boy is in no way dead — development continues apace through its many fans.But what about the hardware side? This is a particularly interesting one: [Alex] wondered if a Game Boy could be readily used as a wireless controller. Set out to make it happen, the final product is a game cartridge that makes the classic handheld a wireless controller. 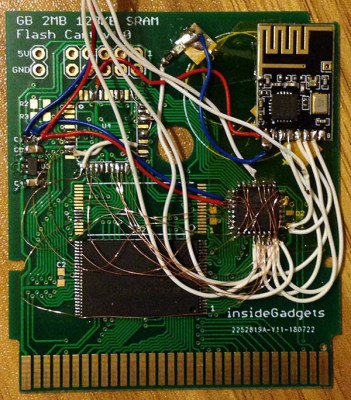 It’s achieved quite elegantly, with a custom cartridge used to turn the Game Boy into a controller while requiring no modification to the handheld. The cartridge contains a flash chip to store the ROM, along with an ATmega48PA microcontroller and an NRF24L01 to do the talking. Upon powerup, the Game Boy runs code from the ROM, and the microcontroller is in charge of reading button states and sending them to the NRF24L01 for transmission. The program stored on the ROM also allows configuration changes to be made from the Game Boy itself, such as choosing the appropriate wireless channel.

The cartridge transmitter can be used with a variety of receivers. [Andy] has developed a USB HID joystick emulator to allow the Game Boy to be used with PCs, as well as a receiver for the GameCube, too. Yes, that’s right — you can now play Super Smash Bros. with a weirder controller than all your friends. A Super Nintendo version is also in the works. Perhaps the coolest feature, however, is that the cart can use its radio link to communicate with another Game Boy running the same cartridge. [Andy] demonstrates this with a basic game of Pong being played between two Game Boy Advances.

Working on retro hardware can be great fun — things are well documented, parts are cheap, and there’ll be plenty of fans cheering you on, too. [Andy] has even made the hardware available for purchase on Tindie and his website if you’re not quite comfortable rolling your own.

The Game Boy platform remains ripe for hacking – you can even take screenshots with a logic analyzer these days. Video after the break.

END_OF_DOCUMENT_TOKEN_TO_BE_REPLACED

[Furrtek] is a person of odd pursuits, which mainly involve making old pieces of technology do strange things. That makes him a hero to us, and his latest project elevates this status: he built a device that turns the Nintendo Gameboy camera cartridge into a camcorder. His device replaces the Gameboy, capturing the images from the camera, displaying them on the screen and saving them to a micro SD card.

Before you throw out your cellphone or your 4K camcorder, bear in mind that the captured video is monochrome (with only 4 levels between white and black), at a resolution of 128 by 112 pixels and at about 14 frames per second. Sound is captured at 8192Hz, producing the same buzzy,  grainy sound that the Gameboy is famous for. Although it isn’t particularly practical, [Furrtek]s build is extremely impressive, built around an NXP LPC1343 ARM Cortex-M3 MCU processor. This processor repeatedly requests an image from the camera, receives the image and then collects the images and sound together to form the video and save it to the micro SD card. As always, [Furrtek] has made all of the source code and other files available for anyone who wants to try it out.

For those who aren’t familiar with his previous work, [Furrtek] has done things like making a Speak & Spell swear like a sailor, adding a VGA out to a Virtualboy, and hacking a Gameboy Color to control electronic shelf labels.

END_OF_DOCUMENT_TOKEN_TO_BE_REPLACED END_OF_DOCUMENT_TOKEN_TO_BE_REPLACED

[Adan] had an old Game Boy sitting around, and without anything better to do decided to investigate the link cable protocol with a microcontroller. He had a Stellaris Launchpad for the task, but initially had no project in mind. What he came up for this adventure in serial protocols is a first gen Pokemon trade spoofer that allows him to obtain pokemon without having two Game Boys, or for the weird ones out there, “friends.”

The Game Boy link protocol is extremely well documented (dead link, try Internet Archive), so getting data from the Game Boy to the Launchpad was as simple as a soldering up an old link cable connector to a piece of perf board. After figuring out the electronics, [Adan] looked at what happened when two Pokemon games tried to trade pokemon. When two Game Boys are linked, there are two in-game options: trade or battle. Looking at the data coming after the ‘trade’ option, [Adan] found something that could possibly be the data structure of the Pokemon being sent. He reverse-engineered this all by himself before discovering this is also  well documented.

Bringing everything together, [Adan] figured out how to trade non-existent Pokemon with a small dev board. Right now he’s only transmitting Pokemon that are hard-coded on the Launchpad, but it’s very possible to transmit the Pokemon values in real-time over USB.

Thanks [Dan] for sending this in, and no, we don’t know what’s up with the influx of Pokemon posts over the last week. Video of the spoof below.