Last month we brought you word of tonyhax, a clever exploit for the original Sony PlayStation that leveraged a buffer overflow in several of the games from the Tony Hawk Pro Skater series to load arbitrary code from a specially prepared memory card. But now [Bradlin] has taken that idea a step further and developed a software exploit for Sony’s iconic console that doesn’t need to be triggered from a game.

The exploit is considerably more complex this time around, but [Bradlin] does an excellent job of breaking it down for those who want the gritty details. The short version is that missing boundary checks in the PlayStation’s built-in memory card handling routines mean a carefully formatted “block” on the memory card can get the console to execute a small 128 byte payload. That’s not a lot of room to work with, but it ends up being just enough to load up additional code stored elsewhere on the memory card and really kick things off.

Unlike tonyhax, which was designed specifically to allow the user to swap their retail Tony Hawk disc with a game burned to a CD-R, [Bradlin]’s FreePSXBoot is presented as more of a generic loader. As of right now, it doesn’t allow you to actually play burned games, although its inevitable that somebody will connect those last few dots soon.

If you want to check out the progress so far, all you need is wire a PlayStation memory card up to an Arduino, write the provided image to it, and stick it in the slot. [Bradlin] says the exploit doesn’t work 100% of the time (something else that will surely be addressed in future releases), but it shouldn’t take too many attempts before you’re greeted with the flashing screen that proves Sony’s 27 year old console has now truly been bested.

END_OF_DOCUMENT_TOKEN_TO_BE_REPLACED 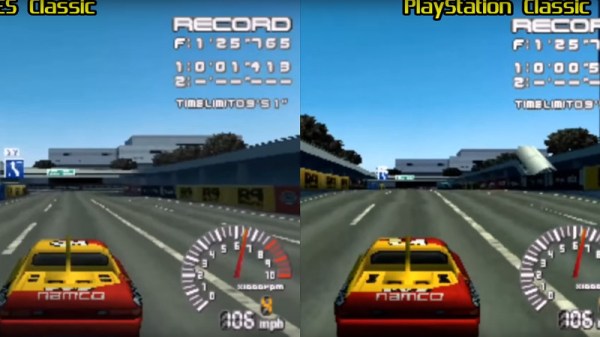 Fans of game consoles from the golden era of TV game appliances have been in for a treat over the past couple of years as a slew of official reboots of the stars of the past have reached the market. These so-called “classic” consoles closely follow the styling of the originals, but under the hood they pack modern hardware running an emulator to play a selection of games from ROM. Even better, with a bit of hacking they can run more than just the supplied emulator, people have managed to use them to emulate completely different consoles. Even then, it’s unexpected to find that a PlayStation emulator on a Super Nintendo Classic runs PlayStation games better than the same emulator built in to Sony’s own PlayStation Classic console.

The feat from [8 Bit Flashback] is achieved despite both machines having near-identical hardware specifications based upon the Allwinner R16 system-on-chip. The Nintendo provides smoother action and more responsive controls, making for a far superior gaming experience. How is this achieved? The most significant difference is that the SNES Classic had the RetroArch front end installed upon it, which may have lent some optimisations and tweaks to make the system more efficient.

Readers with an eye for unusual consoles may remember another Nintendo/Sony hybrid, the ill-fated early-1990s prototype SNES with a CD-ROM which was the first machine to bear the name “PlayStation” (or “Play Station” as it was sometimes styled, leading Sony marketeers to be hot on writers using a space between the words a few years later).

END_OF_DOCUMENT_TOKEN_TO_BE_REPLACED

Over in Russia there are a few people doing extremely in-depth technical teardowns, and the latest is one of the most ambitious ever seen. The PSXDEV team is tearing into the heart of the original PlayStation (Google translatrix), looking at 300,000 transistors, and re-implementing the entire console in a logic level simulator.

While the CPU in the PSX is unique to that specific piece of hardware, a lot of this custom silicon can be found in other places. The core – a RISC LSI LR33300 – is documented in a few rare tomes that are somehow available for free on the Internet. Other parts of this chip are a little stranger. There is a bizarre register that isn’t documented anywhere, a Bus Unit that handles the access between various devices and peripherals, and a motion picture decompressor.

The reverse engineering process begins by de-encapsulating the CPU, GPU, sound processing unit, and CD-ROM controller, taking very high magnification photos of the dies, and slowly mapping out the semiconductors and metals to figure out what cells do what function, how they’re connected, and what the big picture is. It’s a painstaking process that requires combing through gigabytes of die shots and apparently highlight gates, wires, and busses with MS Paint.

The end result of all this squinting at a monitor is turning tracings of chips into logic elements with Logisim. From there, the function of the CPU can be understood, studied, and yes, eventually emulated down to the gate level. It’s an astonishing undertaking, really.

If this sort of thing sounds familiar, you’re right: the same team behind PSXDEV is also responsible for a similar effort focused on the Nintendo Entertainment System. There, the CPU inside the NES – the Ricoh 2A03 – was torn down, revealing the 6502 core, APU, DMA, and all the extra bits that made this a custom chip.

Thanks [Rasz] for the tip.

[Kevin] just finished a project for someone who lives in his apartment complex. This resident loves the game Pop ‘n Music – a Guitar Hero sort of game for the original Playstation and PS2 that uses nine colored buttons instead of five buttons along a fingerboard. His original idea was to wire up a few arcade buttons to a Playstation controller but this plan fell through, forcing [Kevin] to figure out the PSX bus all by his lonesome.

The initial code began with simply bit-banging the PSX controller interface with an AVR. This had a few problems, namely speed, forcing [Kevin] to move onto assembly programming to squeeze every last bit of performance out of a microcontroller.

The assembly route failed as well, dropping some transactions  Looking at the problem again, [Kevin] realized the PSX controller bus looked a little like an SPI bus. There were a few changes required – reversing the order of the bits, and using the MISO line to drive a transistor – but this method worked almost perfectly on the first try.

Now, [Kevin]’s building mate has a custom Playstation controller for his favorite game. Of course all the code is up on github for all your PSX controller emulation needs, but be sure to check out this completely unrelated Pop ‘N Music video from someone who desperately needs a piano. We’d bet you didn’t know there was a Nyan Cat game for the original PlayStation. Well, there wasn’t one until very recently. This isn’t a title that has been licensed by Sony, and we bet you won’t spend hours playing such a thing. But the concept has let [Haunted] hone his development skills.

We’re not certain how he’s getting around the copy protection for PSX games, but we know there are a few different exploits out there. If you happen to have your own method playing homebrew games you can even download the bin/cue files to try this out for yourself.

After the break you can watch a demo clip of the game. It boots like normal until you hit a black screen with white text which displays a loading percentage. This is followed closely by the rainbow spewing feline pastry. The sound takes a minute to play but you can be sure it’s there. Currently there’s no scoring system but that’s in the works for a future revision.

END_OF_DOCUMENT_TOKEN_TO_BE_REPLACED END_OF_DOCUMENT_TOKEN_TO_BE_REPLACED

On the off chance that you want to program a microcontroller to play your games for you, you should check this out. Near Future Laboratories has made a dongle that can allow an Arduino to operate as a PS2 or PS3 controller. You can see the Arduino running a random path generator in Katamari Damacy in the video above. They wanted to see how long it would take to clear a room. It managed to get almost all of them in about 70 minutes, only missing those that you have to cross a narrow bridge for. Actually, this could be quite useful in allowing people to create alternative input methods. You may recall reading about their early progress back in June 2008.