[David Burroughs] wrote in to share this dial telephone museum exhibit he built and we’re glad he did because we love interactive museum hacks. He mentions that it’s not really tied to the theme of the Roads and Rails Museum in which it’s installed. But when we think of railroad history we also think of telegraph. And that’s just a hop, skip, and a jump from telephones.

The display allows museum goers to play with the rotary dial on the phone. The box next two it contains a 10-position relay increment switch. So each pulse from the dial increments the switch. There’s a satisfying click, a moving arm, and different colored LEDs which highlight the inner workings. An Arduino board monitors the phone, displaying the dialed number on a seven segment display then incrementing the relay.

We figure the interesting part is to see that telephony used to use mechanical switching like this. But the video below includes a story about the kid who asked how you carried this phone around. This brings to mind the phrase “hang up the phone”, which doesn’t have the same literal meaning it used to.

END_OF_DOCUMENT_TOKEN_TO_BE_REPLACED 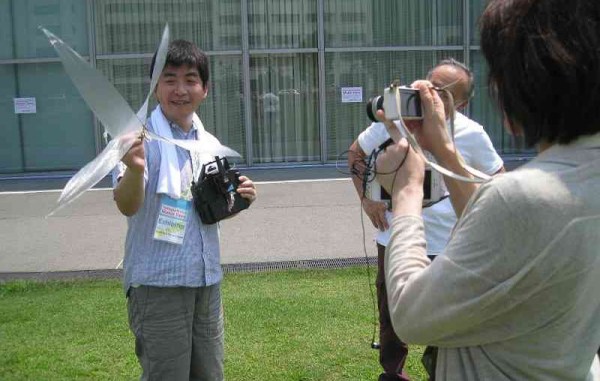 We’re actually going to link to an old post from back in February because we think it’s equally as impressive as the most recent work. This is a 3D printed ornithopter powered by a rubber band (translated). The frame is much like a traditional rubber band plane. The difference is that after winding it up it doesn’t spin a propeller. The flapping of the four plastic membrane wings makes it fly like magic. Seriously, check out the demo below… we almost posted this as “Real or Fake?” feature if we hadn’t seen similar offerings a couple of years back.

The flight lasts a relatively long time when considering the quick winding before launch is all that powered it. But the most recent offerings (translated) from the site include the motorized ornithopter design seen above. It carries a small Lithium cell for continuous flight. These designs have a 3D printed gear system which makes them a bit more complicated, but brings steering and remote control to the party. If you want one of your own they’re working on a small run of kits. We figure it’d be a lot more fun to prototype and print your own. Sure, it’s reinventing the wheel. But it’s a really cool wheel!

END_OF_DOCUMENT_TOKEN_TO_BE_REPLACED 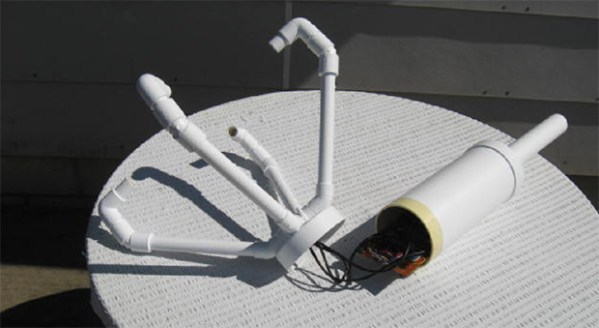 With his meteorological interests, [Carl] builds weather stations. Temperature and humidity sensors are a dime a dozen, but with his DIY ingenuity, [Carl] has built some very interesting and complicated devices. The latest of which is an ultrasonic wind sensor that uses the time of flight of ultrasonic pulses to detect how fast the wind is blowing.

[Carl]’s sensor uses four ultrasonic transducers aligned to North, South, East, and West to detect the wind speed. By measuring the time it takes an ultrasonic pulse to travel between the sensors indoors, Subtracting the in-situ measurement gives him the time of flight for each axis, and thus the wind speed.

It’s an impressive display of engineering that comes with an amazingly detailed design report. After three months of operation, [Carl] has found his ultrasonic anemometer is better than the traditional mechanical ‘egg-cup’ anemometer at measuring low wind speeds. The only real problem with the build is the fact the design makes a great bird perch, but some fine steel wire quickly corrected that problem. 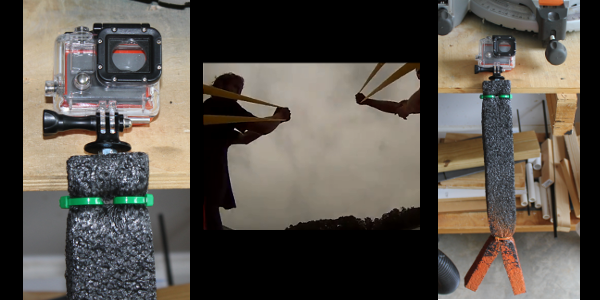 Want to try out aerial photography, but can’t afford a quadcopter? [Jeremy] rigged up a low cost GoPro Slingshot and took some pretty nice flyover shots of the lake.

The slingshot itself is meant for water balloons, but easily has enough power to fire the camera. In order to get good video, some stabilization was needed. [Jeremy] made a stabilizing fin out of packaging foam, and used an eye bolt to connect it to the GoPro’s threaded tripod mount. The simple tail fin made of out foam and zip ties actually did a good job of stabilizing the camera.

This looks like a fun experiment to try when you’re at the lake, since you can probably build it with stuff lying around the house. For [Jeremy], it also proved to be a way to keep his dog entertained since she retrieved the camera after each shot. After the break, check out the video footage from the GoPro slinging rig.

END_OF_DOCUMENT_TOKEN_TO_BE_REPLACED

[Kevin] just finished a project for someone who lives in his apartment complex. This resident loves the game Pop ‘n Music – a Guitar Hero sort of game for the original Playstation and PS2 that uses nine colored buttons instead of five buttons along a fingerboard. His original idea was to wire up a few arcade buttons to a Playstation controller but this plan fell through, forcing [Kevin] to figure out the PSX bus all by his lonesome.

The initial code began with simply bit-banging the PSX controller interface with an AVR. This had a few problems, namely speed, forcing [Kevin] to move onto assembly programming to squeeze every last bit of performance out of a microcontroller.

The assembly route failed as well, dropping some transactions  Looking at the problem again, [Kevin] realized the PSX controller bus looked a little like an SPI bus. There were a few changes required – reversing the order of the bits, and using the MISO line to drive a transistor – but this method worked almost perfectly on the first try.

Now, [Kevin]’s building mate has a custom Playstation controller for his favorite game. Of course all the code is up on github for all your PSX controller emulation needs, but be sure to check out this completely unrelated Pop ‘N Music video from someone who desperately needs a piano.