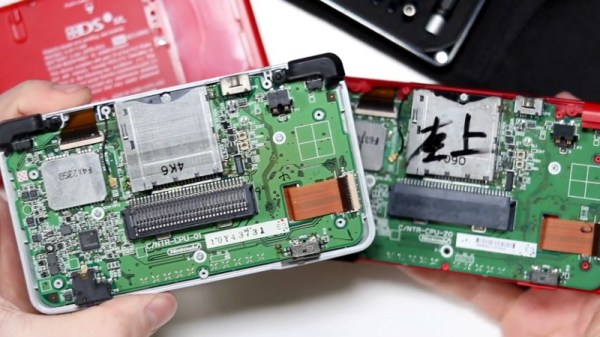 The Nintendo DS family encompasses a dizzying array of portable game systems released over a span of 17 years. The original DS received several refreshes and special editions, and when the next generation 3DS came along, it spawned a whole new collection of spin-offs. But even among all those machines there’s a name that even Mario himself would never have heard of: the Nintendo DS ML.

In a recent video, [The Retro Future] says he discovered this oddball system selling for around $25 USD on Chinese shopping site Taobao and bought one so he could get a closer look at it. Externally the system looks quite a bit like the refreshed DS Lite, but it’s notably larger and the screens look quite dated. That was already a strong hint to its true identity, as was the placement of its various buttons and controls.

But it wasn’t until [The Retro Future] cracked the system open that he could truly confirm what he had on his hands. This was an original Nintendo DS, potentially a new old stock unit that had never been distributed, which was transplanted into a custom enclosure designed to look like one of the later upgraded models. As for what this seller meant by calling this chimera the DS ML is anyone’s guess, though one of the commenters on the video thought “Maybe Legal” had a nice ring to it.

Now assuming these really are brand new systems that were simply installed in fresh cases, $25 is arguably a good deal. So long as you aren’t concerned with playing the latest titles, anyway. But at the same time its a reminder that you get what you pay for when dealing with shady overseas sellers. It’s just as likely, perhaps even more so, that these were used systems that got spruced up to make a quick buck.

Fake components are everywhere. In fact there’s an excellent chance most of the people reading this site have received some fake parts over the years, even if they didn’t realize it at the time. When there’s fly by night companies willing to refurbish a nearly 20 year old Nintendo handheld for $25, what are the chances that Bosch actually made that $2 temperature sensor you just ordered on eBay?

END_OF_DOCUMENT_TOKEN_TO_BE_REPLACED Okay, first of all: holy crap! Even if you didn’t know this started as a rusty table saw, the workstation that came out of this project is just phenomenal. It really makes us wish we had looked around for a used model with a cast iron top instead of going for the cheap stamped metal one that was ready to use.

[Simon Leblanc] started with a Delta contractor’s saw that was rusty inside and out. The refurbishment began by removing the table and everything from the inside. The rods and gears were all cleaned up before he began to sand away the rust on the table itself. But obviously he didn’t stop with getting the saw to be functional again. He built a small set of cabinets to serve as the base for the saw. They went inside of this larger assembly that combines an MDF table top with an Accusquare rip fence to greatly increase the working surface of the tool.

Now he needs to start in on an extra fancy CNC jig for the thing. [Julian] picked up an old record player that was sitting in somebody’s trash pile, and brought it home to see if it could be restored to working order. When he got it home he discovered that it didn’t work at all, so he and his wife decided to modernize it a bit.

In an effort to simultaneously reunite himself with his music collection and piss off audiophiles/antique collectors in the process, he gutted the radio and began rebuilding it to serve as an MP3 jukebox. Once the innards were removed, his wife refinished the cabinet and gave the front grill a new cloth cover.

An old PC was installed inside the cabinet, along with a set of relatively cheap (but better than paper cone) speakers. A pair of custom cut plexi panels were used to cover the computer, while providing space for the monitor and Apple wireless keyboard + trackpad [Julian] uses to manage the jukebox.

The refurbed record player came out looking quite nice, and although it likely raises the ire of several different groups of purists, we think it’s pretty cool.

A fundamental problem with flash memory has just gone mainstream. A detective successfully recovered data from a refurbished iPhone purchased from Apple. Flash memory controllers write to blocks randomly so using standard secure erase techniques are no guarantee that all of the storage space will be written.

[Rich Mogull] has posted a method that should wipe out almost all remnants of your personal data. You start by restoring the iPhone in iTunes and turning off all the syncing options. Next you create 3 playlists large enough to consume all of the phone’s storage space. Sync each playlist in turn and your residual personal data should be obliterated. All that’s left to do is sit back and wonder when the first article about the MacBook Air SSD being impossible to securely erase will be published…