If you’re an Android fan, there’s a good chance you’ve heard of the Nexus 5X. The last entry in Google’s line of low-cost Nexus development phones should have closed the program on a high note, or at the very least maintained the same standards of quality and reliability as its predecessor. But unfortunately, a well known design flaw in the Nexus 5X means that the hardware is essentially a time-bomb. There are far too many reports of these phones entering into an endless bootloop right around the one year mark to say it’s just a coincidence. 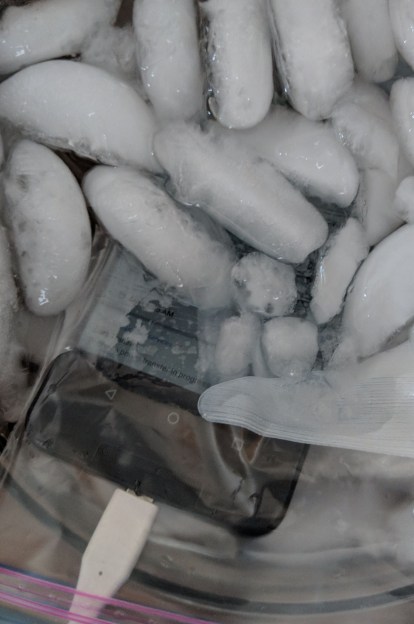 The general consensus seems to be that faulty BGA chip soldering on the CPU works lose after about a year or so of thermal stress. Whatever the reason, [hillbillysam] recently found himself the proud owner of a dead Nexus 5X. Resigned to the fact that he would need to get a new phone, he at least wanted to get some of his data off the device before it went to that big landfill in the sky.

As it turns out these bootlooped phones can temporarily be revived by cooling them down, say by putting them in the freezer for a few hours. There’s plenty of debate as to why this works, but even our own [Lewin Day] can testify that it does seem to get the phone booting again; though only until it comes back up to operating temperature. With this in mind, [hillbillysam] reasoned that if he kept the phone as cold as possible while it was running, it may stay operational long enough for him to pull his files off of it over USB.

He couldn’t exactly freeze the phone in a block of ice, but remembering his high school chemistry, he came up with something pretty close. By adding salt to water, you can significantly lower temperature at which it freezes. Putting the phone into a watertight bag and submerging it in this supercooled solution is an easy and non-destructive way of keeping it very cold while still being accessible over USB.

His Nexus 5X was able to keep kicking the whole time it was luxuriating in its below-freezing saltwater bath, giving him plenty of time to copy everything he needed. It doesn’t sound like the kind of spa day we’d like to have personally, but to each their own.

If your Nexus 5X has met a similar fate, you may want to take a look at our previous coverage about the issue. While your mileage may vary, we’ve reported on a couple of success stories so it’s worth a shot.

A core part of the hacker mentality is the desire to test limits: trying out ideas to see if something interesting, informative, and/or entertaining comes out of it. Some employees of Andrews & Arnold (a UK network provider) applied this mentality towards connecting their ADSL test equipment to some unlikely materials. The verdict of experiment: yes, ADSL works over wet string.

ADSL itself is something of an ingenious hack, carrying data over decades-old telephone wires designed only for voice. ADSL accomplished this in part through robust error correction measures keeping the bytes flowing through lines that were not originally designed for ADSL frequencies. The flow of bytes may slow over bad lines, but they will keep moving.

How bad? In this case, a pair of strings dampened with salty water. But there are limits: the same type of string dampened with just plain water was not enough to carry ADSL.

The pictures of the test setup also spoke volumes. They ran the wet string across a space that looked much like every hacker workspace, salt water dripping on the industrial carpet. Experimenting and learning right where you are, using what you have on hand, are hallmarks of hacker resourcefulness. Fancy laboratory not required.

Thanks to [chris] and [Spencer] for the tips.

The Peachy Printer, originally a crowdfunding campaign for a $100 stereolithography 3D printer, is now dead in the water.[Rylan Grayston], the creator of the Peachy Printer, announced that [David Boe] — investor, 50% owner of Peachy Printer, and business partner — had stolen over $300,000 in Kickstarter campaign funds. According to [Rylan], this money was used to build a house.

When the Peachy Printer was announced on Kickstarter, it was, by any measure, a game changing product. Unlike other stereolithographic printers like the Form 1 and DLP projector kit printers, the Peachy was cheap. It was also absurdly clever. Instead of using a stepper motor to raise a print out of a vat of resin, the Peachy Printer floated the resin on a vat of salt water. By slowly dripping salt water into this vat, the level of the resin rose up, allowing the galvanometers and laser diode to print the next layer of a 3D object. In our first coverage of the Peachy Printer, everyone was agog at how simple this printer was. It wasn’t a high-resolution printer, but it was a 3D resin printer that only cost $100. Even today, nearly three years after the launch of the Kickstarter campaign, there’s nothing like it on the market.

In the update published to the Kickstarter campaign, the reason for the failure of Peachy Printer to deliver becomes apparent. The Kickstarter campaign was set up to deliver the funds received – $587,435.73 – directly into [David Boe]’s account. Thirty days after the funds were received, [David] had spent over $165,000. In just over three months, all the Kickstarter funds, save for $200,000 transferred into the Peachy Printer corporate account, were spent by [David].