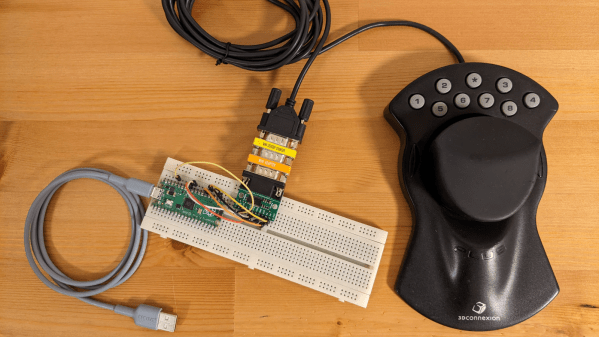 [Jacek Fedorynski] had an old Magellan/SpaceMouse 3D mouse with a serial interface which made it impossible for him to use with modern hardware and software. The problem he faced was two pronged – the absence of serial interfaces in the hardware and the lack of appropriate drivers for the operating system. So he built a low cost, simple adapter to use his RS-232 Magellan/SpaceMouse with modern software.

The hardware required to build the adapter was minimal. A Raspberry Pi Pico, a MAX3238 based RS-232 adapter, a null modem adapter and a DB9 gender changer. Of course, a combination null modem – gender changer would have made things even simpler. Four of the GPIO pins from the Pico are mapped to the serial RX, TX, RTS and CTS pins.

Flashing the code to the Pico is also straightforward using the BOOTSEL mode. Hold down the BOOTSEL button when plugging in the Pico and it appears as a drive onto which you can drag a new UF2 file. Just drag-n-drop [Jacek]’s magellan.uf2 firmware and you’re done.

If you’d rather build your own, modern 3D mouse, check out the DIY Cad Mouse You Can Actually Build. 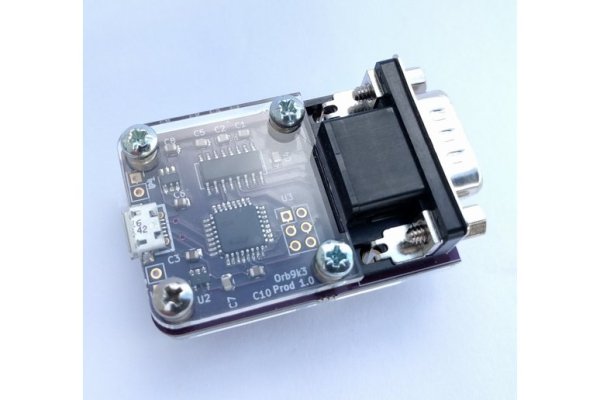 As much as we’d love a TV show version of the cult classic movie, we’re talking about a different kind of Spaceball. While there have been many iterations, [Evan] had a Spaceball built by a company known as Spacetec in 1991 and rebranded by HP. Being an older peripheral, he used the Orbotron 9001, a converter from RS232 serial to USB, to interface his Spaceball with modern devices.

The spaceball was one of the first 6 degrees of freedom controllers, useful for CAD and some games that supported it. It’s famous for being involved in the NASA Mars Pathfinder mission as it was used to control the Sojourner rover. In addition to the perfect orb, it also features eight handy buttons.

The Orbotron is a USB-capable microcontroller (Atmel SAMD21) designed to support the Spaceball 360, 4000, and 5000 series. Ultimately, after tinkering with the code to support the 2003 and 3003 Spaceballs, he had some reasonably usable with some rough edges. For example, acceleration curves still need tweaking, and going too fast can get you stuck. The downside was the rubber coating on the ball that had degraded over the years, making it horrendously sticky.

All the code changes are on GitHub. We’d love to see more spacemice integrated into things, like this ergonomic keyboard. Or even an open-source version of a spacemouse. After the break, we have a video of [Adafruit] showing a Spaceball 2003 working with a serial adapter.

END_OF_DOCUMENT_TOKEN_TO_BE_REPLACED 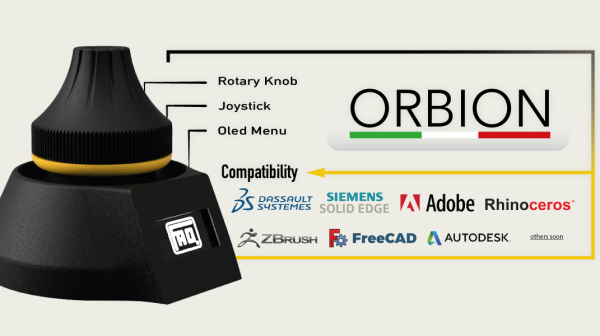 When you spend a lot of time on the computer doing certain more specialised tasks (no, we’re not talking about browsing cat memes on twitter) you start to think that your basic trackpad or mouse is, let’s say, lacking a certain something. We think that something may be called ‘usability’ or maybe ease-of-use? Any which way, lots of heavy CAD users gush over their favourite mouse stand-ins, and one particularly interesting class of input devices is the Space Mouse, which is essentially patented up-to-the-hilt and available only from 3DConnexion. But what about open source alternatives you can build yourselves? Enter stage left, the Orbion created by [FaqT0tum.] This simple little build combines an analog joystick with a rotary knob, with a rear button and OLED display on the front completing the user interface.

The idea is pretty straightforward; you setup the firmware with the application you want to use it with, and it emits HID events to the connected PC, replacing the mouse or keyboard input. Since your machine will take input from multiple sources, it doesn’t replace your mouse, it augments it. It may not be very accurate for detailed PCB layout work, but for moving around in a 3D view, or dialling in a video edit, this could be a very useful addition to your workstation, so why not give it a try? The wiring is simple, the parts easily found and cheap, and it’s only a few printed parts! This scribe is already printing the plastics right now, if you listen carefully you might be able to make out the sound of the Lulzbot in background.

There are many other takes on this idea, with varying levels of complexity, like this incredible build from [Ahmsville] that sadly doesn’t make the PCBs available openly, and here’s one we covered earlier mashing the expensive 3DConnexion spacemouse into a keeb.