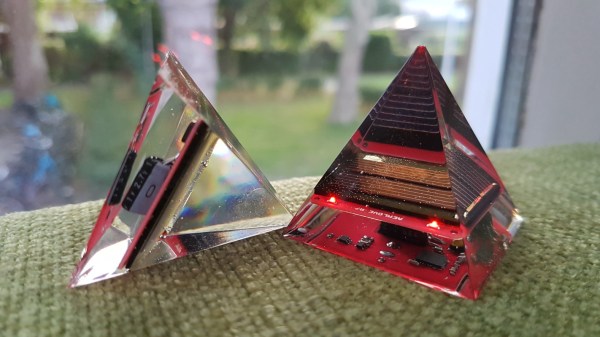 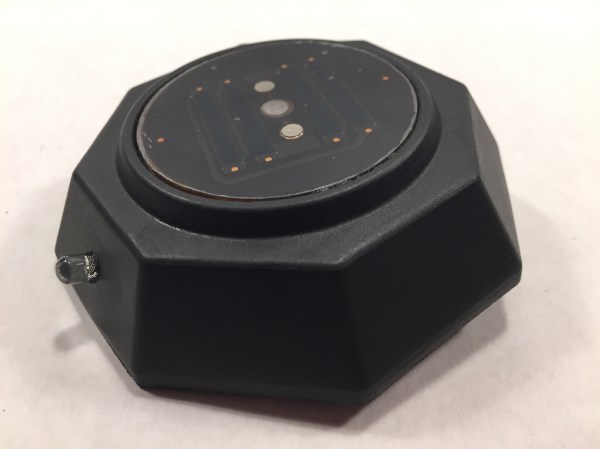 The basic throwie is a a type of street art/graffiti/vandalism — depending on where you stand — consisting of a coin cell, an led, and a magnet taped together. Seeking to be a slightly more eco-friendly troublemaker, [Alaric Loftus] has kindly put together an Instructable on how to build a solar-powered throwie!

In order to be the best maker of mischief possible, [Alaric Loftus] tried a number of different products to find one that was hackable,  supplied the right voltage, had the right form factor, and cheap enough to literally throw away. Turns out, garden path lights hit that sweet spot. Once [Alaric Loftus] has drilled a hole in the light and opened it up, de-soldering the stock LED, attaching some leads to the contacts and sticking it into the freshly-drilled hole is simply done. Hot-gluing a strong magnet on the bottom completes the throwie.

[Alaric Loftus] also advises that drilling the LED hole slightly smaller and sealing up any cracks with hot glue will strengthen its water resistance — because if it’s worth doing, it’s worth doing it right.

We’ve featured some really cool — even creepy — takes on the throwie concept, but please don’t contribute any further to e-waste buildup.

Because the world doesn’t have enough electronic junk floating around, [Victor] has improved the WiFi Throwie.

A decade ago, when strong, cheap magnets, bright LEDs, and small coin cell batteries were materials fresh to hacking, someone had a great idea: tape all these items up and throw them on bridges and overpasses. The LED throwie was born, and while we’re sure the biggest installation of LED throwies looked cool, it’s really just a small-scale environmental disaster.

Since then, the ESP8266 was created, and the world now has a tiny WiFi-enabled computer that’s the size of a postage stamp. Yes, WiFi throwies already exist, but coin cells don’t work with the ESP. This means the compact and tiny ESPs are laden down with heavy lithium cells. [Victor] had a better solution: tiny lithium batteries for quadcopters exist, so why not use those?

[Victor] ended up using a small 100mAh 3.7V Lipo battery from a tiny quadcopter for this build. 100mAh isn’t a lot, but in sleep mode, the ESP only uses about 15mAh, or about 6 hours of run time. Sending a picture takes 30 seconds at 120ma, or about 120mAh, so even with a tiny battery no bigger than the ESP itself, this diminutive web server can handle 100 connections before the battery dies.

While not recommended unless you intend to retrieve your throwable web server, it is an interesting example of the latest and cheapest technology that made a throwable webserver possible; 10 years ago, both the ESP and a battery this small would have been unthinkable.

A few years ago, someone figured out you can take an LED, a coin cell battery, and a magnet, tape them together, and throw them on every conceivable metallic surface. This was the creation of LED throwies, and the world was much worse off for its invention.

With the ESP-8266 WiFi module, we have a tiny, tiny device with a WiFi radio, and just enough processing power to do something interesting. What does that mean? WiFi throwies.

[Andreas Reischle] stuffed an ESP-8266 WiFi module and a lithium cell inside a weatherproof controller loaded up with magnets. On its own, these wouldn’t do much, but with the right combination of software, this little magnetic box can serve as an access point, serving up small JavaScript games to anyone who connects.

The software is based on the NodeMCU firmware and features a web server and a DNS server. The utility of a web server is obvious, and the DNS server redirects all traffic to the device’s index.html file, where a menu of small JavaScript games are presented.

It’s much better than polluting the world with LEDs and lithium; this one has Hunt the Wumpus on it.

Thanks [Oliver] for the tip.

END_OF_DOCUMENT_TOKEN_TO_BE_REPLACED Although the details of this build are quite scarce, not much is needed considering all that this cell phone/PS3 controller “mount” is made of is 3 binder clips and a few rubber bands. A very ingenious solution.

On the other end of the spectrum, I’ve spent way too much time overengineering the throwie (eventually it ended up using a ping-pong ball). Be sure to watch the first video at 0:32 for an impressive horizontal placement, or check out the baloon throwies at the end of the post for even more fun!

This robot may be appropriately engineered in function, but the form of this noodle-slicer has a distinctly Asian style. We think it may have been designed as a prop for a Godzilla movie originally.

3D glasses may have been all the rage in 2009, but it’s 2012 so you may want to get your hands on a pair of 2D glasses. These instructions will tell you how to make glasses to convert a 3D film into 2D if the third dimension annoys you or makes you dizzy. Thx [Brian] and [Victor]!

As seen in this post from the Bacteria forum, the test box originally featured at [HAD] has now been updated to include variable regulators, volt meters and an LED tester.  Check it out on it’s source, [Downing’s Basement]. Thx [Mike]!