While we don’t yet know the long-term effects of hanging out around 3D printers, it doesn’t take a in-depth study to figure out that their emissions aren’t healthy. What smells toxic usually is toxic. Still, it’s oh-so-fun to linger and watch prints grow into existence, even when we have hundreds or thousands of hours of printing under our belts.

Most of us would agree that ABS stinks worse than PLA, and that’s probably because it releases formaldehyde when melted. PLA could be viewed as slightly less harmful because it has a lower melting point, and more volatile organic compounds (VOCs) are released at higher temperatures. Though we should probably always open a window when printing, human nature is a strong force. We need something to save us from our stubbornness, and [Gary Peng] has the answer: a smart 3D printer emission monitor.

The monitor continually checks the air quality and collects data about VOC emissions. As the VOCs become elevated during printing, the user is notified with visual, audio, and phone notifications. Green means you’re good, yellow means open a window, red means GTFO. There’s a brief demo after the break that also shows the phone interface.

The heart of this monitor is a CCS811 gas sensor, which provides VOC data to a Particle Photon. [Gary] built a simple Blynk interface to handle the alerts and graph historical VOC readings. He’s got the code and STLs available, so let this be the last time you watch something print in blissful semi-ignorance.

Concerned about air quality in general? Here’s a standalone portable monitor designed to quantify the soul-crushing stuffiness of meetings.

END_OF_DOCUMENT_TOKEN_TO_BE_REPLACED

Over the years many people have made an air quality monitor station, usually of some configuration which measures particulates (PM2.5 & PM10). Some will also measure ozone (O3), but very few will meet the requirements that will allow one to calculate the Air Quality Index (AQI) as used by the EPA and other organizations. [Ryan Kinnett]’s project is one of those AQI-capable stations.

The AQI requires the measurement of the aforementioned PM2.5 (µg/m3), PM10 (µg/m3) and O3 (ppb), but also CO (ppm), SO2 (ppb) and NO2 (ppb), all of which has to be done with specific sensitivities and tolerances. This means getting sensitive enough sensors that are also calibrated. [Ryan] found a company called Spec Sensors who sell sensors which are pretty much perfect for this goal.

Using Spec Sensor’s Ultra-Low Power Sensor Modules (ULPSM) for ozone, nitrogen-dioxide, carbon monoxide and sulfur dioxide, a BME280 for air temperature, pressure and relative humidity, as well as a Plantower PMS5003 laser particle counter and an ADS1115 ADC, a package was created that fit nicely alongside an ESP8266-based NodeMCU board, making for a convenient way to read out these sensors. The total one-off BOM cost is about $250.

The resulting data can be read out and the AQI calculated from them, giving the desired results. Originally [Ryan] had planned to take this sensor package along for a ride around Los Angeles, to get more AQI data than the EPA currently provides, but with the time it takes for the sensors to stabilize and average readings (1 hour) it would take a very long time to get the readings across a large area.

Ideally many of such nodes should be installed in the area, but this would be fairly costly, which raises for [Ryan] the question of how one could take this to the level of the Air Quality Citizen Science project in the LA area. Please leave your thoughts and any tips in the comments.

END_OF_DOCUMENT_TOKEN_TO_BE_REPLACED

A wall-mounted, electric car charging station doesn’t sound like it’d require the most exciting or complicated enclosure. This was pretty much the assumption [Mastro Gippo] and his team started out with when they decided to turn what came back from a product designer into a real enclosure for the ‘Prism’ charging hardware they had developed. As it turned out, the enclosure proved to be the most challenging part of the project.

The first thought was to make a cheap, simple prototype enclosure for integration testing. This led them through trying out FDM 3D printed enclosures, wooden enclosures, folded (glued) plastic enclosures, aluminium extruded enclosures, Zamac alloy enclosures, and finally the plastic injection molded enclosure they had been avoiding due to the high costs.

Even if it meant taking out a loan to cover the setup costs, the results really do speak for themselves with a well-integrated design and two really happy looking partners-in-business. It does make us wonder how projects lacking this kind of financial leeway can get professional-grade enclosures without breaking the proverbial bank.

FDM 3D printing is always getting better and with a lot of post-processing you can have one enclosure that looks great, but that doesn’t scale. Outsourcing it to a professional 3D printing company like Shapeways is better, but it’s still not injection-molding quality and if the product is successful you’ll eventually invert the cost/benefit you were shooting for in the first place. Where is the middle ground on great-looking enclosures? Please let us know your experiences and thoughts in the comments.

Few people sacrifice themselves as completely as Dian Fossey did for the mountain gorillas of Africa. She fought tirelessly to protect them from poachers, cattle herders, zoo kidnappers, corrupt governments, and tourists. Dian left a comfortable life behind to make the misty slopes of an extinct volcano her home and headquarters. There, she patiently sought out the gorillas, mimicking their facial expressions and actions until they grew curious about her. Eventually, she had their complete trust and friendship, and considered them her family.

Dian spent eighteen years on and off living among the gorillas. She continually risked her health, life, and reputation to raise awareness of their plight and save them from extinction. While the mountain gorilla remains an endangered species, Dian’s research and conservation efforts have greatly contributed to their increased population in the years since her death.

END_OF_DOCUMENT_TOKEN_TO_BE_REPLACED

Join us on Wednesday, September 4th at noon Pacific for the Clean Water Technologies Hack Chat with Ryan Beltrán!

Access to clean water is something that’s all too easy to take for granted. When the tap is turned, delivering water that won’t sicken or kill you when you drink it, we generally stop worrying. But for millions around the world, getting clean water is a daily struggle, with disease and death often being the penalty for drinking from a compromised source. Thankfully, a wide range of water technologies is available to help secure access to clean water. Most are expensive, though, especially at the scale needed to supply even a small village. 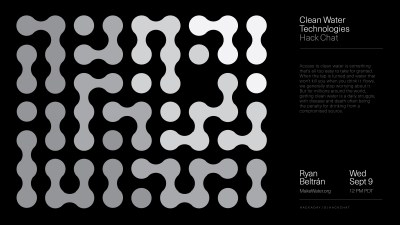 Seeing a need to think smaller, Ryan started MakeWater.org, a non-profit program that seeks to give anyone the power to make clean water through electrocoagulation, or the use of electric charge to precipitate contaminants from water. There’s more to MakeWater than electrocoagulation kits, though. By partnering with STEM students and their teachers, MakeWater seeks to crowdsource improvements to the technology, incorporating student design changes into the next version of the kit. They also hope to inspire students to develop the skills they need to tackle real-world problems and make a difference in the lives of millions.

Our Hack Chats are live community events in the Hackaday.io Hack Chat group messaging. This week we’ll be sitting down on Wednesday, September 4 at 12:00 PM Pacific time. If time zones have got you down, we have a handy time zone converter.