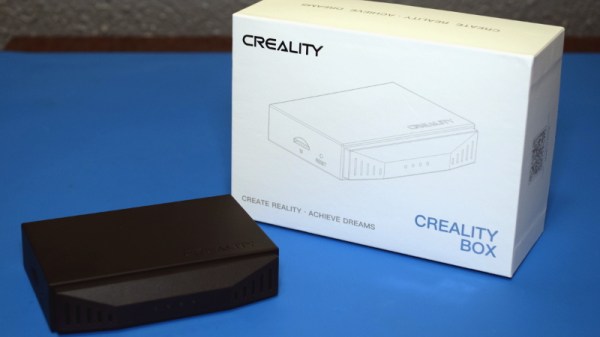 Creality, makers of the Ender series of 3D printers, have released a product called Wi-Fi Box meant to cheaply add network control to your printer. Naturally I had to order one so we could take a peek, but this is certainly not a product review. If you’re looking to control your 3D printer over the network, get yourself a Raspberry Pi and install Gina Häußge’s phenomenal OctoPrint on it. Despite what Creality might want you to believe, their product is little more than a poor imitation of this incredible open source project.

Even if you manage to get it working with your printer, which judging by early indications is a pretty big if, it won’t give you anywhere near the same experience. At best it’ll save you a few dollars compared to going the DIY route, but at the cost of missing out on the vibrant community of plugin developers that have helped establish OctoPrint as the defacto remote 3D printing solution.

That being said, the hardware itself seems pretty interesting. For just $20 USD you get a palm-sized Linux computer with WiFi, Ethernet, a micro SD slot, and a pair of USB ports; all wrapped up in a fairly rugged enclosure. There’s no video output, but that will hardly scare off the veteran penguin wrangler. Tucked in a corner and sipping down only a few watts, one can imagine plenty of tasks this little gadget would be well suited to. Perhaps it could act as a small MQTT broker for all your smart home devices, or a low-power remote weather station. The possibilities are nearly limitless, assuming we can get into the thing anyway.

So what’s inside the Creality Wi-Fi Box, and how hard will it be to bend it to our will? Let’s take one apart and find out.

END_OF_DOCUMENT_TOKEN_TO_BE_REPLACED

It’s always nice to get down to the root directory of a device, especially if the device in question is one that you own. It’s no huge surprise that a Google product allows access to the root directory but the OnHub requires locating the hidden “developer mode” switch which [Maximus64] has done. The Google engineers have been sneaky with this button, locating it at the bottom of a threaded screw hole. Has anyone seen this implemented on other hardware before?

There isn’t a blog post regarding this, however [Maximus64] shared a video on YouTube walking us through the steps to root and un-root Google’s OnHub, which is embedded after the break. He also states “wiki coming soon” in the description of the video, so we’ll keep eye on it for an update.

We covered the product announcement back in August and have heard a few reviews/opinions about the device but not enough to make an opinionated assumption. Rooting the device doesn’t seem to increase the OnHub’s number of LAN ports but we think it’s still worth the effort.

END_OF_DOCUMENT_TOKEN_TO_BE_REPLACED 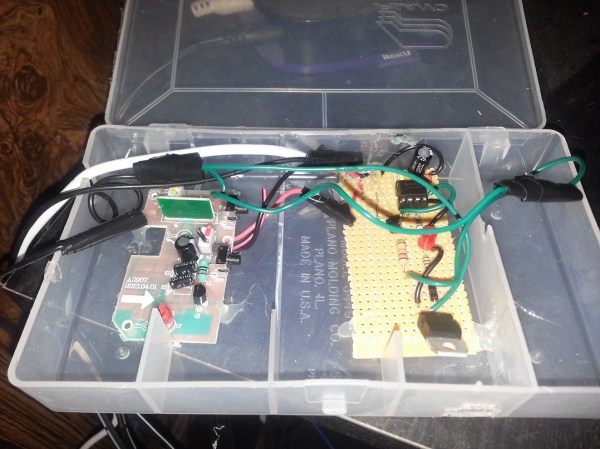 We’ve all have had to reset our routers or modems at some point because they were acting up. The typical scenario is; unplug the device, wait 30 seconds, plug it back in and wait for it to boot back up. While not hard, this can be an annoyance, especially if accessing the router or power cord is inconvenient. [Taylor] wrote in to tell us about his wireless router that seems to need to be reset more than he’d like. Although the simplest solution may be to get a new router, he thought it would be fun to do something a little more exciting by making a wireless reset controller.

[Taylor] started with an ordinary power strip. He spliced in a relay to the hot side of the AC line, connected to the common and normally-closed pins of the relay. That way, when the relay is not activated, the power strip is powered. Next, a wireless doorbell was re-purposed to act as the transmitter and receiver. The speaker was removed and the output lines connected to a mono-stable 555 timer circuit that [Taylor] made. When the circuit receives a signal from the door bell speaker lines, it will activate the relay for about 30 seconds. Since the relay was wired to supply voltage to the power strip when not activated, activating the relay cuts the power for 30 seconds effectively resetting the router. Now, whenever the router needs a reset, doing so is as easy as pushing the door bell button from anywhere in the house.

[Andy] needed a cheap Internet connection between a data-gathering Arduino and his home server. An Ethernet shield would suffice, but he couldn’t run CAT5 to the Arduino’s location. Wireless shields are hideously expensive, and after looking over the popular Zigbee modules, [Andy] had a few concerns about range and build complexity.

The obvious solution to this problem was getting a cheap WiFi router, flashing OpenWRT firmware on the device, and piping sensor data through the Arduino’s USB port, through the router, and over a WiFi connection to the server.

[Andy] used a TP-Link TL-WR703N wireless ‘travel router’ available on eBay £15 (~$30 USD when we checked). After flashing the router with OpenWRT, [Andy] had a wireless connection from a remote data-collecting Arduino directly to his server.

Attentive Hack a Day readers will note this is the third ‘wireless router + OpenWRT as a dev board’ build this week (first one, second one) . No, we don’t know what’s going on, or why the collective unconscious of makers around the globe decided to latch onto this type of build so suddenly. OpenWRT is available for hundreds of different routers, and anything that keeps disused routers out of the landfill (with the bonus of doing something useful) is alright in our book, so if you have another similar build, send it in and we’ll get around to it sometime.