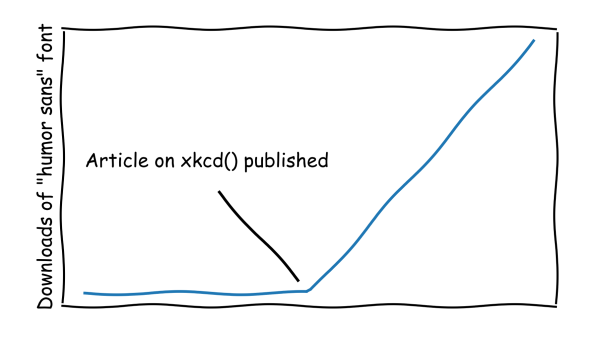 [Randall Munroe] certainly understands the power of graphical representation of data. The humorous plots in his xkcd webcomic are one of the favorite parts for many readers. Their distinctive, Tufteian style delivers the information – in this case, a punch line – without excessive decoration. To be honest, we can’t get enough of them. A recent reddit thread reminded us that you can generate a similar look for your own data (humorous or otherwise) in Python using Matplotlib.

If you already have a plot generated with Matplotlib, activating xkcd-mode is as simple as calling a method on the pyplot object:

The documentation recommends that you install the “Humor Sans” font for best effect. On one of our linux boxes, we were able to do this with a simple:

There will undoubtedly be similar incantations for other operating systems. It’s really that simple. In fact, the featured image above was generated with this minimal script:

Beyond generating humorous graphs for those with little artistic talent, these plots can also be used instead of hand-drawn sketches to indicate a simple model or expected result. The comic look of the plots conveys the idea that they don’t represent actual data, perhaps only a concept. We saw this done at one of the talks at the Hackaday SuperConference 2018.

We’ve also covered some of the xkcd comics before, such as when they subtly dissed Arduino back in 2010, before that was cool.

END_OF_DOCUMENT_TOKEN_TO_BE_REPLACED [Randall Munroe], the guy behind our favorite web comic xkcd, gave us yet another great project idea that falls on the heels of securing our valuables and silencing loud car stereos. The xkcd forum has been talking about how to implement this, and we’d like to hear what Hack A Day readers think about this idea.

The project isn’t much different from 3D photography. [Carl Pisaturo] has done a lot of art and experimentation based on this idea that basically amounted to largish binoculars. A poster on the xkcd forum has already built this using mirrors, but we’re wondering how much the parallax can be increased with this method. Two cameras and a smart phone would also allow automatic pan and tilt that corresponds to head movement.

We’re not quite sure if this idea can be applied to astronomy. The angular resolution of the human eye is around one arc minute, every star except for the Sun has an annual parallax less than one arc second. If anyone wants to try this out with a longer baseline (From Earth to Pluto for example), we would suggest simulating this in Stellarium. Seeing the moon as a sphere would be possible with a few hundred miles between cameras, though.

Tell us how you would build this in the comments, and be sure to send in your write-up if you manage to build it. We’ll put it up right away.

Thanks to [Theon144] for sending this in.

EDIT: Because the comments are actually bearing fruit, check out the thread on the Hack A Day forums for this post: link. After seeing the xkcd comic where they call the Kindle2 the hitchhiker’s guide, [Ladyada] couldn’t help but laser etch the Kindle 2 with “Don’t Panic”. We think it looks pretty good, if a bit bubbly. You can see the video of the entire process after the break. Now that xkcd has infiltrated our interwebs, hearts, and minds, maybe he can put just a tiny bit of effort into learning to draw. If you don’t have access to a laser etcher, you could always make your own. Just be careful you don’t accidentally go full out and cut your kindle to shreds.

END_OF_DOCUMENT_TOKEN_TO_BE_REPLACED

Who knew that a silly comic strip could be so influential? XKCD’s strip focusing on the inanity of YouTube comments inspired someone to actually add the Audio Preview feature to YouTube. It’s provided us with much amusement, especially where one commenter mentions that the “preview of my own post sounded moronic!”

Speech synthesis software is nothing new, of course. While it’s not the most sophisticated software, it’s an invaluable resource to those with disabilities, language learners, and others. This tutorial on Festival, a Linux-based text-to-speech software framework, would be a great place to start. You’re just moments away from finding out how stupid email, IM, and IRC sound read aloud.