Irongeek put together a simple program for monitoring network shenanigans when you’re on an untrusted network like the coffee shop. It sits in the Windows Systray and notifies you about a variety of events. It alerts you when it sees the MAC address of the IP gateway change. It watches the security log and warns you of any attempted or successful logins. The firewall log is also monitered. Try it out and send him any bug reports/feature requests you might have. This forum post from 2005 has us at a loss for words. Please educate your loved ones. Only you can prevent senseless hardware mutilation. Ben Heck has just wrapped up his latest project, a portable Atari 7800. He had meant to do this a long time ago, but lacking experience, the complex looking circuit board scared him off. It features a seven inch display, rechargeable batteries, combination driving and paddle controllers, plus AV out. The console was built by request and just like his other pojects: he’s not shy about showing you how it’s put together. Look for a making-of coming soon.

TippingPoint’s Zero Day Initiative reported a critical vulnerability affecting Firefox 3.0 yesterday. It includes the 2.0 versions as well. It’s unreleased and Mozilla is working on a fix already. Whatever the exploit is, it does require the user to visit a malicious site or click a link to executed. It came in 5 hours after the FF3 release, but since it affects previous versions, we wonder if the researcher was just sitting on it to be first. The Zero Day Initiative pays researchers for the exploits they submit.

Lifehacker has listed the top 10 apps that make installing AIR worth your time and effort. Among them are social networking widgets, RSS readers, and other utilities. As you may know, AIR is a set of cross-platform runtimes that allow developers to create rich internet apps that work on various different operating systems. The runtime environment is just as straightforward to install as any other ( JRE, for example).

Snackr and Twhirl, are both staples here at Hack a Day HQ for tracking news. We’ve also heard good things about Google Analytics Report Suite, which can be really useful for tracking site traffic. Still, we’re inclined to think that our audience could write software that’s at least as creative or useful. If you think you’re up to it, download the Adobe AIR SDK and get crackin’. In case you’ve ever wondered, “why don’t I ever run into those Hack a Day scamps at the Panera?” It’s because SonicWALL thinks we’re a “Hacking/Proxy Avoidance Systems” and the more inexplicable “Usenet News Groups.” We’ve gotten many reports from readers over the years about getting blocked by various vendors’ proxies. Do you have any trouble viewing Hack a Day from your school/work? What “service” are they using? We use ssh’s application level dynamic port forwarding to get around most systems when we’re on the road. 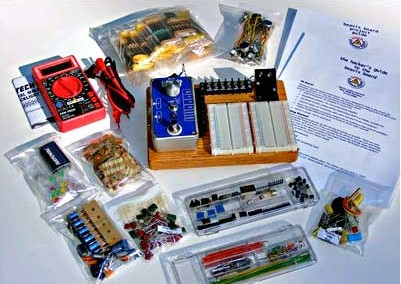 Beavis Audio has recently released the Beavis Board, a kit to help fledgling guitar pedal builders. The kit addresses four typical problems in this endeavor: learning to solder, dealing with breadboards, sourcing parts, and making sense of schematics. By including a breadboard/psu/switch combo and tons of other parts as well as informative and easy to read schematics, all of these problems are alleviated, allowing eager builders to get to work right out of the box.

The kit costs $249 and we’re guessing it’s a little too “entry level” for most of you. It has a highly informative manual in PDF format. You could use that to get ideas and then source your own parts. Have any of you built a guitar pedal specifically for prototyping?