One of our tipsters just sent us in an amazing story about repairing a plane in Antarctica — and flying it home!

On December 20, 2012 a Basler BT-67 Turbo 67 (DC-3T) — named Lidia — went down in Antarctica. Thankfully out of its 15 passengers there were no fatalities. For full details on the crash you can check out the accident description on the Aviation Safety Network.

Lidia was built back in the 1940’s, with its wings apparently put together by Rosie the Riveter herself in 1943. Its virgin flight was in 1944. Today, it is operate(d) as a tour plane, and before the accident it was conducting a tour of the Holtanna Glacier in Antarctica.

The plane sat in the snow for almost a year, before a team came back to repair it and bring it home. The expedition lasted two months, and they brought with them two new engines, a new cockpit, landing gear, and fuselage repair supplies. They’ve shared an incredible slideshow of photos that are available on Facebook, or you can stick around after the break to watch a video slideshow of the process.

Can you even begin to imagine repairing a car in Antarctica conditions — let alone a freaking airplane?

END_OF_DOCUMENT_TOKEN_TO_BE_REPLACED A few days ago, the folks at Nullspace Labs in downtown LA got a surprising memo: their building is going to be gutted in a month. With thirty days left, they need money to cover first and last months rent, and help with moving. We can imagine that moving a Hackerspace is no small feat, since they tend to accumulate tons of awesome stuff.

The Hackerspace has started a crowd funding campaign, and has posted a call for help. They are looking for money, new members, or help with moving. If you’ve never been, you can check out our tour of Nullspace Labs.

It’s tough deciding what Hackerspace news to cover. We can’t run individual features on every tip we get promoting Hackerspace events, developments, crowd funding campaigns, and calls for help. We’re featuring this one because we just visited them, they’re awesome, and they’ve also been the source for many great stories over the years, like craning in a laser cutter or developing a modular LED orb. So here’s a question for you: Should we be presenting more Hackerspace news that is perhaps only relevant at the local level? If you think we should, how would we present it? There’s the option of doing occasional links-post-like roundups. But if you have a better idea we’re all ears. 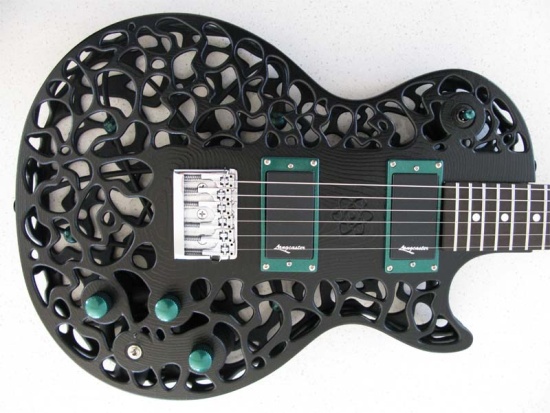 We’re not sure how we missed this one, but it definitely deserves a look. Professor of Mechtronics [Olaf Diegel’s] 3D printer must go to 12, because he’s printed these incredible electric guitar bodies. You probably won’t be making your own on your filament printer, however, because [Diegel] uses SLS (Selective Laser Sintering) to create the body out of nylon, then he dyes the resulting piece in a two-step process. You can read more about the construction specifics on his website.

And, they’re more than just eye-candy: the guitars sound brilliantly metallic. There are more than enough pictures and videos to keep you occupied on the site, where you can sift through all eight designs to your heart’s content. You’ll want to keep reading for a couple of videos embedded after the break, which feature some demonstrations of the guitar and comparisons to traditional electric guitars, as well as a brief history of its construction and build process.

END_OF_DOCUMENT_TOKEN_TO_BE_REPLACED

There’s a number of devices out there that extend HDMI over IP. You connect a video source to the transmitter, a display to the receiver, and link the two with a CAT5/5e/6 cable. These cables are much cheaper than HDMI cables, and can run longer distances.

[Daniel] didn’t care about extending HDMI, instead he wanted a low cost HDMI input for his PC. Capture cards are a bit expensive, so he decided to reverse engineer an IP HDMI extender.

After connecting a DVD player and TV, he fired up Wireshark and started sniffing the packets. The device was using IP multicast on two ports. One of these ports had a high bitrate, and contained JPEG headers. It looked like the video stream was raw MJPEG data.

The next step was to write a listener that could sniff the packets and spit the data into a JPEG file. After dealing with some quirks, JPEG images could be saved from the remote device. Some more code was needed to have the computer initiate the streaming, and to extract audio from the second port.

In the end, video capture with the low cost device was possible. [Daniel] also provided a bonus teardown of the device in his writeup.

About a year and a half ago, We launched the Hackaday retro edition, a small off-shoot of the main edition that is written in pure HTML, with no Javascript or any other Web 2.0 cruft. It’s designed so you can load this edition on any computer, from an Apple Newton to a Commodore 64. And people have done just that.

After a long period of neglect, we’re re-launching the retro edition with a new feature: every hour or so, five random Hackaday pages, going all the way back to the very first post will show up on the retro site. Yes, this was a feature we originally planned for the retro site, but now Hackaday has awesome devs working behind the scenes. I mean, they can set up a cron job! It’s amazing!

As always, you’re more than welcome to load our retro site with any vintage hardware, take a picture, and send it in. Odds are, we’ll plaster it up in one of these semi-frequent retro roundup posts.

No retro roundup post would be complete without a few examples of people loading the retro edition on old hardware. You can check a few out after the break.

END_OF_DOCUMENT_TOKEN_TO_BE_REPLACED This one has been a long time coming. We’re finally seeing an update to [Jaromir’s] retro gaming platform based around and ATmega chip. The thing that was novel about it back in 2009, and continues to be to this day, is the use of VGA output (PAL) from an AVR chip rather than composite video like most offerings.

Good projects never die and recently he picked the hardware up again, spinning a mostly surface mount board and putting together a new website to feature his work. Above you can see a demo of Commander Keen 4 running on the hardware (video below). He’s also has a rather trippy Super Mario port and adapted [Albert Seward’s] PacMan source for the hardware.

The chip is being clocked at 32MHz with VGA clock running at 19.6608 MHz. This gives him sixteen colors with a resolution of 192×144. He concedes that you get better resolution out of composite video, but who needs resolution for retro gaming?

END_OF_DOCUMENT_TOKEN_TO_BE_REPLACED