What we really like is the trigger mechanism [Brian] made out of some carefully cut wood,  a steel corner brace and a few nuts and bolts. It’s a simple mechanism that provides leverage and an easy way to release the bungee cord.  END_OF_DOCUMENT_TOKEN_TO_BE_REPLACED 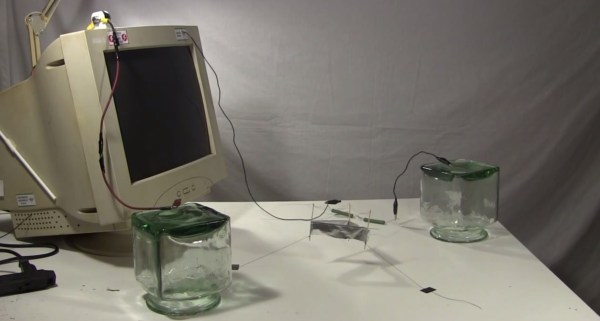 Finally somebody has found a good use for all those old CRT computer monitors finding their way to the landfills. [Steven Dufresne] from Rimstar.org steps us through a very simple conversion of a CRT computer monitor into a high-voltage power supply. Sure you can make a few small sparks but this conversion is also useful for many science projects. [Steve] uses the monitor power supply to demonstrate powering an ionocraft in his video, a classic science experiment using high voltage.

The conversion is just as simple as you would think. You need to safely discharge the TV tube, cut the cup off the high voltage anode cable and reroute it to a mounting bracket outside the monitor. The system needs to be earth grounded so [Steve] connects up a couple of ground cables. One ground cable for the project and one for a safety discharge rod. It’s really that simple and once wired up to a science project you have 25kV volts at your disposal by simply turning on the monitor. You don’t want to produce a lot of large sparks with this conversion because it will destroy the parts inside the monitor. The 240K Ohm 2 watt resistor [Steve] added will help keep those discharges to a minimum and protect the monitor from being destroyed.

Yes this is dangerous but when you’re working with high-voltage science experiments danger is something you deal with correctly. This isn’t the safest way to get high-voltage but if you have to hack something together for a project this will get you there and [Steve] is quite cautious including warning people of the dangers and how to safely discharge your experiment and the power supply after every use. This isn’t the first high-voltage power supply that [Steve] has constructed; we featured his home-built 30kV power supply in the past, which is a more conventional way to build a HV power supply using a doubler or tripler circuit. Join us after the break to watch the video.

END_OF_DOCUMENT_TOKEN_TO_BE_REPLACED

Over on the Projects site, [Jaromir] has created a tiny device with an OLED display, three buttons, and a USB port for storing text files, be it for saving a shopping list, a cheat sheet, or the most unusable e-reader ever made.

The front of the device is simply a 96×32 pixel OLED and three buttons for ‘up’, ‘down’, and ‘open/close’. The reverse side is where the magic happens with a PIC24 microcontroller that sets up a file system on the chip, allowing [Jaromir] to write 64kB of data on what is actually a Flash drive with a pitiful capacity. Text files are viewable on the OLED, with the video below showing the front page of Wikipedia being displayed in a glorious 16×4 text mode.

It’s not a very useful device by any means, but for some reason it’s garnered a lot of skulls and followers over on Hackaday Projects. In response to that, [Jaromir] is working on version two with a new PCB and a design for a 3D printed case. Not bad for what [Jaromir] himself describes as worse than just about any phone or tablet.

END_OF_DOCUMENT_TOKEN_TO_BE_REPLACED 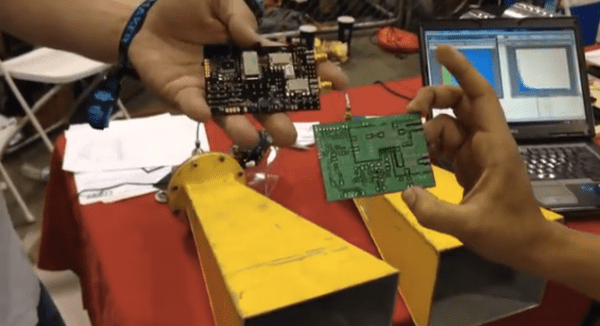 The very first fully operational radar Arduino shield was recently demonstrated at Bay area Maker Faire. It was built by [Daniel] and [David], both undergrads at UC Davis.

Many have talked about doing this, some have even prototyped pieces of it, but these undergrad college students pulled it off. This is the result from Prof. ‘Leo’ Liu’s full-semester senior design course based on the MIT Coffee Can radar short course, which has been going on for 2 years now. Next year this course will have 30 students, showing the world the interest and market-for project based learning.

Check out the high res ranging demo, where a wider band chirp was used to amazing results. Video below.
END_OF_DOCUMENT_TOKEN_TO_BE_REPLACED If the term ‘home made miter saw’ instantly instills frightening images of severed limbs into your head, you’re not alone. A quick internet search will yield some pretty hokey tool builds, we’ve even featured a few here on hackaday. This saw is different. [Pekka] made a pretty cool saw for cutting very accurate angles in wood.

This saw was purpose built with one goal in mind: cutting wood that will be glued together for use in segmented turning. Segmented turning is shaping a piece of wood stock that is composed of many different types of wood. This results in a very visually interesting product. Most of the saw is made from plywood. The hinge and supports for the arbor are beefy off-the-shelf pillow blocks. A 3-phase motor with speed control transmits power to the arbor via a belt. Belt tension is adjusted by sliding the motor further back along the motor mount base. [Pekka] took care so that the entire pivoting assembly was nearly balanced adding to the ease of use.Typical miter saws rotate the blade to achieve different angles of cuts. This design rotates the saw fence.

For safety there are a pair of polycarbonate blade guards and a micro switch on the handle that won’t let the saw start unless it is depressed. The micro switch has a secondary function also, when let go it applies an electronic brake to the motor so that the spinning blade does not touch the work piece when lifting the blade back up.