Hot glue falls into the same category of duct tape and zip ties as a versatile material for fixing anything that needs to be stuck together. [Ed]’s Bosch glue gun served him well, but after a couple of years the temperature regulation stopped working. Rather than buying a new one, he decided to rip it apart.

With the old temperature regulation circuit cooked, [Ed] looked around for something better on eBay. He came across a cheap PID temperature controller, and the Frankengluegun was born.

Quality glue guns with accurate temperature control are quite pricey. This solution can be added on to a glue gun for less than $30, and the final product looks just as good. 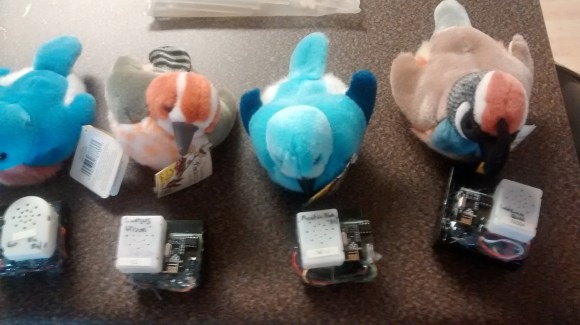 No, not real birds! [Kyle] works in operations at a web company and needed a way to send alerts to his fellow coworkers, so he modified a flock of Audubon Society plush birds to respond to a Bluetooth beacon.

Using NRF24L01+ Bluetooth Low Energy modules, [Kyle] installed one each in these battery-powered singing birds. The devices are presumably powered off of the battery that comes with the birds, but the use of the BTLE module means the batteries won’t discharge as rapidly.

[Kyle] also built an API that works over HTTP or IRC, which means that the employees in the office can activate everyone else’s birds over a simple and intuitive interface. The birds can be activated one at a time, or all together in “panic” mode as one giant flock (in case of an emergency in the office). They can also be activated one at a time on a specific hour to simulate the Audubon Society’s bird call clock.

He calls the device equail and it’s a very unique notification system with a lot of applications. All of [Kyle]’s code and documentation of his project are available on his github site. He also used this primer on BTLE to get started, and this guide on sending data over BTLE to help get the project in the air.

We preempt this week’s Hacklet to bring you an important announcement.

Hackaday.io got some major upgrades this week. Have you checked out The Feed lately? The Feed has been tweaked, tuned, and optimized, to show you activity on your projects, and from the hackers and projects you follow.

We’ve also rolled out Lists! Lists give you quick links to some of .io’s most exciting projects. The lists are curated by Hackaday staff. We’re just getting started on this feature, so there are only a few categories so far. Expect to see more in the coming days.

Have a suggestion for a list category? Want to see a new feature?  Let us know!

Now back to your regularly scheduled Hacklet

There are plenty of cameras on Hackaday.io, from complex machine vision systems to pinhole cameras. We’re concentrating on the cameras whose primary mission is to create an image. It might be for art, for social documentation, or just a snapshot with friends. [theschlem] starts us off with Pinstax, a 3D Printed Instant Pinhole Camera. [theschlem] is using a commercial instant film camera back (the back for a cheap Diana F+) and 3D printing his own pinhole and shutter. He’s run into some trouble as Fuji’s instant film is fast, like ISO 800 fast. 3 stops of neutral density have come to the rescue in the form of an ND8 filter. Pinstax’s pinhole is currently 0.30mm in diameter. That translates to just about f/167. Nice! Next up is [Jimmy C Alzen] and his Large Format Camera. Like many large format professional cameras, [Jimmy’s] camera is designed around a mechanically scanned linear sensor. In this case, a TAOS TSL1412S. An Arduino Due runs the show, converting the analog output from the sensor to digital values, stepping the motor, and displaying images in progress on an LCD. Similar to other mechanically scanned cameras, this is no speed demon. Images in full sunlight take 2 minutes. Low light images can take up to an hour to acquire. [Jason’s] Democracycam aims to use open source hardware to document protests – even if the camera is confiscated. A Raspberry Pi, Pi Cam module, and a 2.8″ LCD touchscreen make up the brunt of the hardware of the camera. Snapping an image saves it to the SD card, and uses forban to upload the images to any local peers. The code is in python, and easy to work with. [Jason] hopes to add a “panic mode” which causes the camera to constantly take and upload images – just in case the owner can’t. The venerable Raspberry Pi also helps out in [Kimondo’s] Digital Holga 120d. [Kimondo’s] fit a Raspberry Pi model A, and a Pi camera, into a Holga 120D case. He used the Slice of pi prototype board to add a GPIO for the shutter release button, a 4 position mode switch, and an optocoupler for a remote release. [Kimondo] even added a filter ring so he can replicate all those instagram-terrific filters in hardware. All he needs is to add a LiPo battery cell or two, a voltage regulator, and a micro USB socket for a fully portable solution. Finally, we have [LeoM’s] OpenReflex rework. OpenReflex is an open source 3D printed Single Lens Reflex (SLR) 35mm film camera. Ok, not every part is 3D printed. You still need a lens, a ground glass screen, and some other assorted parts. OpenReflex avoids the use of a pentaprism by utilizing a top screen, similar to many classic twin lens reflex cameras. OpenReflex is pretty good now, but [Leo] is working to make it easier to build and use. We may just have to break out those rolls of Kodachrome we’ve been saving for a sunny day.

That’s it for this week’s Hacklet! Until next week keep that film rolling and those solid state image sensors acquiring. We’ll keep bringing you the best of Hackaday.io! Still not too sure how to house your awesome Raspberry Pi B model? Don’t worry, [Timothy Giles] has got you covered! He’s just finished this very sleek open source PIvena case for anyone to use.

Why is it called the PIvena? He’s basing it off of [Bunnie’s] Novena project which is a hobby-based open source laptop! For more information you can checkout the recent interview we had with [Bunnie] himself!

Anyway, back to the hack — it features a laser cut case which has plenty of room for the Pi and any additional hardware you want to add. Like the Novena, the screen also functions as a lid, opening up to reveal the electronics, allowing for easy tinkering. All the files can be acquired over at Thingiverse, and he has assembly instructions available on Instructables. END_OF_DOCUMENT_TOKEN_TO_BE_REPLACED 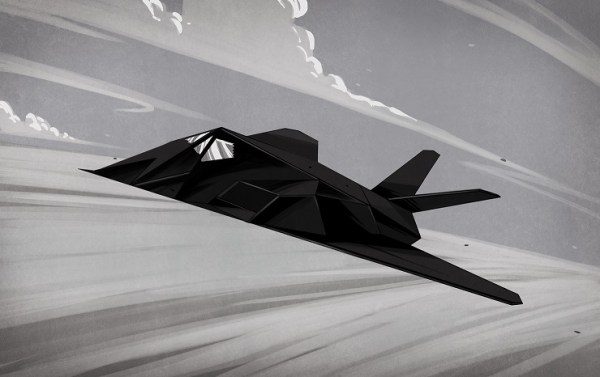 END_OF_DOCUMENT_TOKEN_TO_BE_REPLACED

It’s time once again for our weekly installment of people complaining about our community voting system for The Hackaday Prize! The theme this week – as it was last week – is ‘too cool for Kickstarter’. We’re looking for projects that are so awesome they would never see any mainstream appeal. If you’re still wondering what we mean by that, if this amazing project doesn’t make the top ten in this round of voting, I’ll be terribly disappointed.

Just like last week, we’re trying to give away a goodie bag of programmers, dev boards, and essential bench tools (prize list here) to someone on hackaday.io who has voted for a project that is too cool for Kickstarter.

This week one of you got lucky. Because [Eric] is such a good sport and was kind enough to click a few buttons during this round of community voting, we’re sending him a boat load of dev boards, all the programmers he’ll ever need, a meter that will last him for the rest of his life, and a pretty good power supply. Awesome. Now go congratulate him.

There’s only five days left until the cutoff, so get your project into The Hackaday Prize. At this stage the requirements are extremely minimal, and you can knock everything out in a few hours.