END_OF_DOCUMENT_TOKEN_TO_BE_REPLACED

Any guitarist knows what a tangled mess of cords can come out of a long jam session. One possible solution would be to get a wireless guitar system, however, such a setup can range in price from about 50 to several hundred dollars. That’s a big price to pay for not having to untangle some guitar cords.

[mattthegamer463] wanted a wireless setup but didn’t want to spend the cash on one. He’s a tinkerer and had a spare wireless microphone setup hanging around. So, he decided to try converting the wireless mic to work with his guitar.

Both microphones and guitar pickups work in similar manner. In a guitar pickup, the vibrating guitar string disturbs a magnetic field and induces a current in the pickup’s coil. That current is the guitar’s signal. Microphones are similar, air pressure waves vibrate a diaphragm or ribbon which then disturbs a magnetic field to create the signal. [mattthegamer463]  thought these principles were close enough for him to make quick work of the conversion.

First, the microphone was taken apart and the diaphragm module was removed, cutting the two wires that ran into the mic’s handle. A hole was then drilled into the wind screen so a 1/4″ jack could be installed. [mattthegamer463] states that it’s important to electrically isolate the jack from the wind screen or the signal and ground wires will short and the project won’t work. The two wires that were previously connected to the diaphragm module are then soldered to the newly added jack and the mic was screwed back together.

To use it, a patch cord is run from the guitar into the jack on the mic. The stock wireless receiver from the mic system is then plugged into the guitar amp. The modified ‘mic’ now transmits the guitar signals to the guitar amp! You may think it would be awkward to hold that mic while jamming. You’d be right if [mattthegamer463] didn’t come up with a nice looking aluminum and rubber belt clip.

This is a project that is about a year and a half in the making, but [Fran] is finally digging into the most iconic part of the Apollo Guidance Computer and building the most accurate reproduction DSKY ever.

There are a few modern DSKY replicas, but all of them are exceedingly anachronistic; all of these reproductions use seven-segment LEDs, something that didn’t exist in the 1960s. A true reproduction DSKY would use custom electroluminescent displays. These EL segments are powered by AC, and transistors back then were terrible, leading to another design choice – those EL segments were turned on and off by relays. It’s all completely crazy, and aerospace equipment to boot.

Because of the custom design and engineering choices that seem insane to the modern eye, there isn’t much in the way of documentation when it comes to making a reproduction DSKY. This is where [Fran] tapped a few of the contacts her historical deconstruction cred earned when she reverse engineered a Saturn V Launch Vehicle Digital Computer to call upon anyone who would have access to a real Apollo-era DSKY.

The first contact was the Kansas Cosmosphere who was kind enough to send extremely detailed photographs of the DSKYs in their archives. It would have been extremely nice to have old documentation made when the DSKYs were rolling off the assembly line, but that information is locked away in a file cabinet owned by Raytheon.

[Fran] got a break when she was contacted by curators at the National Air and Space Museum’s Garber facility who invited her down to DC. She was given the grand tour, including the most elusive aircraft in the museum’s collection, the Ho 229, the dual-turbojet Nazi flying wing. At the Garber facility, [Fran] received permission to take apart two DSKYs.

The main focus of [Fran]’s expedition to the Air and Space Museum was to figure out how the EL displays were constructed. The EL displays that exist today are completely transparent when turned off because of the development of transparent conductors.

The EL displays in the DSKY were based on earlier night lights manufactured by Sylvania. After looking at a few interesting items that included Gemini hardware and early DSKYs, this sort of construction was confirmed.

With a lot of pictures, a lot of measurements, a lot of CAD work, and some extremely tedious work, [Fran] was able to create the definitive reference for DSKY display elements. There are 154 separate switchable element in the display, all controlled by relays. These elements are not multiplexed; every element can be turned on and off individually.

Figuring out how the elements were put together was only one part of [Fran]’s research. Another goal was to figure out the electrical connections between the display and the rest of the DSKY. There, [Fran] found 160 gold pins in a custom socket. It’s bizarre, and more like a PGA socket than like the backplane connector [Fran] found in the Saturn V computer.

Even though [Fran]’s research was mostly on the EL panel inside the display, she did get a few more insights with her time with the DSKYs. The buttons are fantastic, and the best keys she’d ever used. This is just part one of what will be an incredibly involved project, and we’re looking forward to what [Fran] looks into next.

A quick look at the pinouts of an Intel 8086 & 8088 processor reveals a 20 bit address bus. There was high demand for the ability to address 1 meg (2^20) of address space, and Intel delivered. However, a curious individual would wonder how they can achieve such a feat with only 16 bit registers. Intel solved this riddle by combining two registers so they could make it compatible with code written for the 8008, 8080 & 8085. The process they use can be a bit confusing when trying to figure out where to locate your code in the ROM. In this article, we are going to go over the basics of how the Physical Address is calculated and how to locate your code correctly in ROM.

END_OF_DOCUMENT_TOKEN_TO_BE_REPLACED

There’s a lot to learn from this 1966 Army training film about the International Morse Code, but the most crucial component of good keying is rhythm. A young man named [Owens] demonstrates very clean keying, and the instructor points out that skill is the product of sending uniform and short dits, uniform and short dahs, and correct spacing between dits, dahs, letters, and words.

Throughout the film, there are title cards in a typeface that shows the stroke order of military printing. The instructor points this out after a brief interlude about the phonetic alphabet (Alpha, Bravo, Charlie, &c). Right away, we see that the Morse Code for ‘H’ is four dits that gallop with the rhythm of a horse in a hurry to get to the hotel. 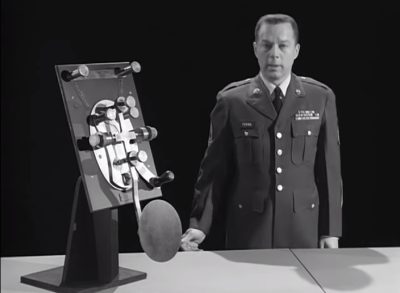 Such clever and memorable pictures are painted for a few other letters. We wish he would have covered them all, but that’s not the aim of this film. The Army is more concerned with good, clean rhythm and proper spacing that marks the difference between ‘low’ planes and ‘enemy’ planes. There’s a simple, three-step plan to getting what is called a ‘good fist’, and the Army demonstrates this in the best possible way: a giant J-38 and fake hand descending from the ceiling to match. Yes, really.

The first step is to adjust the key to ensure good contact alignment, proper gap spacing, and ideal spring tension. The second step is to develop good technique by resting one’s elbow on the table and holding the key rather than slapping it. The third step is simply to practice. Learning through imitation is helpful, as is taping one’s practice sessions and playing them back. [Owens] likes to use an RD-60 code recorder, which immortalizes his signals in ink.

END_OF_DOCUMENT_TOKEN_TO_BE_REPLACED

For one reason or another, we’ve been seeing a lot of builds featuring the Teensy 3.1 filtering in on the tip line recently. In retrospect, it’s somewhat obvious; it’s a good board that’s cheap and fast. Yes, somehow [Paul] hit all three in the good/cheap/fast mutually exclusive triumvirate.

Now, there’s a new Teensy. It’s the Teensy LC – Low Cost. It’s not as powerful as the Teensy 3.1, but it does give you the power of an ARM for something that’s just about as cheap as a board with an ATMega.

The chip [Paul] chose for the Teensy LC is the Freescale MKL26Z64 (datasheet here and 876-page reference manual here. PDFs of course). This is a 32-bit Cortex-M0+ running at 48 MHz with 64k of Flash and 8k of RAM. There are 27 digital I/O pins on this one, and the Teensy LC has been designed to be pin-compatible with the Teensy 3.0 and 3.1.

On board are 13 analog inputs, 8 PWM outputs, on 12-bit DAC output, three serial ports, two SPI ports, and two I2C ports. Most of the pins can drive 5mA with a few capable of driving 20mA, and there is a single 5v output pin for driving WS2812 Neopixel LEDs.

Since this is a cut-down version of the Teensy, everything available on the Teensy 3.1 just can’t fit into the BOM of the Teensy LC. The pins aren’t 5V tolerant, there’s no CAN bus, and there are only 4 DMA channels instead of 16 on the Teensy 3.1. Still, it’s a great ARM answer to the ATMega Trinket or other small dev boards.