Planning to make that carved a pumpkin last past Halloween night? Forget the tealight or LED candle—here’s an easy, no-solder project that will make it extra special. By default, this jack-o-lantern looks like it has a flickering flame, but get close enough to it and it goes crazy with color.

All you need is an LED matrix, a Rainbowduino to drive it, a PIR motion sensor to trigger the random colors, and a power source. [Alpha Charlie] kept the electronics from becoming pumpkin-flavored with some plastic bags. Since he used the PIR as the jack-o-lantern’s nose, there is a bit of plastic behind it to keep moisture from interfering.

[Alpha Charlie]’s build instructions are quite detailed, which makes this project even simpler if you’ve never used a PIR before. There are lots of ways you could build on this project to make it your own, like using trick-or-treater motion to trigger screams or spooky sounds, or add more sensors to make it more interactive. Watch it react after the break.

If you have nothing else at all to do between now and trick-or-treat time, you could bust out the soldering iron and recreate this 70-LED matrix jack-o-lantern. Blinkenlights too safe for your tastes? Fire-breather it is, then.

END_OF_DOCUMENT_TOKEN_TO_BE_REPLACED

[Donnie Plumly] likes to spice things up at the office around holidays. This Halloween he decided to make an office photo booth — with a bit of a twist. He calls it the Zombie Selfie.

He cast his arm in silicone to make a gruesome zombie hand, which he set up with a vibration sensor. If you touch the arm (he encourages you to slap it), an Arduino picks up the vibration which initiates the picture taking sequence!

He’s using an IR LED with the Arduino to trigger the camera, and then an Eye-Fi card in it automatically transfers it to a computer in a DropBox. An IFTTT script then publishes it to Twitter for all to see under the account @ZombieSelfie! There are some pretty amusing ones already!

And so you can preview your Zombie Selfie, he also threw a monitor up — there’s no going back after the picture is taken though! It’ll be posted straight to Twitter.

When it comes to custom photo booths though, its hard to top this robotic artist who will actually paint your picture for you!

This Halloween, crafting most of your props and replicas wont be as easy as hitting “print.” This Mass Effect M-6 Carnifex Rubber Band Gun is the exception, though, and it’s all thanks to the detailed efforts of [eggfooyoung]. Like many others in childhood, [eggfooyoung] dreamed of sporting his own rubber-band gun. Year’s later, he’s made that dream a reality, and one for many others as well. 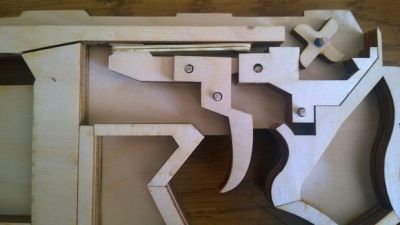 Mechanically, rubber-band guns, especially semi-automatic ones, are a finely tuned escapade into complex levers and joints. [eggfooyoung] took it upon himself to learn from the best in the craft, in this case, YouTube user [RBGuns] who has posted designes for numerous rubber band weapons. Overall, the M-6 Carnifex is a triumph of shared knowledge, as it’s an iteration of [RBGun’s] M9 build. [eggfooyoung’s] documentation is also everything we’d love to see in a weekend project: design files [PDF], detailed pictures documenting the step-by-step gluing process, and resources to dig more deeply into building your own rubber band guns.

Halloween is when the ghouls start haunting and the hackers start hacking. All hallows eve is the perfect holiday for eerie blinking LEDs, spooky audio oscillators, and wild animatronics. We had a double dose of Halloween hacks last year on the Hacklet. This year we’re bringing you even more of the best Halloween hacks on hackaday.io! 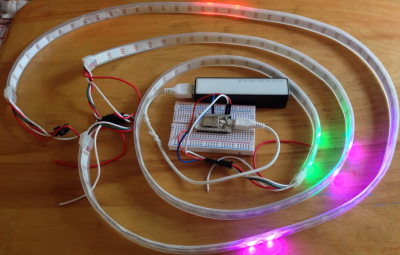 We start with [dougal] and Halloween Blinky Eyes. [Dougal] wanted to create the effect of creatures peeking at you from the dark corners of the room, and he’s certainly nailed it. A strip of WS2812 LEDs is the trick here. Pairs of LEDs light up, blink, and fade away like spooky eyes. The Strip is controlled by a Particle Core using Adafruit’s NeoPixel Library, though [Dougal] plans to move to the FastLed library. Everything is powered by a USB power pack. This hack isn’t much to look at with the lights on, so check out the video to see these eyes really shine! 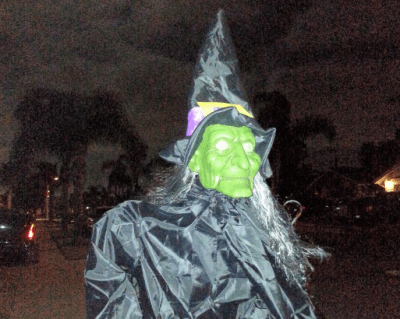 Next up is [controlmypad] with Blair the Witch Project. A normal trip to Home Depot turned paranormal when [controlmypad] spotted an awesome witch decoration. The free-standing mannequin had some basic animatronics and the all important manual trigger. [controlmypad] already had a discarded electric wheelchair. After replacing the chair batteries he modified it with a Sabertooth 2×32 Motor Controller and a standard radio control receiver. A spare channel was connected to Blair’s manual trigger. An aluminum tube joins the witch and the scooter. The hardest part of this hack was keeping Blair’s skirt out of the scooter wheels. Home Depot to the rescue! A simple hoop made of lawn edging plastic keeps the fabric and wheels apart. 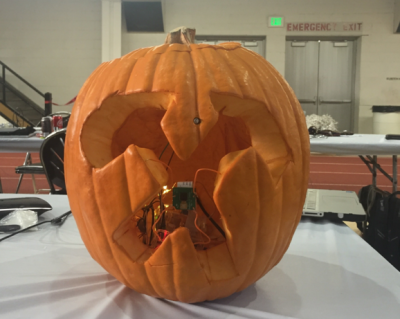 [Alex Cordonnier] and his team participated in Boilermake 2015, a 24 hour Hackathon at Purdue University. The fruit of their labor is Trick or Tweet, the tweeting Jack-o’-lantern. Yes folks, we now have the internet of gourds. Hiding inside Trick or Tweet is a Raspberry Pi and a Pi Camera. The pumpkin itself is also a giant capacitive touch switch. Touching the pumpkin triggers a count down after which Trick or Tweet snaps a photo. It then adds some spooky Halloween overlays, a pun or two, and throws the whole thing up on twitter @PumpkinPiPics. [Alex] hasn’t uploaded the code yet, but we’re guessing it consists of a few Python scripts. Pretty awesome for 24 hours of work! 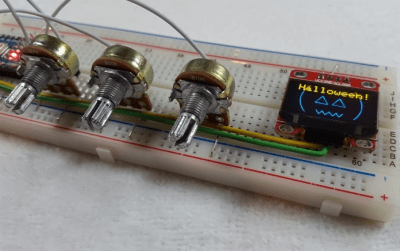 Sometimes Halloween hacks take on a life of their own. That’s exactly what happened when [Hari Wiguna] sat down with a few parts he ordered from China. Happy Halloween 2015 is the result. [Hari’s] order included some potentiometers, a two color OLED display, and some Arduino clones. In no time [Hari] had three pots wired up to the Arduino’s analog inputs. The OLED quickly followed, displaying graphics via the Arduino’s I2C bus. He really wanted a Jack-o’-lantern though. It took a bit more tweaking, but eventually [Hari] was successful. The first pot sets eye size.  The second controls eye rotation. The third pot changes the width of Jack’s mouth. [Hari] has all the code for this hack up on his most recent project log.

Not spooked enough? If you want to see more Halloween projects, check out our newly updated Halloween hacks list! Did I miss your project? Don’t be shy, just drop me a message on Hackaday.io. That’s it for this week’s Hacklet; As always, see you next week. Same hack time, same hack channel, bringing you the best of Hackaday.io! 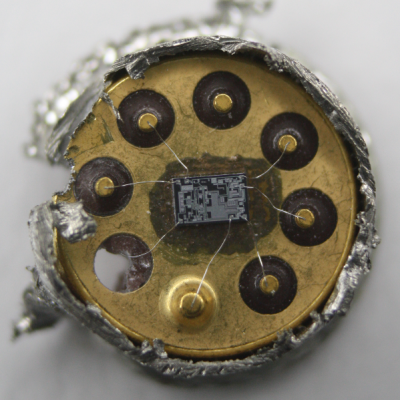 When you have a CNC mill sitting around, it almost seems anachronistic to pull out a kitchen knife to carve a pumpkin. You can hardly blame [Nathan Bentall] for choosing an endmill instead. If you’re feeling the same, check out his blog post where [Nathan] works through all the steps involved in going from a raw pumpkin to a 3D RGB LED bust of himself. To put his head on the pumpkin’s shoulders he captured a depth map using a Kinect and then got down to some unorthodox milling.