Linux programs, when they misbehave, produce core dumps. The reason they have that name is that magnetic core memory was the primary storage for computers back in the old days and many of us still refer to a computer’s main memory as “core.” If you ever wanted to have a computer with real core memory you can get a board that plugs into an Arduino and provides it with a 32-bit core storage. Of course, the Arduino can’t directly run programs out of the memory and as designer [Jussi Kilpeläinen] mentions, it is “hilariously impractical.” The board has been around a little while, but a recent video shined a spotlight on this retro design.

Impractical or not, there’s something charming about having real magnetic core memory on a modern CPU. The core plane isn’t as dense as the old commercial offerings that could fit 32 kilobits (not bytes) into only a cubic foot. We’ll leave the math about how much your 8-gigabyte laptop would have to grow to use core memory to you.

END_OF_DOCUMENT_TOKEN_TO_BE_REPLACED

If you are an enthusiast for 1950s computer hardware, you are probably out of luck when it comes to owning a machine of your own. Your best chance will be to join the staff of one of the various museums that preserve and operate these machines, at which you can indulge your passion to your heart’s content. But what if we told you that there is a 1950s computer available for pick-up at any time, to whoever is prepared to go and get it and has suitable transport? You’d be making plans straight away, wouldn’t you? The computer in question is real, but there’s a snag. It’s at the bottom of the Indian Ocean, just at the start of international waters off the coast of Kenya. The story of Kenya’s early computing and how the machine met its fate is the subject of a fascinating article from a year or two ago on owaahh.com that had us riveted from start to finish.

Like large state-owned enterprises worldwide, the Kenyan railway and power monopolies were among the first commercial customers for computing. In the final years of the British Empire, those were ordered from a company in London, International Computers & Tabulators, and it was their ICT1202 that served the railway company. The article goes into detail about the history of the company’s East African operation, the problems of running a tube-based computer in an African climate without air-conditioners, and the 1202’s demise and replacement. We’ll not spill the beans here on how the computer ended up on the seabed and how its replacement ended up being spirited away to China, for that you’ll have to read it all. It’s worth saying, the author also has a personal website in which he goes into much more detail about his experience with computers in the 1950s and ’60s.

Not had enough ancient computer tech? A couple of years ago we toured the primordial electronic computer, Colossus, and also took a look at the National Museum Of Computing that houses it.

[52 Skillz] didn’t know anything about building robots. So he decided to not just read about it or make a simple robot. He jumped right in and wanted to build a robot that could make a cake. It took about a year and a half but it now — mostly — works, as you can see in the video below.

Granted it isn’t perfect and it isn’t really all that practical. But as a learning exercise, it was certainly ambitious and successful. Apparently, you still have to scrape the bowl a little by hand to get some of the flour off the bowl walls. Also, loading the ingredients might be more work than just making it by hand, but that really isn’t the point.

END_OF_DOCUMENT_TOKEN_TO_BE_REPLACED

At one time, GoPro was valued at over eleven Billion dollars. It’s now on the verge of being a penny stock, because if surfers can make action cams and video editing software, anyone can. Action cams are everywhere, and one of the cheapest is the SQ11. It’s a rip-off of the Polaroid Cube, has a non-standard USB socket, a tiny battery, and the video isn’t that great. It only costs eight dollars, though, so [pixelk] decided to vastly expand the abilities of this cheap camera for a Hackaday Prize entry.

The major shortcoming of the SQ11 action cam is the tiny battery. Reportedly, it’s a 200 mAh battery, but the stated 1-2 hours of runtime bears no resemblance to reality. The solution to this problem, as with most things in life, is to throw some lithium cells at the problem.

[pixelk] disassembled the SQ11 action cam and 3D printed a much longer enclosure meant to fit a single 18650 battery. There’s a protection circuit, so that’s fine, but there’s still a problem: the charging circuit in the camera is tailored for a 200 mAh battery — charging an 18650 cell would probably take a day. That’s no problem, because this enclosure leaves the battery removable, for easy recharging in an external device.

Does this make the SQ11 a good camera? Marginally, yes. If you need to record video for hours and hours, you won’t be able to do better than an eight dollar camera and four dollars in parts.

It’s not every project write-up that opens with a sentence like “I had this TURBOVAC 50 turbomolecular pump laying around…”, but then again not every write-up comes from someone with a lab as stuffed full of goodies as that of [Niklas Fauth]. His pump had an expired controller board, so he’s created an open-source controller of his own centred upon an STM32. Intriguingly he mentions its potential use as “I want to do more stuff with sputtering and Ion implantation in the future“, as one does of course.

So given that probably not many Hackaday readers have a turbomolecular pump lying around but quite a few of you will find the subject interesting, what does this project do? Sadly it’s a little more mundane than the pump itself, since a turbomolecular pump is a highly specialised multi-stage turbine, this is a 3-phase motor controller with analogue speed feedback taken from the voltage across a couple of the motor phases. For this reason he makes the point that it’s a fork of his hoverboard motor controller software, the fruits of which we’ve shown you in the past. There isn’t a cut-out timer should the motor not reach full speed in a safe time, but he provides advice as to where to look in the code should that be necessary.

This is by no means the first turbomolecular pump to make it to these pages, in 2016 we brought you one taking inspiration from a Tesla turbine.

Remember when PCBs were green and square? That’s the easy default, but most will agree that when you’re going to show off your boards instead of hiding them in a case, it’s worth extra effort to make them beautiful. We’re in a renaissance of circuit board design and the amount of effort being poured into great looking boards is incredible. The good news is that this project proves you don’t have to go nuts to achieve great results. This stars, moons, and planets badge looks superb using just two technical tricks: exposed (plated) copper and non-rectangular board outline. 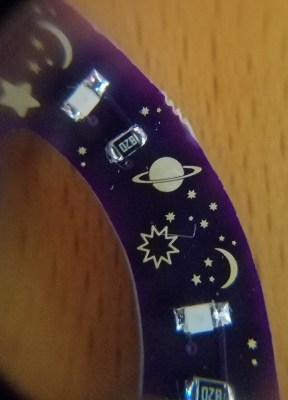 Don’t take that the wrong way, there’s still a lot of creativity that [Steve] over at Big Mess o’ Wires used to make it look this great. The key element here is that copper and solder mask placements have extremely fine pitch. After placing the LEDs and resistors there’s a lot of blank space which was filled with what you might see in the night sky through your telescope.  What caught our eye about this badge is the fidelity of the ringed planet.

The white ink of silk screen is often spotty and jagged at the edges. But this copper with ENIG (gold) plating is crisp through the curves and with razor-sharp tolerance. It’s shown here taken under 10x magnification and still holds up. This is a trick to keep under your belt — if you have ground pours it’s easy to spice up the look of your boards just by adding negative-space art in the solder mask!

[Steve] mentions the board outline is technically not a circle but “a many-sided polygon” due to quirks of Eagle. You could have fooled us! We do like how he carried the circle’s edges through the bulk of the board using silk screen. If you’re looking for tips on board outline and using multiple layers of art in Eagle, [Brian Benchoff] published a fabulous How to do PCB art in Eagle article. Of course, he’s gone deeper than what the board houses offer by grabbing his own pad printing equipment and adding color to white solder mask.

The art was the jumping off point for featuring this badge, but [Steve] is known for his technical dives and this one is no different. He’s done a great job of recounting everything that popped up while designing the circuit, from LED color choice to coin cell internal resistance and PWM to low-power AVR tricks.

We don’t know if [Marius Taciuc] was thinking about how all Jedi make their own lightsabers as a rite of passage, but he decided that it was time to build his own soldering iron. He used a Hakko T12 tip which has a built-in thermocouple. However, he found that the information on the Internet about the tips was either incomplete or incorrect. Naturally, he figured it out and you can see the completed iron in the video, below.

The problem stems from the thermocouple type. Some sites he found identified it as a type K device. Others said it wasn’t, but didn’t say what kind it was. He took a container of oil and heated it to various temperatures and then measured it with both a commercial soldering iron and the T12 tip. By plotting the data against known thermocouple curves, he concluded the device was actually type C.