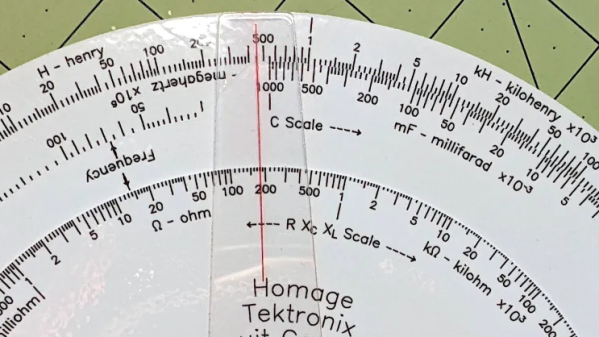 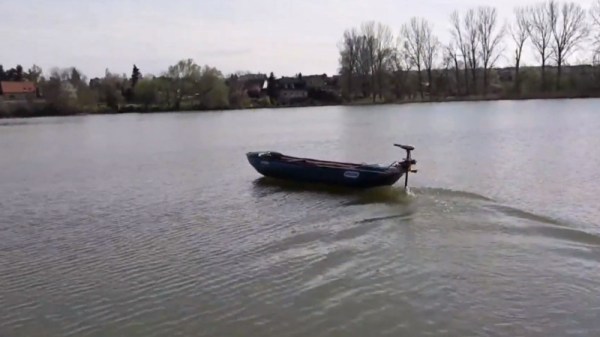 With the summer months nearly upon us, many are dreaming of warm afternoons spent floating on a quiet lake. Unless you’re [Kolins] anyway. Apparently his idea of a good time is controlling a full-sized inflatable canoe not from onboard with a pair of oars, but from the shore with a RC transmitter.

Of course, as the video after the break shows, just because the canoe is powered by a remotely operated electric trolling motor doesn’t mean it can’t still carry human occupants. In fact, with the addition of a Matek F405-Wing flight controller running the rover variant of ArduPilot, the boat can even take you on a little tour of the lake while you kick back and relax.

We like that this project took the path of least resistance wherever possible. Rather than trying to spin up his own custom propulsion unit, and inevitably dealing with the challenge of waterproofing it, [Kolins] built his system around a commercial trolling motor. A clever servo mechanism physically turns the motor in much the same way a human operator would, while the speed is controlled with a suitably beefy ESC from Traxxas placed between the motor and its lead-acid battery.

It doesn’t look like there’s been any permanent mechanical or electrical changes made to the motor, which makes the whole thing a lot easier to replicate. We’ve talked in the past about the relative rarity of low-cost robotic watercraft, so a “bolt-on” propulsion module like this that can turn a cheap inflatable boat into an autonomous platform for research and experimentation is very interesting.

END_OF_DOCUMENT_TOKEN_TO_BE_REPLACED

It looks like the ongoing semiconductor shortage isn’t getting any better, and if the recent spate of computer thefts from semi trucks is any indication, it’s only going to get worse. Thieves seem to be targeting the Freightliner Cascadia, probably the most popular heavy freight truck on the road in North America today, with “smash and grab” thefts targeting the CPC4, or Common Powertrain Control module. These modules are sitting ducks — they’re easy to locate and remove, the chip shortage has made legit modules nearly unobtanium from dealers, and the truck won’t run without them. That’s driven the black market price for a CPC up to $8,000 or more, making them a tempting target. And it’s not only individual trucks parked in truck stop lots that are being hit; gangs are breaking into trucking company lots and bricking dozens of trucks in short order. So the supply chain problem which started the semiconductor shortage caused the module shortage, which drives the thieves to steal modules and take trucks off the road, which only worsens the supply chain shortage that started the whole thing. Nice positive feedback loop.

END_OF_DOCUMENT_TOKEN_TO_BE_REPLACED 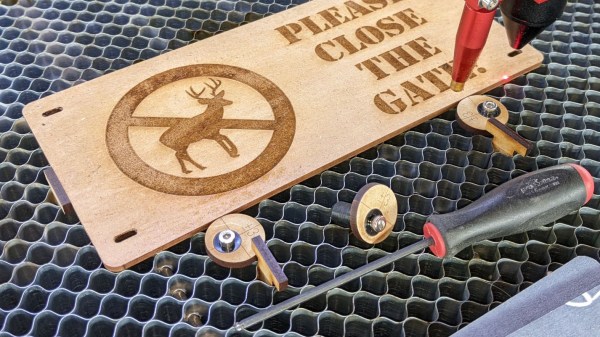 Honeycomb tables are often found on laser cutters, where they provide a way for work material to be laid flat while not interfering with things like airflow. This leads to a cleaner laser cut and a nicer finish, but if one’s work depends on precise positioning and placement, they leave something to be desired because there’s no good way to attach rails, jigs, or anything of the sort in an easy and stable fashion. 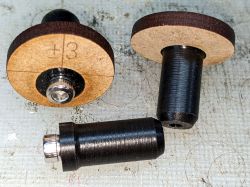 The whole thing depends on a friction fit, so the sizing of the plug needs to match a particular honeycomb table’s construction. We think this makes it a good match for 3D printing, as one can measure and print plugs (perhaps employing the Goldilocks approach) that fit with just the right amount of snug.

Honeycomb tables are fantastic for laser cutting, but if you find yourself in a pinch for a replacement, an old radiator can make a pretty decent stand-in. 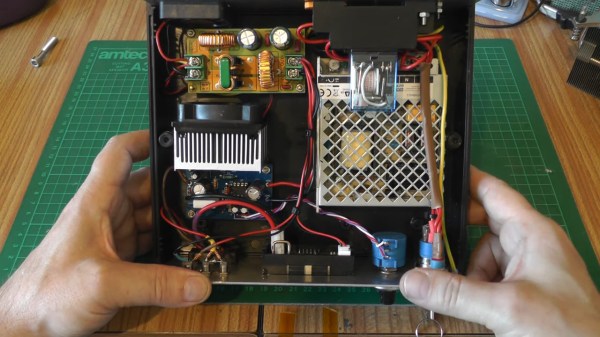 [Les] from [Les’ Lab] has designed a driver for laser diodes up to 10 watts, and decided to show us how it operates, tells us what we should keep in mind when designing such a driver, and talks about laser safety in general. This design is an adjustable current regulator based on the LM350A, able to provide up to 10 watts of power at about 2 volts – which is what his diode needs. Such obscure requirements aren’t easily fulfilled by commonly available PSUs, which is why a custom design was called for.

He tells us how he approached improving stability of the current regulation circuit, the PCB design requirements, and planning user interface for such a driver. However, that’s just part of the battle – regulating the current properly is important, but reducing the potential for accidental injuries even more so. Thus, he talks extensively about designing the driver circuit with safety in mind – using various kinds of interlocks, like a latching relay circuit to prevent it from powering up as soon as power is applied.

END_OF_DOCUMENT_TOKEN_TO_BE_REPLACED 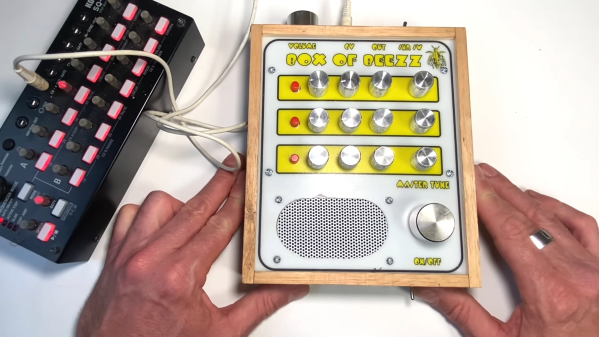 You’d think that a synthesizer that makes as much noise and sports as many knobs as this one would have more than a dozen transistors on board. Surely the circuit behind the panel is complex, and there must be at least a couple of 555 timers back there, right?

But no, the “Box of Beezz” that [lonesoulsurfer] came up with is remarkably simple. Taking inspiration from a [Look Mum No Computer] circuit called the “Circle Drone of Doom,” which used six switchable relaxation oscillators to make some pretty cool sounds. The Box of Beezz steps that up a bit, with four oscillators in three switchable banks in the final version. Each oscillator has but one transistor with a floating base connection and a simple RC network on the collector. The sawtooth outputs of these relaxation oscillators can be adjusted and summed together, resulting in some surprisingly complex sounds. Check out the video below for a bit of the synth’s repertoire — we’d swear that there are points where we can hear elements of the THX Deep Note in there.

We poked around a bit to understand these oscillators, and it looks like these qualify as avalanche relaxation oscillators. [lonesolesurfer]’s notes indicate that SS9018 transistors should be used, but in the photos they appear to all be 2N4401s. We’re not sure how long the transistors will last operating in the avalanche mode, but if they quit, maybe some neon tubes would work instead.

END_OF_DOCUMENT_TOKEN_TO_BE_REPLACED 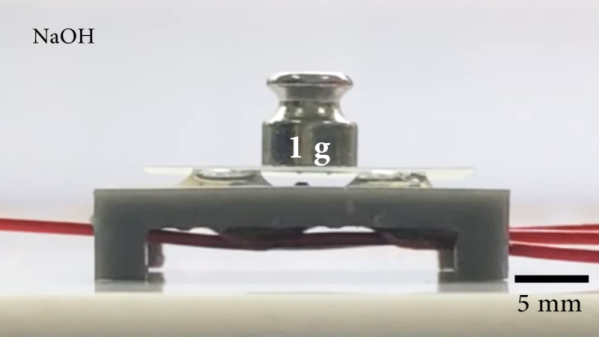 In the movie Terminator 2, the T-1000 robot was made of some kind of liquid metal that could change shape among other interesting things. According to a chemical engineer at North Carolina State University, there may be something to the idea. [Michael Dickey] has been experimenting with gallium, a liquid metal, that scientists think may unlock a new generation of flexible devices.

The most common liquid metal is mercury, of course, and it has its uses. However, its toxicity has led to a reduction in its use. Gallium has low toxicity and also doesn’t easily evaporate. What can you do with it? Check out the video below to see a very simple demonstration of the liquid metal lifting a small — very small — weight with an electrical impulse.