The prevalence of drones has made airborne photography much more widespread, especially among hobby photographers and videographers. However, drone photos aren’t without their problems. You have to deal with making the drone follow the shot which can be difficult unless you have a very expensive one. Worse, you can’t really fly a drone through heavily wooded or otherwise obstructed terrain.

[Makesome’s] friend faced these issues and wanted to buy a cable cam — a mount for the camera that could go back and forth on a cable strung between two trees or other structures. Instead of a design from scratch, they decided to cannibalize a cheap RC car along with an HP printer and the effect — as you can see in the video below — is pretty good.

Repurposing toys is an honored tradition and, after all, what do you need but a motor that goes forward and reverses? We can’t help but notice though that toy hacking is much easier now that you can 3D print custom widgets to connect everything together.

END_OF_DOCUMENT_TOKEN_TO_BE_REPLACED 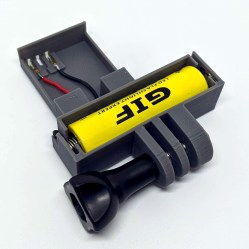 [Facelesstech] owns an SJCAM SJ4000 action camera, but the internal battery was no longer functional. Not wishing to buy a replacement and unwilling to hook up an ungainly USB cable to feed power, the solution was to design and 3D print an adapter to power the camera from a single rechargeable 14500 sized battery (which is the same size as an AA cell, and a good match for the width of the camera.) 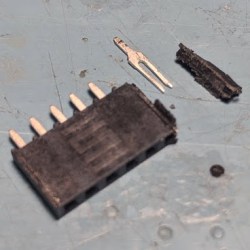 The adapter works by mimicking the original battery, so the camera never knows the difference. A 3D-printed holder for the 14500 battery (which doubles as a GoPro compatible mount) has an extension the same size and shape of the camera’s original internal battery. The tricky part was interfacing to the power connectors buried inside the camera’s battery bay. For a solution, [Facelesstech] eventually settled on the small connectors harvested from inside a female header, using them to connect to the small blades inside the camera. We broke open a spare female 0.1″ header, shown here, to make it clear where these little pieces come from. The only other battery hardware needed are the contacts for an AA cell, but those are also easy to harvest and reuse.

The GitHub repository for the project includes STL files as well as the FreeCAD files for the parts. A video overview is embedded below.

END_OF_DOCUMENT_TOKEN_TO_BE_REPLACED

A sub-$100 camera competing in the 4K market, the Akaso EK7000 has a few features typical for the range: wifi, 12MP photos at 30 frames per second, and the like. [Foxx D’Gamma] wanted to add an external mic jack to his camera, replacing the internal mic, which featured poor sound pickup due to being buried in the heart of the camera. [Foxx] spent a considerable amount of effort getting the enclosure apart, working gingerly to avoid damaging the display’s ribbon cable, which can’t be disconnected. He also had to deal with the button covers falling out when the case was opened.

[Foxx] desoldered the button mic and added the jack’s wires, and the next challenge presented itself: getting it back together again with the mic port looking good. He had to make sure the jack projected just the right amount from the housing, to ensure the external mic could plug in. Check out both videos below the break.

We’ve featured several cheap camera hacks recently on Hackaday: the ruggedized cheap camera, the cheap 360 degree camera, and the full-spectrum camera all come to mind. It’s a fertile field for not a lot of money!

END_OF_DOCUMENT_TOKEN_TO_BE_REPLACED

Action cameras like the GoPro, and the Sony Action Cam are invaluable tools for cyclists and anyone else venturing into the great outdoors. These cameras are not really modifiable or usable in any way except for what they were designed for. [Connor] wanted a cheaper, open-source action camera and decided to build one with the Raspberry Pi.

[Connor]’s Pi action cam is built around the Raspberry Pi Model A+ and the Pi camera. This isn’t a complete solution, so [Connor] added a bluetooth module, a 2000 mAh battery, and a LiPo charger.

To keep the Pi Action Cam out of the elements, [Connor] printed an enclosure. It took a few tries, but eventually he was able to mount everything inside a small plastic box with buttons to start and stop recording, a power switch, and a USB micro jack for charging the battery. The software is a script by [Alex Eames], and the few changes necessary to make this script work with the hardware are also documented.

This was the most intensive 3D printing project [Connor] has ever come up with, and judging by the number of prints that don’t work quite right, he put a lot of work into it. Right now, the Pi action cam works, but there’s still a lot of work to turn this little plastic box into a completed project.