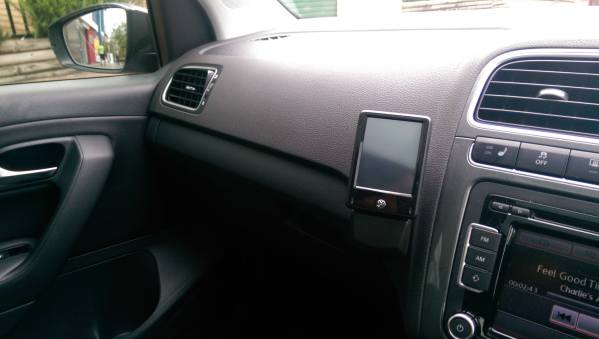 [Bogdan] received this set of Serioux Panda speakers as a gift. I turns out that they sound very good and he decided to make them more useful to him by converting them to work as Bluetooth speakers.

To begin with he bought the cheapest A2DP device he could find. This is the protocol that identifies a Bluetooth audio device. The unit is designed to provide a Bluetooth connection for a set of headphones. He patched into the headphone port on that board, but also wanted to keep the option of using the Panda speakers’ line-in. To do this he added a 1k resistor to each of the audio channels. A connection was made from the 5V rail of the speakers to power the Bluetooth module rather than leaving it with its own battery.

Speaking of batteries, the Panda speakers can run from three AAA cells. This battery compartment was a perfect place to mount the add-on hardware. But the speaker can still be powered from a USB connector. Above [Bogdan] is using a portable USB power supply. In middle of all the adding features that should have been available day-one, Apple announced something really interesting for the hardware hacking community. The new iPhone 3.0 OS will support application communication over bluetooth or through the dock connector using standard or custom protocols. From Engadget’s coverage:

10:19AM “They talk over the dock, and wirelessly over Bluetooth. Things like playing and pausing music, getting artwork — or you can build your own custom protocols.”
10:19AM “Now here’s a class that we think will be really interesting — medical devices.” Scott’s showing off a blood pressure reader that interfaces with the iPhone — wild.
10:18AM “Here’s an example — an FM transmitter. With 3.0, the dev can build a custom app that pairs up with it, and automatically finds the right station and tunes it in.”
10:18AM “With 3.0, we’re going to enable accessory developers to build custom apps that talk directly to that hardware.”

No solid connection specification has been published yet. We’re excited about the prospect of developing our own accessory hardware, but we wonder what sort of hoops you’ll have to jump through. Apple doesn’t have the best track record when it comes to approvals. Just this week they denied MSA Remote client App Store entry; it’s a multitouch client that uses the standard TUIO protocol. Prepare for similar roadblocks in the future.