If you like LED clocks and illuminated bicycle wheels, [Harald Coeleveld] has just the right weekend project for you. His RGB pixel LED clock is as simple as it is beautiful, and it can be built in no time: The minimalist and sporty design consist of not much more than a LED strip wrapped around a bicycle wheel rim.

[Harald] took 2 meters of addressable WS2812 LED strip (with 30 LEDs per meter, we assume), wrapped it around a 27″ bicycle rim padded with a foam strip, and obtained 60 equally spaced RGB LEDs on a ring, ideal for displaying time. Apparently, the rim-tape circumference of this particular 27″ bicycle wheel is close enough to 2 meters, so it lines up perfectly.

On the electronics side, the project employs an Arduino Nano and a DS3231 precision RTC module. For switching between two illumination modes for day and night, [Harald] also added a photoresistor. During the day, colored dots around the ring display the time: A red dot for the seconds, a blue one for the minutes, and a group of 3 green LEDs for the hours. At night, the entire ring shimmers with an effective red glow for easier readability.

The Arduino code for this build can be downloaded from the project page, enabling anyone to effortlessly replicate this design-hack in under an hour!

[Rulof] never ceases to impress us with what he comes up with and how he hacks it together. Seriously, how did he even know that the obscure umbrella part he used in this project existed, let alone thought of it when the time came to make a magnet mount? His hack this time is a real world, tabletop race track made for his little brother, and by his account, his brother is going crazy for it.

His race track is on a rotating table and consists of the following collection of parts: a motor, bicycle wheel, casters from a travel bag, rubber bands (where did he get such large ones?), toy car and steering wheel from his brother, skateboard wheels, the aforementioned umbrella part and hard drive magnets. In the video below we like how he paints the track surface by holding his paint brush fixed in place and letting the track rotate under it.

From the video you can see the race track has got [Rulof] hooked. Hopefully he lets his brother have ample turns too, but we’re not too sure. Some additions we can imagine would be robotics for the obstacles, lighting, sounds and a few simulated explosion effects (puffs of flour?).

END_OF_DOCUMENT_TOKEN_TO_BE_REPLACED 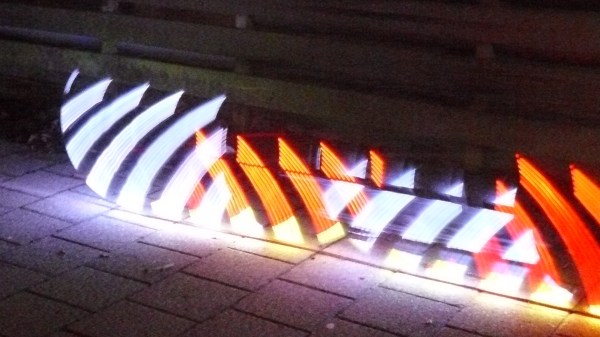 [Yvo] sent us his latest creation, this awesome POV RGB bicycle rim light build, which features a circular interweaving of common RGB LEDs that face outward along the rim as they display constantly changing animations based on the wheel’s rpm.

Like many POV wheel builds, [Yvo]’s takes advantage of a hall effect sensor and stationary magnet to determine how fast the wheels are spinning. Unlike most POV builds, however, [Yvo’s] creation doesn’t have just one or two RGB sticks clamped onto a spoke. Instead, his wheels boast several individual RGB LED modules mounted along the rim.

Each wheel has six modules, and each module contains a scratch-build LED controller (a daisy chain of 74HC595 shift registers) that fits into a custom-made 3D-printed enclosure. The enclosures mounts onto some aluminum strips along with the RGB LEDs, and the aluminum strips mount to the wheels by straddling the rim.

At speed, the lights go into POV mode to simulate headlights / brakes with white in the front and red in the back. Check out the difference these custom circular modules make when riding and when at rest in a video below.

END_OF_DOCUMENT_TOKEN_TO_BE_REPLACED 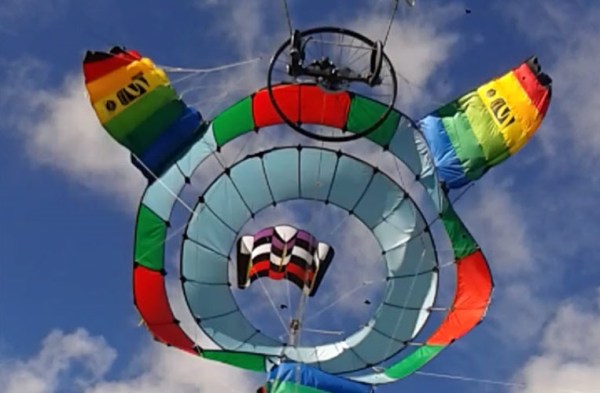 Got another THP entry for ya’ll that didn’t quite make the cut, but is worth sharing. This time we are featuring an airborne wind turbine that, as the project description states, ‘can harvest strong and expansive wind safely and efficiently.’

Ram air kites spin a parachute that in turn transfers torque that can be captured on the ground. In a true hacker spirit way, the rig developed by [Rod] utilizes bike wheels and rollerblade wheels in the design. This homemade generator needs a lot of space to be deployed, but it looks like a nice solution to airborne energy harvesting. [Rod] goes over the specifications for the project throughout the build logs on the Hackaday.io page and includes a couple of video describing how it was created and showing what happens when it is released into the air currents outside. Diagrams and models of the open source airborne wind energy generation device are also included.

Below are a few of his videos. Watch them over, and let us know what you think.

This project is an official entry to The Hackaday Prize that sadly didn’t make the quarterfinal selection. It’s still a great project, and worthy of a Hackaday post on its own.
END_OF_DOCUMENT_TOKEN_TO_BE_REPLACED