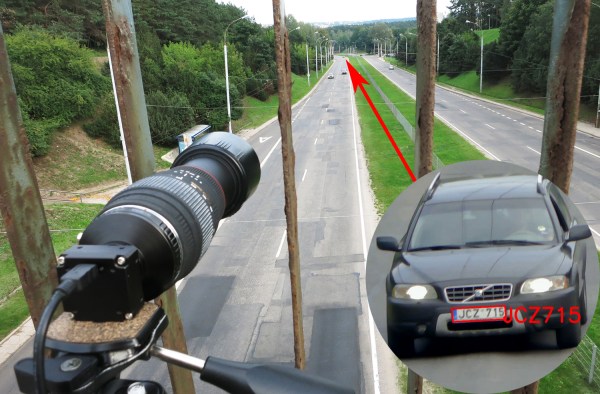 We are all (hopefully) aware that we can be watched while we’re online. Our clicks are all trackable to some extent, whether it’s our country’s government or an advertiser. What isn’t as obvious, though, is that it’s just as easy to track our movements in real life. [Saulius] was able to prove this concept by using optical character recognition to track the license plate numbers of passing cars half a kilometer away.

To achieve such long distances (and still have clear and reliable data to work with) [Saulius] paired a 70-300 mm telephoto lens with a compact USB camera. All of the gear was set up on an overpass and the camera was aimed at cars coming around a corner of a highway. As soon as the cars enter the frame, the USB camera feeds the information to a laptop running openALPR which is able to process and record license plate data.

The build is pretty impressive, but [Saulius] notes that it isn’t the ideal setup for processing a large amount of information at once because of the demands made on the laptop. With this equipment, monitoring a parking lot would be a more feasible situation. Still, with even this level of capability available to anyone with the cash, imagine what someone could do with the resources of a national government. They might even have long distance laser night vision!

The web is abuzz with the news that the Facebook-owned Oculus Rift has buried in its terms of service a clause allowing the social media giant access to the “physical movements and dimensions” of its users. This is likely to be used for the purposes of directing advertising to those users and most importantly for the advertisers, measuring the degree of interaction between user and advert. It’s a dream come true for the advertising business, instead of relying on eye-tracking or other engagement studies on limited subsets of users they can take these metrics from their entire user base and hone their offering on an even more targeted basis for peak interaction to maximize their revenue.

Hardly a surprise you might say, given that Facebook is no stranger to criticism on privacy matters. It does however represent a hitherto unseen level of intrusion into a user’s personal space, even to guess the nature of their activities from their movements, and this opens up fresh potential for nefarious uses of the data.

Fortunately for us there is a choice even if our community doesn’t circumvent the data-slurping powers of their headsets; a rash of other virtual reality products are in the offing at the moment from Samsung, HTC, and Sony among others, and of course there is Google’s budget offering. Sadly though it is likely that privacy concerns will not touch the non-tech-savvy end-user, so competition alone will not stop the relentless desire from big business to get this close to you. Instead vigilance is the key, to spot such attempts when they make their way into the small print, and to shine a light on them even when the organisations in question would prefer that they remained incognito. 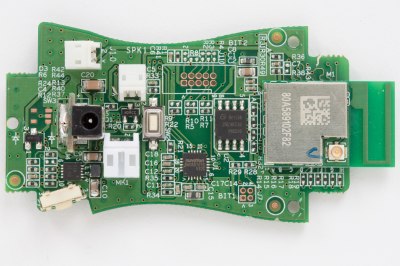