For the overwhelming majority of bicycles out there that feature multiple gears, switching between these is done purely mechanically, with a cable. Generally this uses a derailleur, which forms part of the gear switching and chain tensioning mechanism. As a mechanical system, it’s reliable when well maintained, but tuning it can be a real hassle. This is where an electronic shifter should be able to provide faster, more reliable and quieter shifting, and is also where [Jesse DeWald]’s electronic shifting project begins. 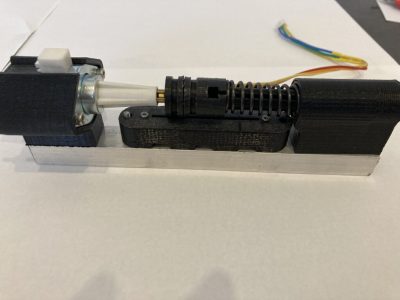 As [Jesse] points out in the introductory article on electronic shifting, it’s not a new concept, with everyone from Shimano (Di2) to Archer and others coming up with their own version. Some of these require replacing the existing derailleur, while others should allow for non-destructive modification. What [Jesse] did not find among this constellation of options was a version that’d work with existing derailleurs, did not require destructive modifications and have a long battery life.

[Jesse]’s design omits the servo present in Archer’s design, and uses the existing derailleur spring, with the reasoning explained in a nice spring physics refresher. Instead a stepper is used along with a matched balancer spring that in testing managed over 3 months of standby time with a 3,700 mAh Li-ion battery and thousands of shifts. At the core of the system is an Arduino Pro Mini board, the code for which is available along with the design plans.

The project is not done at this point, of course, with a whole range of improvements still to be added, including a case, so that the shifter can be used outside in the rain. 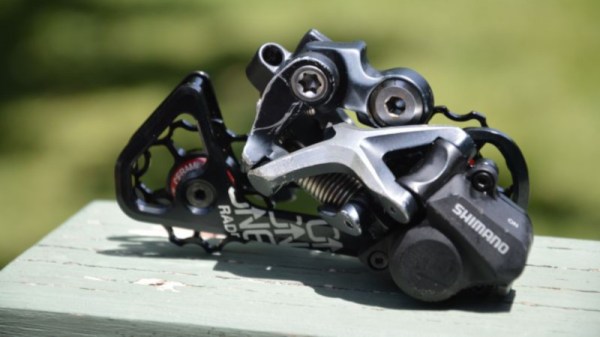 Mountain bikers take their sport seriously, and put their bikes through all manner of punishment in the course of a ride. This has given rise to a wide range of specialist equipment, such as suspension, disc brakes and even clutch derailleurs, which help reduce chain slap when riding over rough terrain. However, these specialist derailleurs aren’t available for all applications, so sometimes you’ve gotta hack together your own.

[SzurkeEg] was inspired by earlier work, and realised that by combining parts from several generations of Shimano hardware, it was possible to build a working clutch derailleur for 6 to 9 speed rear cassettes. The main parallelogram is what handles the positioning of the derailleur, and is sourced from a 9-speed part to get the gear indexes correct.The rest of the parts are sourced from later models with the clutch feature built in.

It’s a smart mechanical hack, and one that isn’t necessarily the most intuitive. But by having a go, and seeing what’s possible, now a whole generation of mountain bikes can tear up the trail like never before. We’ve seen Shimano gear hacked before, too. Video below the break. END_OF_DOCUMENT_TOKEN_TO_BE_REPLACED [Nabil] sent in an awesome electronic bicycle derailleur. Now, instead of pulling a steel cable with a shifting mechanism, [Nabil] can change gears electronically. As a bonus, the derailleur can be controlled by a small bicycle computer, so he’s always in the right gear.

The new electronic derailleur is controlled by a pair of servos with push buttons in the handle bar. This allows [Nabil] to automatically trim his chain, completely eliminating chain rub.

This electronic shifter is part of [Nabil]’s much large bike computer project. In addition to electronic control of what gear the bike is in, [Nabil] will be adding a GPS, accelerometer, an altimeter and a heart rate monitor and pulse ox meter. That’s an impressive bit of kit, and we cant wait to see the entire project finished. You can pick up the current version of the design over on GitHub and follow all the updates on [Nabil]’s blog.