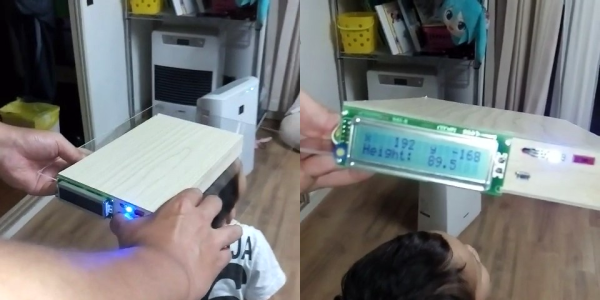 Sure we can have our kids back up against a wall, force them to stand up straight, and use a ruler on their head to mark their height on the wall, but what kind of hacker would we be? There isn’t a single microcontroller or any electronic component involved! The DIY-family that calls themselves [HomeMadeGarbage] stood tall and came up with a high-tech tool to measure their kid’s height.

In place of the ruler they got a small wooden box to place on the head. Under the box, at the rear end facing down, they mounted a VL53L0X laser ranging sensor. With a range of 2 meters it’s sure to work with any child. But the box has to be sat level on the child’s head, otherwise the laser will be pointing down at an angle. To handle that they put an MPU6050 6-axis motion sensor in the box along with an Arduino Nano to tie it all together. A LCD display, measurement push-button and LED are mounted outside the box on the rear facing side.

To use it, a parent sits the box on the child’s head, making sure the laser sensor isn’t blocked and can see the floor. The LCD shows the height, along with the acceleration in the x and y directions. The LED is red if the box isn’t level and green if it is. Holding the measurement button pressed puts the tool in measurement mode and when it’s level, the LED turns blue and the LCD display freezes so you can make a note of the height. You’re good for a while, depending on your child’s age. See it being used to measure a child after the break as well as an additional clip showing what the output looks like when waving a hand up and down below it.

END_OF_DOCUMENT_TOKEN_TO_BE_REPLACED 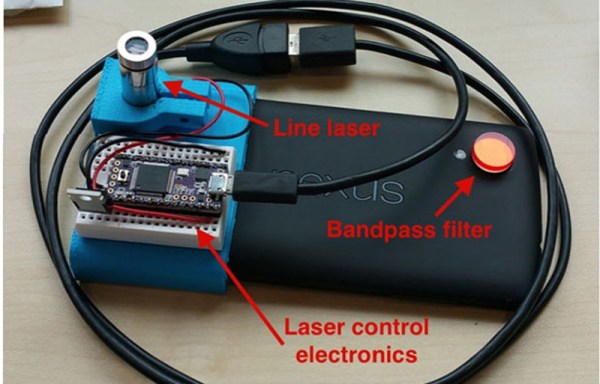 Measuring the distance using lasers is a mainstay of self-driving vehicles and ambitious robotics projects. The fine folks at MIT’s Computer Science and Artificial Intelligence Laboratory (CSAIL) decided to tackle the problem in an innovative way. [Jason H. Gao] and [Li-Shiuan Peh] used an infra-red (IR) line laser and the camera on a smartphone. Their prototype cost only $49 since they used a smartphone that was on hand. The article reports good results using the device outdoors in direct sunlight which is often a challenge for inexpensive lidars.

The line laser creates a horizontal line that is reflected back to the camera on the phone. The vertical position of the laser on the camera image lets the phone calculate the distance by parallax. To bring out a faint laser reflection, the algorithm compares four images – two with the laser on and two with it off – and subtracts the background. Using a smartphone for this is ideal since it automatically adjusts for light level and can easily be upgraded to a newer phone with a better camera later.

This should be a cheap and easily replicable setup. If you make one of these, let us know. If you need something more refined, check out this post on interfacing the Neato vacuum cleaner’s XV-11a lidar with the Raspberry Pi.

END_OF_DOCUMENT_TOKEN_TO_BE_REPLACED