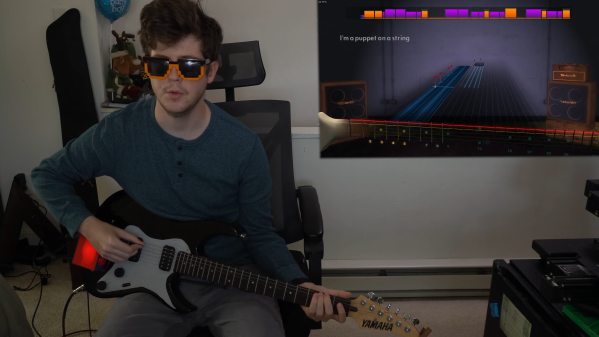 Rocksmith is a popular video game that works like Guitar Hero, but with a real guitar. You have to play well and hit the right notes, or the game penalizes your score. [Lightwing] took the stakes up a notch, though, adding a system that shocks the player every time they fail.

To achieve this, it was necessary to detect when the player missed a note. Initial attempts involved using Tensor Flow AI to detect the game state from the screen, but it was unreliable. Instead, the game’s memory was read to achieve detection. When the player misses a note, a certain section of memory changes, and a script reads the change in game state. It then sends a signal to an Arduino which triggers the stun gun’s fire button, which shocks the player holding the guitar.

As you might expect, the documentation for this project includes a video which involves plenty of gratuitous electric shocks when [Lightwing] makes mistakes. Fair warning — there’s plenty of colorful language when the stun gun fires. Generally, a powerful shock ends with screams a dropped guitar, and too much fear to continue.

It’s painful enough that it’s probably not a useful teaching tool for learning the guitar. We’ve seen similar shocking builds before, too, like this simple wire game.

END_OF_DOCUMENT_TOKEN_TO_BE_REPLACED 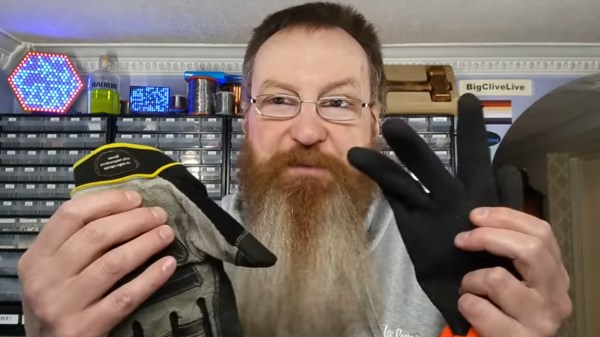 If you’re reading this sentence, there’s a pretty good chance that you interact with electricity more than just as an end-user. You’re a hacker. You aren’t afraid of a few volts, and your projects may involve both DC and AC voltage. Depending on what you’re working on, you might even be dealing with several thousand volts. And it’s you who Big Clive made the video below the break for.

“Familiarity breeds contempt” as the old saying goes, and the more familiar we are with electronics, the more cavalier we may tend to get. If we allow ourselves to get too lax, we may be found working on live circuits, skimping on safety for the sake of convenience, or jokingly saying “safety third!” far too often as we tear into a hazardous situation without scoping it out first.

Who better to bring us down to earth than Big Clive. In this video, he explains how electricity has the potential to impede the beating of our hearts, the action of our lungs, and even break bones. You’ll find a candid discussion about what electric shock does to a person, how to avoid it, and how to help if someone near you suffers electric shock.

Of course, if safety isn’t your thing, then maybe you’re ready to Shake Hands With Danger.

END_OF_DOCUMENT_TOKEN_TO_BE_REPLACED

We hope this project will make you laugh as much as we did. For 4 hours, some Australian advertising executives agreed to be subjected to Electric Muscle Stimulation (EMS) controlled by people from all over the globe watching their reaction over the Internet. The public could disrupt their day with a click of a mouse. The user simply needed to go online, choose a live stream, click the ‘Disrupt’ button and watch as the EMS instantaneously zapped the volunteers. For each ‘disruption’, the company donated $1 to a local community.

The EMS hardware was designed to deliver up to 60V pulses and controlled using the MIDI protocol. The platform is powered by 8 AA batteries and receives zapping commands via UDP. Unfortunately, the resources can’t be found on the project’s webpage, but you can still have a look at the two videos embedded after the break. The total amount donated during this experiment was $5500!