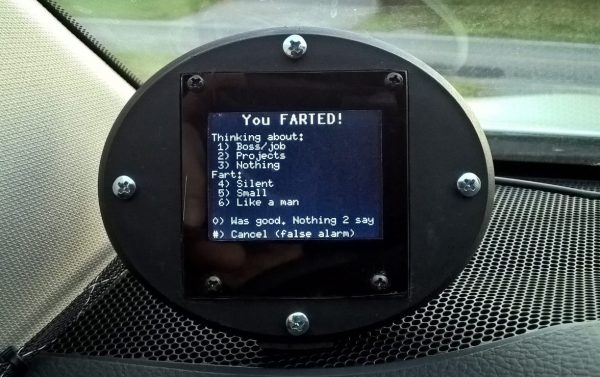 It’s taken as canon that girls mature faster than boys. In reality, what happens is that boys stop maturing at about age 12 while girls keep going. And nothing tickles the fancy of the ageless pre-teen boy trapped within all men more than a good fart joke. To wit, we present a geolocating fart tracker for your daily commute.

[Michel] is the hero this world needs, and although he seems to have somewhat of a preoccupation with hacks involving combustible gasses, his other non-methane related projects have graced our pages before, like this electrical meter snooper or an IoT lawn mower. The current effort, though, is a bit on the cheekier side.

The goal is to keep track of his emissions while driving, so with a PIC, an ESP8266, a GPS module, and a small LCD display and keyboard, he now has a way to log his rolling flatulence. When the urge overcomes him he simply presses a button, which logs his location and speed and allows him to make certain qualitative notes regarding the event. The data gets uploaded to the cloud every Friday, which apparently allows [Michel] to while away his weekends mapping his results.

It turns out that he mainly farts while heading south, and he’s worried about the implications both in terms of polar ice cap loss and how Santa is going to treat him next month. We’re thinking he’s got a lock on coal — or at least activated charcoal.

Our beef with this project is obvious – it relies on the honor system for input. We really need to see this reworked with an in-seat methane detector to keep [Michel] honest. Until then, stay young, [Michel]. If you’ve ever found yourself wondering if there’s any possible way to let those with deficient olfactory senses know just how flatulent you are, wonder no more. The Gas Cap is here to fulfill that very need. A bar graph of sorts, located on the front of a hat that will light up to reflect the amount of methane sensed near your, uh, exhaust port. This project cost around $100, though a good portion of that went to the Xbee modules so that the detector could be separated from the hat, allowing for remote fart notifications.

This seems to be a project that is not as uncommon as one might assume. We’ve seen fart intensity detectors as well as tweeting chairs that alert the world when you pass gas.

When we ran the story about the office chair that twittered your flatulent activity, many people commented on the fact that it had no method of determining intensity. Well, here’s the solution to that problem(is this really a problem?).  These students built a fart intensity detector for their final project in ece 476.  It measures the sound and temperature, as well as the composition of each fart. They really added some bells and whistles on this project. Not only will it display your statistics on and LCD screen after a reading, it will beep and, if your fart was intense enough, blow it away with a little fan. You even have the option of playing back the audio recording of your most recent glory.

We might have to add a category of “stuff made to twitter”. The latest installment is an office chair that twitters whenever it gets farted on. The author has a smart sounding description as to why he decided to make this, and he has a pretty good point about twittering interrupting the things you’re twittering about, but it all boils down to the fact that he wants to twitter his farts. We can’t say that we didn’t expect something along these lines. He has mounted a natural gas sensor in his chair, along with a squidbee wireless transceiver. You can download all the code as well as see the construction in the instructable. You can also follow his flatulent adventures on the twitter account of the office chair.