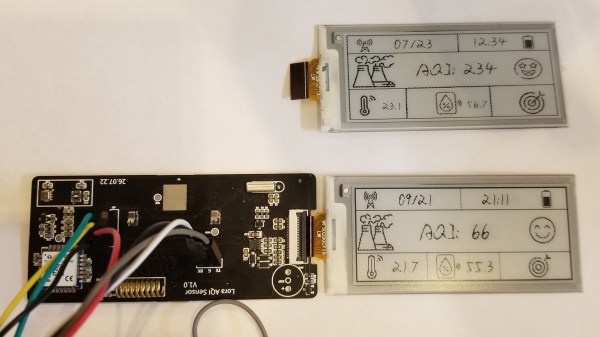 [Aduecho] had seen those cheap eBay deals of e-paper-based pricing tags, and was wondering if they could be hacked to perform some other tasks. After splitting the case open, the controller chip was discovered to be a SEM9110, with some NFC hardware support but little else. [aduecho] was hoping to build some IoT-connected air quality indicator (AQI) units but the lack of a datasheet for SEM9110 plus no sensors in place meant the only real course of action was to junk the PCB and just keep the E-paper display and the batteries. These units appeared to be ‘new old’ stock, so there was a good chance that both would be fresh and ripe for picking.

The PCB [aduecho] came up with is mechanically the same as the original unit, but now sports a Seeed studio Wio-E5 LoRa module, which uses the STM32WLE5 from ST for the heavy lifting. This has what looks like a Semtech SX126x integrated on-die (we can’t think of a sane way an actual SX126x die could be flip-chip mounted, but you never know). Using this module is a snap, needing only very minimal antenna-matching components and a spot of decoupling to function. On the sensing side of things, a Bosch BME680 gas sensor handling the AQI measurements, and a Bosch BMI270 6-axis IMU, provides a gyro and accelerometer, for all those planned user interaction features. As can be seen from the schematic, interfacing the EPD is pretty straightforward, just a handful of parts are needed to generate the necessary bipolar gate voltages via a simple SMPS circuit. The display controller handles it all internally, programmed via an SPI interface.

One area we’re quite fond of in this project are the neat hand-drawn icons, and variable width font, giving the display a kind of note-like quality when drawn on the low-ish contrast e-paper display.

Air quality measurement projects grace these pages from time to time, like this hacked Ikea Vindriktning, and this very similar Wio-E5-based project we covered last month. 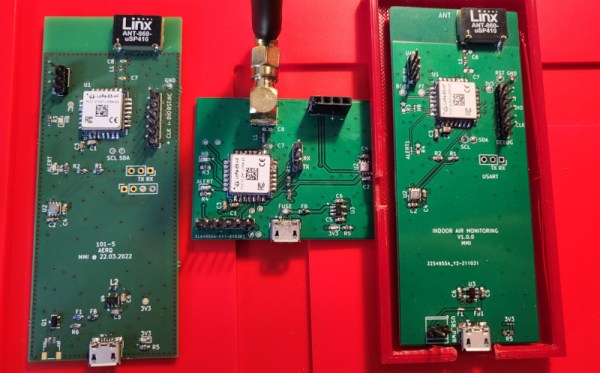 We’ve seen an incredible number of homebrew environmental monitors here at Hackaday, and on the whole, they tend to follow a pretty predicable pattern. An ESP8266 gets paired with a common temperature and humidity sensor, perhaps a custom PCB gets invited to the party, and the end result are some values getting pushed out via MQTT. It’s a great weekend project to get your feet wet, but not exactly groundbreaking in 2022.

Which is why we find the AERQ project from [Mircea-Iuliu Micle] so refreshing. Not only does this gadget pick up temperature and humidity as you’d expect, but its Bosch BME688 sensor can also sniff out volatile organic compounds (VOCs) and gases such as carbon monoxide and hydrogen. The datasheet actually claims this is the “first gas sensor with Artificial Intelligence (AI)”, and while we’re not sure what exactly that means in this context, it’s a claim that apparently warrants a price tag of $15+ USD a pop in single quantities.

But the fancy sensor isn’t the only thing that sets AERQ apart from the competition. Instead of a member of the ubiquitous ESP family, it’s using the Wio-E5, a relatively exotic STM32 package that integrates a long-range LoRa radio. [Mircea-Iuliu] has paired that with a Linx USP-410 chip antenna or, depending on which version of the four-layer PCB you want to use, a u.Fl connector for an external antenna. The whole thing is powered by a simple USB connection, and its Mbed OS firmware is setup to dump all of its collected data onto The Things Network.

All told, it’s a very professional build that certainly wouldn’t look out of place if it was nestled into some off-the-shelf air quality monitor. While the high-end detection capabilities might be a bit overkill for home use, [Mircea-Iuliu Micle] points out that AERQ might provide useful insight for those running indoor events as COVID-19 transitions into its endemic stage. 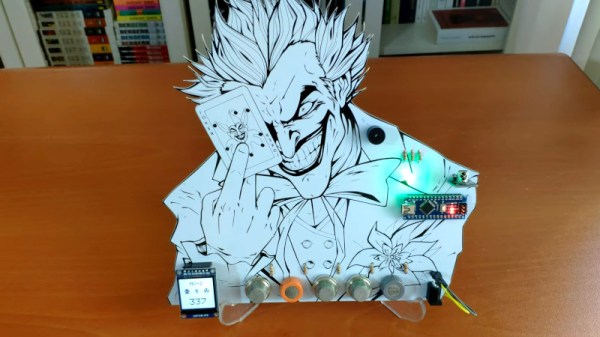 The Joker is a popular character in the Batman franchise, and at times uses poisonous gases as part of his criminal repertoire. That inspired this fun project by [kutluhan_aktar], which aims to monitor the level of harmful gases in the air.

The project doesn’t use just one gas sensor, but several! It packs the MQ-2, MQ-3, MQ-4, MQ-6, and MQ-9. This gives it sensitivity to a huge variety of combustible gases, as well as detecting carbon monoxide. The sensors are read by an Arduino Nano, which displays results on an RGB LED as well as an attached IPS screen.

Readings from each sensor can be selected by using an infrared remote. In order to best work as a safety device, however, it could be more useful to have the Arduino automatically cycle through each sensor, checking them periodically and raising an alarm in the event of a high reading.

The whole project is built on a custom PCB which is artfully constructed with an image of the Joker himself. It helps to make the project a bit more of a display piece, and speaks to the aesthetic skills of its creator.

It’s a fun build, and one that could be mighty capable with a few software tweaks. With that said, if you’re working in a space with real hazards from combustible gases, it may be worth investing in some properly rated safety equipment rather than relying on an Arduino project.

Incidentally, if you’d like to improve the results from using such gas sensors, we’ve looked at that in the past. Video after the break.

END_OF_DOCUMENT_TOKEN_TO_BE_REPLACED

If you need a sensor to detect gasses of some sort, you’ll probably be looking at the MQ series of gas sensors. These small metal cylinders contain a heater and some electrochemical sensor. Wire the heater up to a voltage, and connect one end of the resistor to an ADC, and you have a sensor for alcohol vapors, hydrogen sulfide, carbon monoxide, or ozone, depending on which model of sensor you’ve picked up.

There’s a difference between accuracy and precision, and if you want to calibrate gas sensors, you’ll need to calibrate them against something. Instead of digging out a gas sensor of known precision, [Davide] took the easy way out: he graphed the curves on the datasheets for these sensors. It’s brilliant in its simplicity.

These numbers were thrown into R, and with a bit of work, [Davide] had a look up table of various concentrations of gasses plotted against certain resistances. In testing these sensors, he found a higher correlation between humidity and temperature and gas concentrations, which one would expect.

The files for these sensors are available on [Davide]’s website, and he included a neat little video showing everyone what went into these calculations. You can check that out below.

END_OF_DOCUMENT_TOKEN_TO_BE_REPLACED

A month ago, Hackaday landed at the NYC TechCrunch Disrupt, a bastion of people up all night on MacBooks and immense amounts of caffeine and vitamin B12. For 20 hours, everyone was typing away trying to build the next great service that would be bought by Google or Amazon or Facebook. Tucked away in one small corner of the room was the Hackaday crew, giving out dev boards, components, and advice to the few dozen hardware hackers at Disrupt. [David], one of these Hackaday enthusiasts won the Twilio Sponsorship Prize at Disrupt, and now it’s a Hackaday Prize entry.

[David]’s dad has a little bit of paranoia of accidentally leaving the stove on. This usually manifests itself a few minutes after leaving the house, which means turning the car around just to make sure the stove was off. At the TechCrunch hackathon, [David] built a small IoT device to automatically read the temperature of the stove, send that off to the Internet, and finally as an SMS via Twilio.

The hardware [David] is using is extremely minimal – a thermopile, a gas sensor, a WiFi module, and a microcontroller. There’s a lot of iterations in this project, with [David] looking at everything from TI MSP430s to Teensys to Arduinos to ESP8266 modules. Still, rough prototype thrown together in 20 hours is all you need to win the Twilio prize at Disrupt, and that’s more than enough for a very good Hackaday Prize entry.

A bit of biology and nutrition before we roll into this: Ketosis is when your body runs on fat reserves instead of carbohydrates. This is the basis of diets such as Atkins, and despite the connotations of eating hamburger patties and butter, you can actually lose weight on these diets. One problem with a keto diet is the difficulty of measure how many ketones your liver is processing; this can be done with a urine sample, but being able to measure small amounts of acetone in your breath would be the ideal way to measure ketosis. [Jens] came up with a device that does just that. It’s called Ketosense, and it will tell you how well your keto diet is doing by just having you blow into a sensor.

[Jens]’ device consists of an Arduino, LCD display, and two sensors – one for acetone, and another for temperature and humidity. By carefully calibrating a TGS822 sensor, [Jens] was able to measure the acetone content of an exhaled breath along with temperature and pressure. This gave him a reading in parts per million, and with a short bit of math was able to convert that into something that made sense when talking about ketosis, mmol/l.

Without access to a lab that can measure blood ketone levels, it’s difficult to say if [Jens] device really works as intended. If he were to find his way into a lab, though, it would be possible to correlate his sensor’s values with blood ketone results and improve the accuracy of his sensor.