A month ago, Hackaday landed at the NYC TechCrunch Disrupt, a bastion of people up all night on MacBooks and immense amounts of caffeine and vitamin B12. For 20 hours, everyone was typing away trying to build the next great service that would be bought by Google or Amazon or Facebook. Tucked away in one small corner of the room was the Hackaday crew, giving out dev boards, components, and advice to the few dozen hardware hackers at Disrupt. [David], one of these Hackaday enthusiasts won the Twilio Sponsorship Prize at Disrupt, and now it’s a Hackaday Prize entry.

[David]’s dad has a little bit of paranoia of accidentally leaving the stove on. This usually manifests itself a few minutes after leaving the house, which means turning the car around just to make sure the stove was off. At the TechCrunch hackathon, [David] built a small IoT device to automatically read the temperature of the stove, send that off to the Internet, and finally as an SMS via Twilio.

The hardware [David] is using is extremely minimal – a thermopile, a gas sensor, a WiFi module, and a microcontroller. There’s a lot of iterations in this project, with [David] looking at everything from TI MSP430s to Teensys to Arduinos to ESP8266 modules. Still, rough prototype thrown together in 20 hours is all you need to win the Twilio prize at Disrupt, and that’s more than enough for a very good Hackaday Prize entry.

END_OF_DOCUMENT_TOKEN_TO_BE_REPLACED

Two weekends ago was the Bay Area Maker Faire, and lacking a venue to talk to people who actually make things, we had a meetup at a pub. This brought out a ton of interesting people, and tons of interesting demos of what these people were building. By either proclivity or necessity, most of these demos were very blinkey. The demo [Grant McGregor] from Monterey Community College brought was not blinkey, but it was exceptionally cool. He’s levitating objects in paramagnetic liquids with permanent magnets.

It’s a bizarre effect, but [Grant] mentioned a nurd rage video that shows the effect very clearly. [Grant]’s further experiments will be to replicate the Whitesides Research Group’s experiment to fix a diamagnetic object inside a magnetic field. As for any practical uses for this effect, you might be able to differentiate between different types of plastic (think 3D printing filament) with just a vial of solution and a strong magnet.

[Grant] was heading out of the pub right when I ran into him, but he did stick around long enough to run into the alley behind the pub and record an interview/demo. You can check that out below.

END_OF_DOCUMENT_TOKEN_TO_BE_REPLACED

This FPGA based build creates an interesting display which reacts to music. [Wancheng’s] Dancing Mandelbrot Set uses an FPGA and some math to generate a controllable fractal display.

The build produces a Mandelbrot Set with colours that are modified by an audio input. The Terasic DE2-115 development board, which hosts a Cyclone IV FPGA, provides all the IO and processing. On the input side, UART or an IR remote can be used to zoom in and out on the display. An audio input maps to the color control, and a VGA output allows for the result to be displayed in real time. 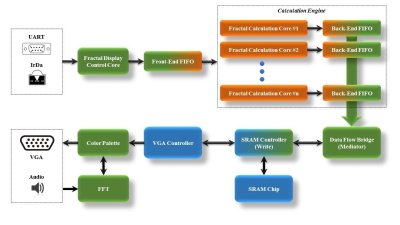 On the FPGA, a custom calculation engine, running at up to 150 MHz, does the math to generate the fractal. A Fast Fourier transform decomposes the audio input into frequencies, which are used to control the colors of the output image.

This build is best explained by watching, so check out the video after the break.

END_OF_DOCUMENT_TOKEN_TO_BE_REPLACED 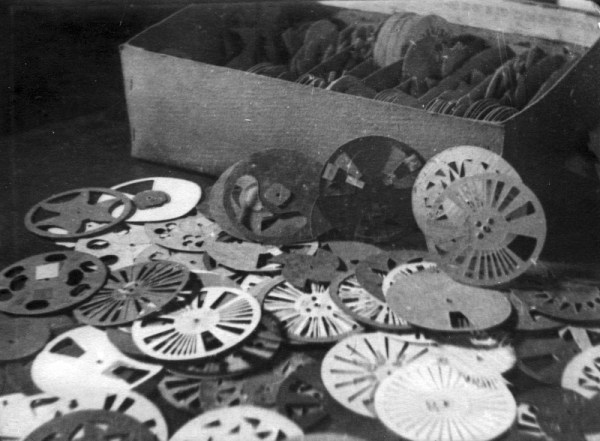 When you think of early sound synthesis, what technologies come to mind? The Hammond Organ?  Or perhaps its predecessor, Thaddeus Cahill’s Telharmonium? In the early 1920s and 30s, many Bauhaus artists were using paper and film to synthesize musical instruments.

A few of them experimented with the optical film soundtrack itself, drawing waveforms directly upon it. [Evgeny Sholpo] created an optical synthesizer he called the Variophone. It used cardboard disks with intricate cutout patterns that resembled spinning, sonic snowflakes.

During the early 1930s, an artist named [Nikolai Voinov] created short animated films that incorporated the cut paper sound technique. [Voinov]’s soundtrack looked like combs of varying fineness. For his animated figures, [Voinov] cut and pieced together characters from paper and made them move in time to his handmade paper soundtrack.

In [Voinov]’s “Dance of the Crow”, an animated crow struts his stuff from right to left and back again while working his beak in sync with the music. The overall effect is like a chiptunes concertina issuing forth from a crow-shaped pair of bellows. It’s really not to be missed.

END_OF_DOCUMENT_TOKEN_TO_BE_REPLACED

The LayerOne conference is over, and that means this last weekend saw one of the biggest demoscene parties in the USA. Who won? A European team. We should have seen this coming.

There were two categories for the LayerOne demo compo, the first using only the LayerOne Demoscene Board. It’s a board with a PIC24F microcontroller, VGA out, and a 1/8″ mono audio out. That’s it; everything that comes out of this board is hand coded on the PIC. A few months ago, [JKing] wrote a demo to demonstrate what this demoboard can do. According to him, it’s the only reason Hackaday sold a single Demoboard in the Hackaday store: