Who hasn’t dreamed of pulling together some gadget in their garage and turning it into a big business? Of course, most gadgets today have a CPU in them, and Arm CPUs power just about any kind of embedded device you can think of. If you just want to use a chip, that’s easy. You buy them from a licensee and you use their tools for development. But if you want to integrate ARM’s devices into your own chips, that’s a different story. You have to pay fees, buy tools, and pay licenses on each chip you produce. Until now. Arm’s flexible access for startups program will let you apply to get all of that free.

To qualify, you have to be an “early stage silicon startup with limited funding.” Normally, flexible access costs about $75,000 to $200,000 a year and that doesn’t cover your license fees and royalties. The plan offered to qualifying startups is the $75,000 package, but that still includes access to nearly all Arm products, technical support, a few introductory training credits, and development tools. After your first tape-out, though, it looks as though you’ll have to pony up.

END_OF_DOCUMENT_TOKEN_TO_BE_REPLACED 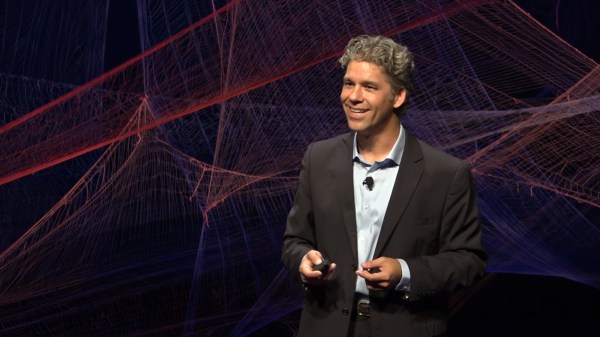 Bluntly stated, music is in the end just applied physics. Harmony follows — depending on the genre — a more or less fixed set of rules, and there  are a limited amount of variation possible within the space of music itself. So there are technically only so many melodies possible, making it essentially a question of time until a songwriter or composer would come up with a certain sequence of notes without knowing that they’re not the first one to do so until the cease and desist letters start rolling in.

You might well argue that there is more to a song than just the melody — and you are absolutely right. However, current copyright laws and past court rulings may not care much about that. Aiming to point out these flaws in the laws, musician tech guy with a law degree [Damien Riehl] and musician software developer [Noah Rubin] got together to simply create every possible melody as MIDI files, releasing them under the Creative Commons Zero license. While their current list is limited to a few scales of fixed length, with the code available on GitHub, it’s really just a matter of brute-forcing literally every single possible melody.

Admittedly, such a list of melodies might not have too much practical use, but for [Damien] and [Noah] it’s anyway more about the legal and philosophical aspects: musicians shouldn’t worry about getting sued over a few overlapping notes. So while the list serves as a “safe set of melodies” they put in the public domain, their bigger goal is to mathematically point out the finite space of music that shouldn’t be copyrightable in the first place. And they definitely have a point — just imagine where music would be today if you could copyright and sue over chord progressions.
END_OF_DOCUMENT_TOKEN_TO_BE_REPLACED 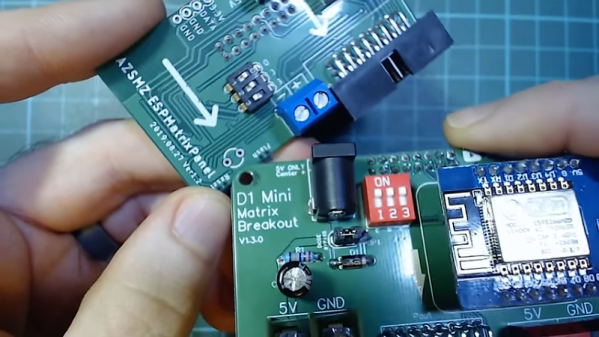 If imitation is the sincerest form of flattery, online creators are being sincerely flattered at an alarming rate these days. We Hackaday scribes see it all the time, as straight copy-pastes of our articles turn up on other websites under different bylines. It’s annoying, but given prevailing attitudes toward intellectual property rights, there’s very little point in getting upset about it anymore. But what if it’s hardware that’s being infringed upon?

Hacker and Tindie store proprietor [Brian Lough] recently ran into this problem with one of his products, but rather than get upset, he did a remarkably fair and thoughtful review of the knock-off. The board in question, a D1 Mini Matrix Shield, makes it a snap to use LED matrix panels in projects like his Tetris-themed YouTube sub counter. The knock-off came via Ali Express, with the most “flattering” aspect being the copy and the images on the Ali Express listing, some of which are pulled straight from [Brian]’s Tindie store. While the board’s layout is different, it’s pretty clear that it was strongly inspired by the original. And the changes they did make – like terminal choices and undersizing some traces – only serve to lower the quality of the knock-off. Surely this was a cost-cutting move, so they could undercut sales of the original, right? Apparently not – the knock off is more expensive. Yes, [Brian]’s board is a kit and the imitator is fully assembled, but it still begs the question of why?

Hats off to [Brian] for not only making a useful product, but for taking the time to engineer it properly and having the ambition to put it on the market. It’s a pity that someone felt the need to steal his work, but it seems to be a rite of passage these days.

END_OF_DOCUMENT_TOKEN_TO_BE_REPLACED 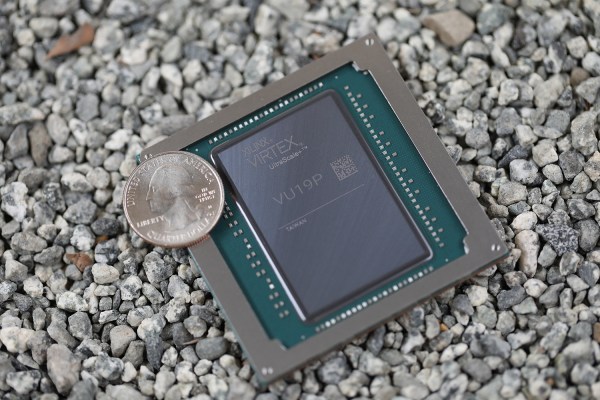 Xilinx recently announced the Virtex UltraScale+ VU19P FPGA. Of course, FPGA companies announce new chips every day. The reason this one caught our attention is the size of it: nearly 9 million logic cells and 35 billion transistors on a chip! If that’s not enough there is also over 2,000 user I/Os including transceivers that can move around 4.5 Tb/s back and forth.

To put things in perspective, the previous record holder — the Virtex Ultrascale 440 — has 5.5 million logic cells and an old-fashioned Spartan 3 topped out at about 50,000 cells — the new chip has about 180 times that capacity. For the record, I’ve built entire 32-bit CPUs on smaller Spartans.

That led us to wonder? Who’s buying these things? When I first heard about it I guessed that the price would be astronomical, partly due to expense but also partly because the market for these has to be pretty small. The previous biggest Xilinx part is listed on DigKey who pegs the Ultrascale 440 (an XCVU440-2FLGA2892E) at a cost of $55,000 as a non-stocked item. Remember, that chip has just over half the logic cells of the VU19P.

END_OF_DOCUMENT_TOKEN_TO_BE_REPLACED 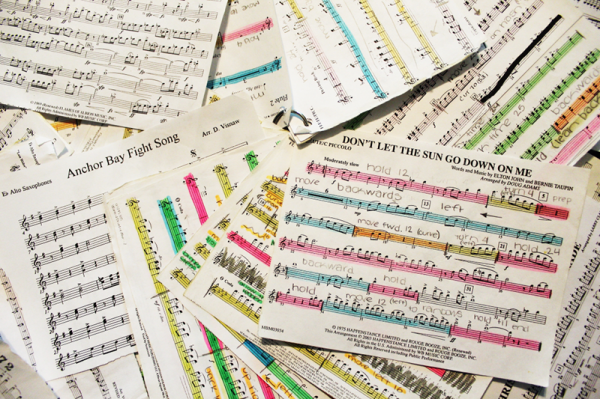 END_OF_DOCUMENT_TOKEN_TO_BE_REPLACED

A British company has filed a trademark application for the word ‘MakerSpace’. While we’ve seen companies attempt to latch on to popular Maker phrases before, Gratnells Limited, the company in question, is a manufacturer of plastic containers, carts, and other various storage solutions. These products apparently provide a space to store all the stuff you make. Something along those lines.

This isn’t the first time we’ve seen someone try to glom onto the immense amount of marketing Make: has put into the term ‘makerspace’. In 2015, UnternehmerTUM MakerSpaceGmbH, an obviously German tech accelerator based in Munich, filed an application to trademark the word ‘Makerspace’. A few days later, we got word this makerspace wasn’t trying to enforce anything, they were just trying to keep the rug from being pulled out from under them. It was a defensive trademark, if something like that could ever exist (and it can’t under US trademark law). Swift and efficient German bureaucracy prevailed, and the trademark was rejected.

The trademark in question here covers goods including, ‘metal hardware and building materials’, ‘trolleys, trolleys with trays’, ‘guide rails of non-metallic materials’, and ‘lids for containers’, among other storage-related items. While this is far outside the usual meaning for a ‘makerspace’ – a building or club with a whole bunch of tools – if this trademark is approved, there is always the possibility of overzealous solicitors.

Fortunately, Gratnells released a statement today saying they would not defend or continue this trademark. This is in light of the recent, limited reaction to the trademark application. The word Makerspace is safe again another day.

Thanks [Tom] for the tip. 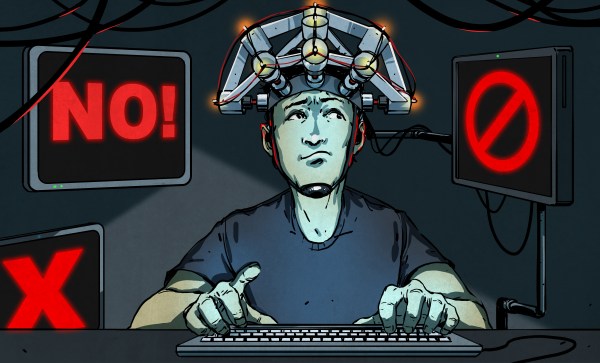 My buddy Harold recently landed a new job at a great technology company. It came at a perfect time for him, having just been laid off from the corporate behemoth where he’d toiled away as an anonymous cog for 19 years. But the day before he was to start, the new company’s HR folks sent him some last-minute documents to sign. One was a broad and vaguely worded non-compete agreement which essentially said he was barred from working in any related industry for a year after leaving the company.

Harold was tempted not to sign, but eventually relented because one needs to put food on the table. Thankfully he’s now thriving at the new company, but his experience got me thinking about all the complications hackers face with the day jobs that so many of us need to maintain. Non-competes and non-disclosures are bad enough, but there’s one agreement that can really foul things up for a hacker: the Intellectual Property Agreement.