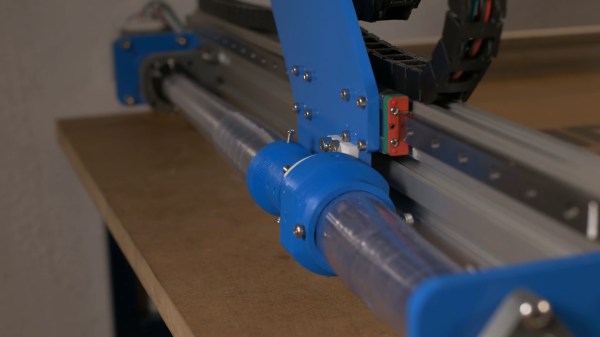 It’s a fact of life for CNC router owners — swarf. Whether it’s the fine dust from a sheet of MDF or nice fat chips from a piece of aluminum, the debris your tool creates gets everywhere. You can try to control it at its source, but swarf always finds a way to escape and cause problems.

Unwilling to deal with the accumulation of chips in the expensive ball screws of his homemade CNC router, [Nikodem Bartnik] took matters into his own hands and created these DIY telescopic ball screw covers. Yes, commercial ball screw covers are available, but they are targeted at professional machines, and so are not only too large for a homebrew machine like his but also priced for pro budgets. So [Nikodem] recreated their basic design: strips of thin material wound into a tight spring that forms a tube that can extend and retract. The first prototypes were from paper, which worked but proved to have too much friction. Version 2 was made from sheets of polyester film, slippery enough to get the job done and as a bonus, transparent. They look pretty sharp, and as you can see in the video below, seem to perform well.

It’s nice to see a build progress to the point where details like this can be addressed. We’ve been following [Nikodem]’s CNC build for years now, and it really has come a long way.

END_OF_DOCUMENT_TOKEN_TO_BE_REPLACED 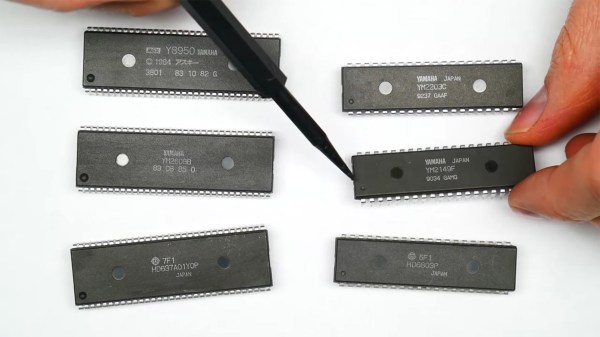 Those of us who have worked with vintage sound generator chips such as the Yamaha FM synthesizers in recent years have likely run into our own fair share of “fake” or “remarked” chips, sometimes relabeled to appear as a chip different than the die inside the packaging entirely. [David Viens] from Plogue has finally released his findings on the matter after 3 years of research. (Video, embedded below.)

The first thing to determine is in what way are these chips “fake”? Clearly no new YM2612’s were manufactured by Yamaha in 2015, but that doesn’t mean that these are simply unlicensed clones put out by another die factory. [David] explains how these chips are often original specimens sourced from recycled electronic waste from mostly environmentally unsafe operations in China, which are then reconditioned and remarked to be passed as “new” by resellers. Thankfully, as of 2017, he explains that most of these operations are now being shut down and moved into an industrial park where the work can be done in a less polluting manner.

The next thing that [David] dives into is how these remarked chips can be spotted. He explains how to use telltale signs in the IC packaging to identify which chip plant produced them, and visible indications of a chip that has been de-soldered from a board and reconditioned. There are different ways in which the remarking can be done, and sometimes it’s possible to undo the black-top, as it’s called, and reveal the original markings underneath with the simple application of acetone with a cotton swab.

We’ve talked about fake chips and how they can lead to hardware failure here before, but in the case of chips like these which aren’t manufactured anymore, we’re not left with much choice other than FPGA or software reimplementations. Check out [David]’s 40-minute look into these chips after the break.

END_OF_DOCUMENT_TOKEN_TO_BE_REPLACED 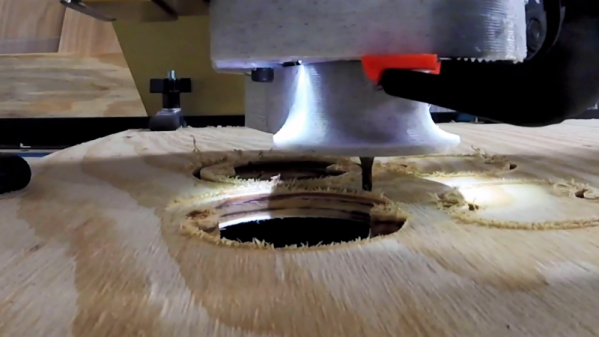 Everyone loves firing up that CNC router for the first time. But if the first thing you cut is wood, chances are good that the second thing you cut will be parts for some kind of dust shroud. Babysitting the machine and chasing the spindle around with a shop vac hose probably isn’t why you got it in the first place, right?

Trouble is, most dust-management designs just don’t get the job done, or if they do, they obstruct your view of the tool with a brush or other flexible shroud. [Jeremy Cook] figured he could do better with this coaxial dust collector, and from the practically dust-free cuts at the end of the video below, we think he’s right. The design is a two-piece, 3D-printed affair, with a collar that attaches to the spindle and a separate piece containing the duct. The two pieces stick together with magnets, which also lets the shroud swivel around for optimal placement. The duct surrounds the collet and tool and has a shop vac hose connection. In use, the vacuum pulls a ton of air through small opening, resulting in zero dust. It also results in the occasional part sucked up from the bed, so watch out for that. [Jeremy] has published the STL files if you want to make your own.

We’re pretty impressed, but if you still feel the need for a physical shroud, check out this shaggy-dog design that seems to work well too. Or you could just throw the whole thing in an enclosure.

END_OF_DOCUMENT_TOKEN_TO_BE_REPLACED 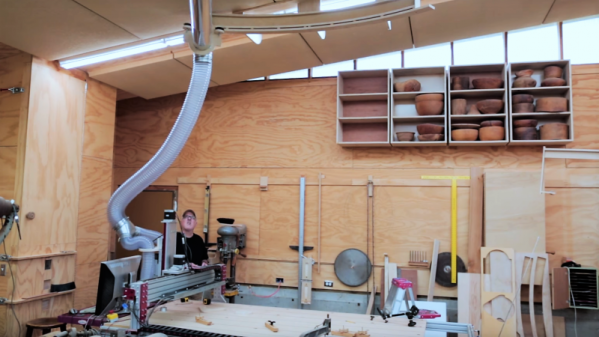 [Frank Howarth] has a shop most woodworkers would kill for, stuffed with enough tools to equip multiple hackspaces — four radial-arm saws alone! But while the CNC router in the middle of the shop, large enough to work on an entire sheet of plywood, is a gem of a machine, it was proving to be a dusty nightmare. [Frank]’s solution was as unique as his workspace — this swiveling overhead dust extraction system.

The two-part video below shows how he dealt with the dual problems of collection and removal. The former was a fairly simple brush-bristle shroud of the type we’ve featured before. The latter was a challenge in that the size of the router’s bed — currently 8′ but soon to be extended to 12′ — and the diameter of the hoses needed to move enough air made a fixed overhead feed impractical. [Frank]’s solution is an overhead trolley to support the hoses more or less vertically over the router while letting the duct swivel as the gantry moves around the work surface. There were a few pitfalls along the way, like hoses that shorten and stiffen when air flows through them, but in the end the system works great.

Chances are your shop is smaller than [Frank]’s, but you still need to control the dust. This dust collector for a more modest CNC router might help, as would this DIY cyclonic chip separator.

END_OF_DOCUMENT_TOKEN_TO_BE_REPLACED

The DS1077 is a 5volt, 133MHz to 16kHz programmable clock source. The internal frequency divider is configured over a simple I2C interface, and the chip requires no external parts. Not bad for under $2. We used the Bus Pirate to test this chip before using it in a project. Grab the datasheet (PDF) and follow along. END_OF_DOCUMENT_TOKEN_TO_BE_REPLACED Microfluidics expert [J. Tanner Neville] decided to turn his work into art. Along with his student, [Austin Day], they turned lab chips into miniscule works of art by developing a technique of patterning proteins onto substrates. Each colored line you see is actually a groove full of liquid about 20 microns in width. Another student of [Neville’s], [Albert Mach], is currently working on a method of preserving the liquid for longer amounts of time. As you can probably guess, the dye tends to dry up within a few days. He is also taking submissions for artwork, so we encourage you to submit! We’re certainly looking forward to what else [Neville] and his students come up with next.