Over the years we’ve seen many takes on the 7-segment display. Among the most interesting are the mechanical versions of what is most often an LED-based item. This week’s offering is from [John Burd], who published a very odd video showing off the clock he made. But look beyond YouTuber antics and you’ll see the stepper motors he used to turn the segments are dripping with graceful beauty. (Video, embedded below.)

Okay if you want to hear [Charlie Sheen] say “Raspberry P-eye”, this is the video for you. [John] used Cameo to get the (former?) star to talk about what was used to build the clock. Like we said, the video is weird. Let’s embrace that right away and then never talk about it again.

The thing is, the build is such a good idea. [John] went with some stepper motors you can source relatively cheaply from Ali Express and the like. Typically they’re around a buck or two each and have a couple of wings for screw mounting brackets. This builds on the segment displays we’ve seen that use hobby servos by allowing you finer control of how the segments move. Sure, the 90° rotation isn’t all that much to work with, but it will be much smoother and you can get fancy with the kinematics you choose. The only place we see room for improvement is the alignment of the segments when they are turned “off” as you can see the center segment in the video thumbnail below is not quite level. Maybe a linkage mechanism would allow for a hing mechanism that aligns more accurately while hiding the servos themselves behind the mounting plate? It’s in your hands now!

In the demo video you’ll also find some interesting test rigs built to proof out the project. One just endurance tests the mechanism, but the other two envision water-actuated segments. One pumps a hollow, transparent segment with colored liquid. The other tried to use water droplets sprayed in the air to illuminate laser segments. Both are cool and we’d like to see more of the oddball approaches which remind us of the ferrofluid clock.

END_OF_DOCUMENT_TOKEN_TO_BE_REPLACED 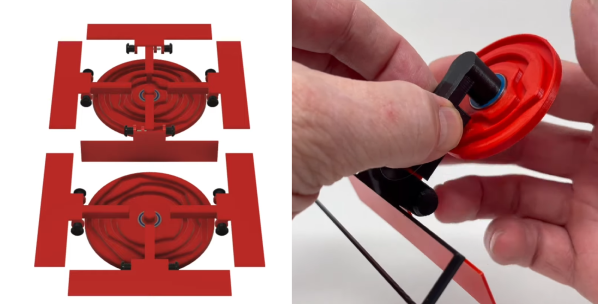 Seven-segment displays have been around for a long time, and there is a seemingly endless number of ways to build them. The latest of is a mechanical seven-segment from a master of 3D printed mechanisms, [gzumwalt], and can use a single motor to cycle through all ten possible numbers.

The trick lies in a synchronized pair of rotating discs, one for the top four segments and another for the bottom three segments. Each disc has a series of concentric cam slots to drive followers that flip the red segments in and out of view. The display can cycle through all ten states in a single rotation of the discs, so the cam paths are divided in 36° increments. [gzumwalt] has shown us a completed physical version, but judging by CAD design and working prototype of a single segment, we are pretty confident it will. While it’s not shown in the design, we suspect it will be driven by a stepper motors and synchronized with a belt or intermediate gear.

Another 3D printed mechanical display we’ve seen recently is a DIY flip dot, array, which uses the same electromagnet system as the commercial versions. [gzumwalt] has a gift for designing fascinating mechanical automatons around a single motor, including an edge avoiding robot and a magnetic fridge crawler.

END_OF_DOCUMENT_TOKEN_TO_BE_REPLACED 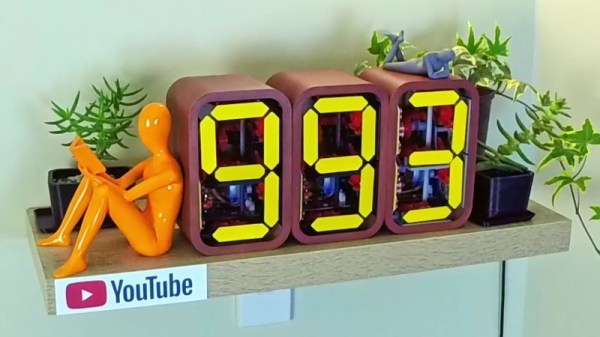 There are a variety of means by which numbers can be displayed from an electronic circuit, and probably the most ubiquitous remains the seven-segment display. Take seven LEDs, lamps, LCDs, VFD segments or mechanical flip-dot style units in the familiar rectangular figure eight, and your microcontroller or similar can display numbers. There are a variety of different interfaces, but at most all that is needed is a level shifter and a driver.

Sometimes though we encounter a completely novel 7-segment display, and such is the case with [Fhuable]’s all mechanical single digit display. It bears a superficial resemblance to a flipdot display, but instead of a magnetic actuator, it instead uses a complex system of gears and cams to flip the segments sequentially from the turning of a small crank. It appears to be the same mechanism he’s used in his subscription counter project whose video we’ve placed below the break, and it is truly a thing of beauty. We’re not entirely certain how useful it would be as a general-purpose display in its current form, however, we can see it being adapted with relative ease. A clock might, for example, be an eye-catching project.

Most displays that make it here have some electrical components, so it’s unusual to see an entirely mechanical one. But that’s not necessarily always the case.

END_OF_DOCUMENT_TOKEN_TO_BE_REPLACED 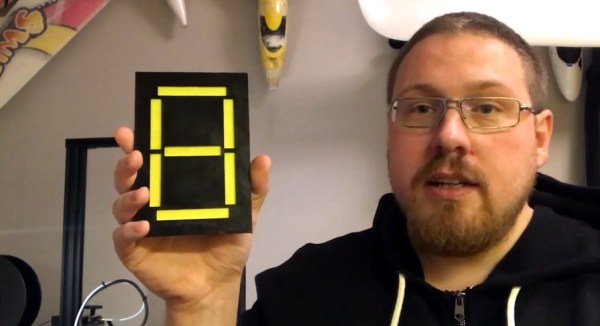 END_OF_DOCUMENT_TOKEN_TO_BE_REPLACED

This is not an LED display, it’s a thread display. The hardware artists over at Breakfast, a Brooklyn based rapid product and prototype company, built this color display that uses spools of thread for each pixel. 6,400 spools to be exact.

Pixels use long strips for the colors

Serious work went into this thing, and the results couldn’t be better. Check out the video after the break to see for yourself. The trick is to increase the surface area of the spools of thread. This is done by using the spool as a pulley which guides a 5.5 foot length of “threaded fabric”. Up close, the fabric looks as if it’s just wrapped around the wooden spool, but the extra length provides enough room for 36 different colors, each blending into the next in a gradient effect. Index the location of the fabric in each pixel system and you have a wide range of color options.

The piece was commissioned by clothing retailer Forever 21 and has even been given its own website. The display pulls Instagram photos with the #F21threadscreen hashtag and displays them. You can watch a live stream for the next week, and the dedicated site has a search feature to find a recording of your own photo by username.