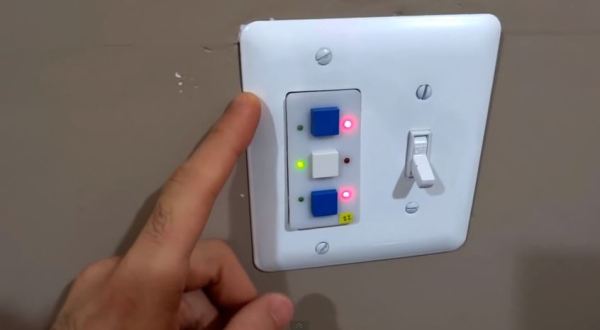 [Felix Rusu] is fast becoming a big name in home automation with his clever Moteino systems. His latest is called the SwitchMote which is a super easy way to upgrade your light switches for home automation, and he’s just released the source!

The SwitchMote is a drop in wireless light switch which lets you control a standard AC load, limited to 100W at this time. It uses a solid state relay (SSR) to perform the switching, but like any project involving mains electricity… MAKE SURE YOU KNOW WHAT YOU’RE DOING!

It makes use of a Moteino (duh) which is a wireless Arduino clone that operates over RF. We’ve seen it used before to control a Keurig coffee maker, operate a garage door over the internet, and even text you when your sump pump fails and your basement is about to flood!

Excited? Take a look at his GitHub repository, and check out how it works in the following video.

END_OF_DOCUMENT_TOKEN_TO_BE_REPLACED [Kolumkilli] loves his Keurig coffee maker, as it makes him an excellent cup of coffee, but he doesn’t like waiting for it to brew. So he set out to make it wirelessly controlled via his computer… with the press of a button, he can have his coffee ready and waiting for him when he gets up.

After carefully dismantling his Keurig, he set to locating the main buttons on the PCB, and proceeded to wire in relays in parallel to the ones he wanted to control. Throw in a Moteino and add the notification LEDs as inputs as well and now he can control and monitor almost all the coffee maker’s functions via a web browser at his desk. Now if only he could remember to put a new coffee cup in…

There’s a great writeup on the forum post, so if you want to see a more detailed build log, check it out! And if you’re looking to add even more functionality to your Keurig, why not run a waterline to it?