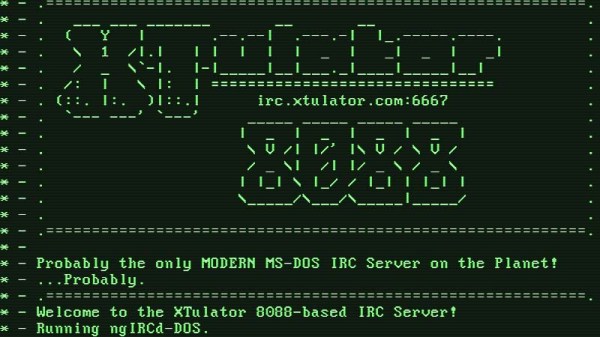 The recent flurry of projects based around Internet Relay Chat (IRC) should be a fair indication that the beloved protocol is not going anywhere. Now, thanks to [Mike Chambers], you can add to the IRC ecosystem by hosting your very own MS-DOS based IRC server.

This port of ngIRCd (Next Generation IRC Daemon) has already been spun up on 8088-based PCs running at just 4.77MHz, but you’ll still need at least 640KB of RAM. If your vintage IRC server takes off, you might want to think about dropping in an 10MHz V20 for a bit of a performance boost. Even so, it’s impressive that this server can get up on the 40-year-old IBM 5150, and should absolutely scream on an AT-class system.

The limitations of the 16-bit platform means that SSL and ZLIB are unsupported, and Mike has capped total connections at 50 in his port (however, this limitation can be adjusted by rebuilding from source, should you want to find out how far 640KB of RAM can take you). You’ll also need a few other things to get your server up and running, such as a packet driver for your network card and an mTCP configuration file.

Setting up your own IRC server is arguably a rite of passage for most hackers and tinkerers, but getting this up and running on a decades-old beige box would make for a fun weekend project. [Mike] has all the juicy details on GitHub, and you can check out a test server running the latest build over at irc.xtulator.com.

Also, don’t forget to visit the #hackaday IRC channel over on irc.libera.chat.

[Thanks Sudos for the hot tip] 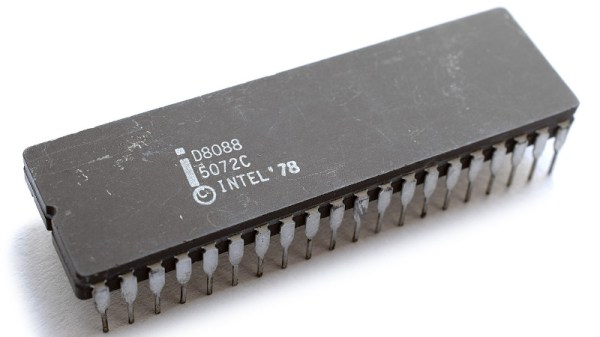 “Bring our home computing out of the 1970s and into the 1980s and beyond” is the irresistible promise made by the creator of 8088ify, a piece of software which translates CP/M executables from their 8080-based originals to assembler code that should run on an 8088 under MS/DOS. How can we resist such a futuristic promise here in 2021, even though the code wasn’t written to the sound of Donna Summer or the Village People back in the day but here in 2021 for PCjam, a celebration of the original IBM PC’s 40th anniversary.

As the writer of this code [ibara] points out that Intel intended the 8088 to be a ready upgrade path for the 8080, and designed its instruction set while not directly compatible, to make translation between the two a straightforward process. There was commercial software for the task at the time, but to this day there remained nothing with an open-source licence. It’s written in ANSI C for portability across platforms and compilers, and can even be compiled under CP/M itself.

PCjam is well worth a look, and if any of you fancy a go at writing for the earliest MS-DOS machines we’d like to suggest you create something for it. Meanwhile if you’d like to explore CP/M, you can run a bare metal emulator on the Raspberry Pi.

END_OF_DOCUMENT_TOKEN_TO_BE_REPLACED 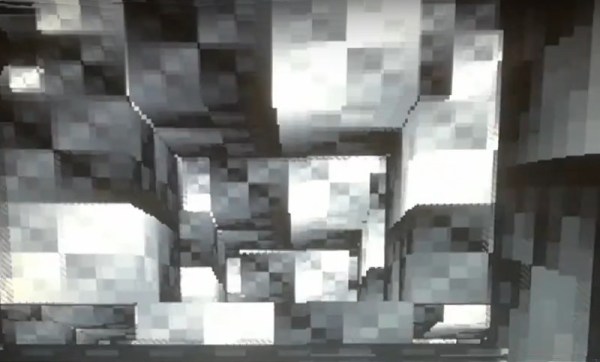 Throughout human history, people try to make the biggest, the fastest, and — sometimes — the smallest. [Hellmood] falls into the latter category and proves it with a 64 byte interactive 3D raycasting application for MSDOS.

Why MSDOS? We suppose why not? The .COM file format is lean, and you can take over everything without a lot of work. If the program were huge, it wouldn’t be very impressive. There are 64 shades of gray which is odd looking these days, however there are versions that use various color palettes and each one fits in 64 bytes or less. There’s even mouse control and you can see the results in the video below.

END_OF_DOCUMENT_TOKEN_TO_BE_REPLACED 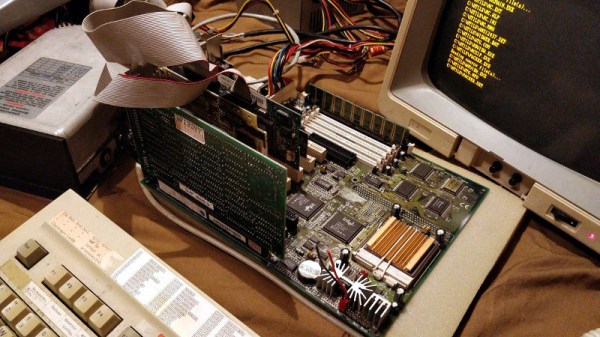 Even if you aren’t a vintage computer aficionado, you’re probably aware that older computer hard drives were massive and didn’t hold much data. Imagine a drive that weighs several pounds, and only holds 1/1000th of what today’s cheapest USB flash drives can. But what you might not realize is that if you go back long enough, the drives didn’t just have lower capacity, they utilized fundamentally different technology and relied on protocols which are today little more than historical footnotes. 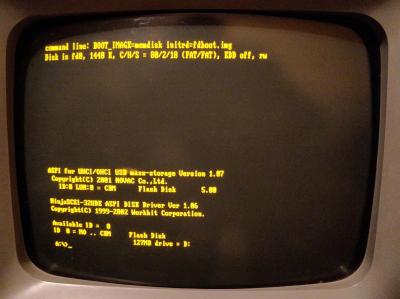 A case in point is the circa 1984 Modified Frequency Modulation (MFM) drive which [Michał Słomkowski] was tasked with recovering some files from. You can’t just pop this beast into a USB enclosure; copying files from it required an interesting trip down computing’s memory lane, with a sprinkling of modern techniques that are sure to delight hackers who still like to dip their toes into the MS-DOS waters from time to time.

The drive, a MiniScribe 2012, has its own WD1002A-WX1 8-bit ISA controller card. [Michał] is the kind of guy who just so happens to have an ISA-compatible AT motherboard laying around, but he didn’t have the correct cooler for its Pentium processor. He stuck a random heatsink down onto it with a rubber band and set the clock speed as low as possible, which worked well enough to get him through the copying process.

Not wanting to fiddle with floppies, [Michał] then put together a setup which would let him PXE boot MS-DOS 6.22 under Arch Linux. He used PXELINUX, part of the syslinux package, and created an entry for DOS in the configuration file under the pxelinux.cfg directory. He then installed netboot which combines a DHCP and TFTP server into one simple package, and configured it for the MAC address of the AT machine’s 3com 3C905C-TXM network card.

With the hardware and operating system up and running, it was just a matter of getting the files off of the MFM drive and onto something a bit more contemporary. He tried to copy them to a secondary IDE drive, but it seemed there was some kind of conflict as both drives wouldn’t operate at the same time. So he pulled another solution from his bag of tricks: using a USB mass storage device on MS-DOS. By emulating a SCSI drive, he was able to get a standard flash drive plugged into a PCI USB card working, which ultimately dragged these ~35 year old files kicking and screaming into the 21st century.

We love keeping old hardware alive here at Hackaday, and documented methods to not only PXE boot DOS but use USB storage devices when you get it up and running will hopefully inspire some more hackers to blow the dust off that old 386 in the attic.

If you look back 30 or so years ago, it wasn’t clear what was going to happen with personal computers. One thing most people would have bet on, though, was that CP/M — the operating system from Digital Research — would keep growing and power whatever new machines were available. Except it didn’t. MS-DOS took over the word and led — eventually — to the huge number of Windows computers we know today. Microsoft has released the source code to MS-DOS 1.25 and 2.0 on GitHub.

Microsoft — then another fledgling computer company — had written some BASIC interpreters and wanted in on the operating system space. They paid the princely sum of $75,000 to Seattle Computer Products for something called QDOS written by [Tim Paterson]. Rebranded as MS-DOS, the first version appeared in late 1981 and version 1.25 was out about a year later.

While you might not think having MS-DOS source code is a big deal, there’s still a lot of life left in DOS and it is also interesting from an educational and historical perspective. If you don’t want to read x86 assembly language, there’s also the BASIC source for the samples (paradoxically, in the bin subdirectory) along with compiled COM files for old friends like EDLIN and DEBUG.

END_OF_DOCUMENT_TOKEN_TO_BE_REPLACED 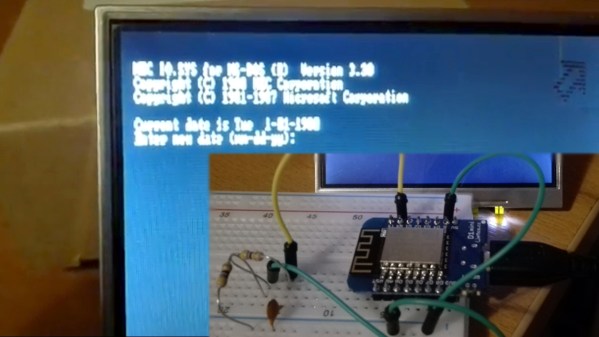 Do you remember the simpler times when you had a DOS command line, a handful of commands, and you talked to the hardware through a few BIOS and DOS interrupts? Okay, maybe it was a little limited, but nostalgia doesn’t care. Now [mcuhacker] is working on bringing some of those memories back by getting a PC-XT emulator running on an ESP8266.

For the x86 CPU emulator, he ported Fake86 which is written in C, and created an Arduino IDE environment for it. The MS-DOS 3.3 bootdisk image is stored in flash and is accessed as the A: drive. There’s no keyboard yet but he has 640×200 CGA working with 80×25 characters on a 3.5″ TFT display with the help of a low pass filter circuit. In the video below he shows it booting to the point where it asks for the date.