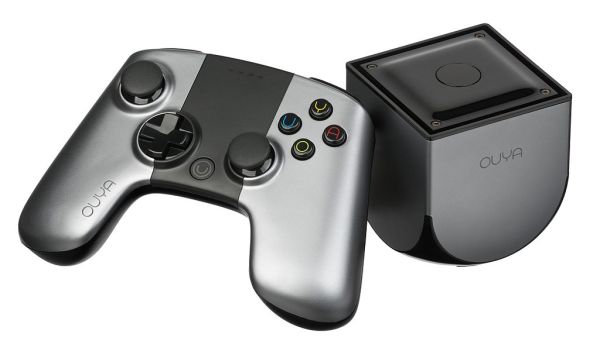 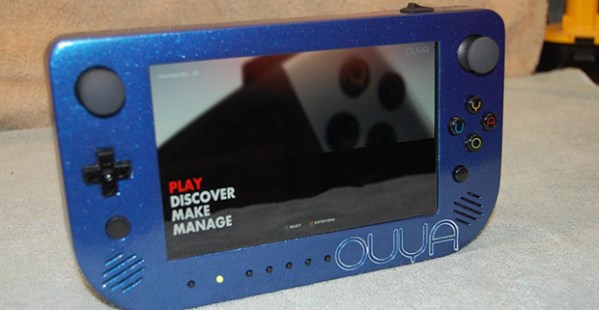 We’ve seen a few of [Downing]’s portabalized console builds before, but this one is his first build in over two years. That’s a lot of time, and since then he’s picked up a lot of great fabrication techniques, making this one of the best looking portables we’ve ever seen. It’s a repackaging of an Ouya, but we won’t hold that against him, it’s still an amazing piece of work.

In the build log, [Downing] started off this build by using a 3D printed enclosure, carefully milled, filled, and painted to become one of the best one-off console repackagings we’ve ever seen. The speaker and button cutouts were milled out, and an amazing backlit Ouya logo completes the front.

Stuffing the Ouya controller inside a case with a screen, battery, and the console itself presented a challenge: there is no wired Ouya controller. Everything is over Bluetooth. Luckily, the Bluetooth module inside each controller can be desoldered, and slapped on a small breakout board that’s stuffed in the case.

It’s a great build, and in [Downing]’s defense, the Ouya is kinda a cool idea. An idea much better suited to a handheld device, anyway. Videos below.

END_OF_DOCUMENT_TOKEN_TO_BE_REPLACED

Wanting to display his Google calendars [Chris Champion] decided to mount an old monitor on the wall. The hack is his installation method which recesses both the bracket and the outlet while still following electrical code (we think).

Since we’re already on the topic. Here’s a hack-tacular project which hangs a laptop LCD as if it were a picture frame. We do really enjoy seeing the wire, which connects to the top corners and hangs from a single hook a few inches above the screen bezel. There’s something very “whatever works” about it that pleases us.

[Jaspreet] build a datalogger in an FPGA. He put together a short video demo of the project but you can find a bit more info from his repo. He’s using a DE0-Nano board which is a relatively low-cost dev board from Terasic.

Want to see what’s under the hood in the processor running a Nintendo 3DS? Who wouldn’t? [Markus] didn’t just post the die images taken through his microscope. He documented the entire disassembly and decapping process. Maybe we should have given this one its own feature?

If you’re streaming on your Ouya you definitely want a clean WiFi signal. [Michael Thompson] managed to improve his reception by adding an external antenna.

We always like to hear about the free exchange of information, especially when it comes to high-quality educational material. [Capt Todd Branchflower] teaches at the United States Air Force Academy. He wrote in to say that his ECE383 Embedded Systems II class is now available online. All the info can also be found at his Github repo.

And finally, do you remember all the noise that was made about 3D printed guns a while back? Well [Mikeasaurus] put together the .iStab. It’s a 3D printed iPhone case with an integrated folding blade…. for personal protection? Who knows. We think it should be a multitasking solution that functions as a fold-down antenna.

The race is on to squeeze cycles out of an 8MHz AVR chip in order to better drive the WS2811 LED protocol.

[Asher] doesn’t want to buy charcoal aquarium filters if he can just build them himself. He filled a couple of plastic drink bottles with charcoal, cut slots in the sides, and hooked them up to his pump system. A gallery of his work is available after the break.

Is the best way to make microscopic sized batteries to 3d print them? Harvard researchers think so. [Thanks Jonathan and Itay]

The Ouya gaming console is now available for the general public. [Hunter Davis] reports that the Retrode works with Ouya out-of-the-box. If you don’t remember hearing about it, Retrode reads your original cartridge ROMs for use with emulators.

Making a cluster computer out of 300 Raspberry Pi boards sounds like a nightmare. Organization is the key to this project.

A Kelvin clips is a type of crocodile clip that has the two jaws insulated from each other. [Kaushlesh] came up with a way to turn them into tweezer probes.

END_OF_DOCUMENT_TOKEN_TO_BE_REPLACED

With the explosion of mobile gaming (due in no small part to the egg-bombing Angry Birds), the Ouya was bound to happen. It’s a $100 game console powered by Android that puts indie games right into your living room.

The specs for the Ouya means this cube of games isn’t a slouch: the console comes loaded with an NVIDIA Terga3 quad-core processor, 1 GB of RAM, 8 Gigs of flash storage, HDMI, WiFi, Bluetooth, and Android 4.0. A requirement for publishing games on the Ouya is making at least some of the game free to play, a la TF2 or LoL. In addition to being a video game console, Ouya will also pull down Twitch.TV streams allowing you to watch Starcraft championships and other e-sports on your big-screen TV.

Not only does the Ouya play games, its designers made the device easily hackable. There aren’t enough details to know exactly what this means, but we’re sure we’ll see a full-blown Linux distro running on the Ouya within a week of release.

As of this writing, the Ouya Kickstarter has already met their funding goal of $950,000 by taking  a freaking ton of money with 29 days left. This might become the most successful Kickstarter to date, and we can’t wait to see all the neat stuff and hacks for the Ouya in the near future.