Global supply chain issues are beginning to hit closer to home for the hacker community, as Raspberry Pi has announced their first-ever price increase on their flagship Pi 4. The move essentially undoes the price drop on the 2GB version of the Pi 4 that was announced in February, and sets the price back up from $35 to $45. Also rolled back is the discontinuation of the 1GB version, which will now be available at the $35 price point. The announcements come from Eben Upton himself, who insists the price increase is only temporary. We applaud his optimism, but take it with a grain of salt since he also said that 2021 production across the board will stay at the seven million-unit level, which is what they produced in 2020. That seems to speak to deeper issues within the supply chain, but more immediately, it’s likely that the supply of Pi products will be pinched enough that you’ll end up paying above sticker price just to get the boards you need. Hope everyone is stocked up.

On the topic of supply chain issues and their threat to Christmas gift-giving, here’s one product we hope is stranded in a container off Long Beach or better still, bobbing along in the Strait of Juan De Fuca: a toddler’s toy telephone that actually makes and receives calls. Anyone born in the last 60 years probably had one of the Fisher-Price Chatter telephone, a toy that in its original form looked like a desk telephone on wheels that was dragged behind the child, popping along and providing endless hours of clicky amusement as kids twisted the dial and lifted the receiver. Come to think of it, the Chatter telephone may be as close to a dial phone as anyone born since 1990 may have come. Anyway, some genius stuck a Bluetooth module into the classic phone to let it hook up to an app on an actual phone, allowing kids (or more likely their nostalgia-soaked parents) to make and receive calls. It’s actually priced at a reasonable $60, so there might be some hacking potential here.

Also tangential to supply chains, we stumbled across a video guide to buying steel that might interest readers. Anyone who has seen the displays of steel and other metals at the usual big-box retailers might wonder what the fuss is, but buying steel that way or ordering online is a great way to bust a project’s budget. Fabricator and artist Doug Boyd insists that finding a local steel supplier is the best bang for your buck, and has a bunch of helpful tips for not sounding like a casual when you’re ordering. It’s all good advice, and would have helped us from looking foolish a time or two at the metal yard; just knowing that pipe is measured by inside diameter while tubing is measured by outside dimensions is worth the price of admission alone.

With all the money you save on steel and by not buying Raspberry Pis, perhaps you’ll have a couple of hundred thousand Euros lying around to bid on this authentic 1957 Sputnik I satellite. The full-scale model of Earth’s first artificial satellite — manhole covers excluded — was a non-flown test article, but externally faithful to the flown hardware that kicked off the first Space Race. The prospectus says that it has a transmitter and a “modern power supply”; it’s not clear if the transmitter was originally part of the test article or added later. The opening bid is €85,000 and is expected to climb considerably.

And finally, there’s something fascinating about “spy radios,” especially those from the Cold War era and before, when being caught with one in your possession was probably going to turn out to be a very bad day. One such radio is the Radio Orange “Acorn” receiver, which is in the collection of the Crypto Museum. The radio was used by the Dutch government to transmit news and information into the occupied Netherlands from their exile in London. Built to pass for a jewelry box, the case for the radio was made from an old cigar box and is a marvel of 1940s miniaturization. The radio used three acorn-style vacuum tubes and was powered by mains current; another version of the Radio Orange receiver was powered by a bike dynamo or even a water-powered turbine, which could be run from a tap or garden hose. The video below shows the water-powered version in action, but the racket it made must have been problematic for its users, especially given the stakes.

END_OF_DOCUMENT_TOKEN_TO_BE_REPLACED 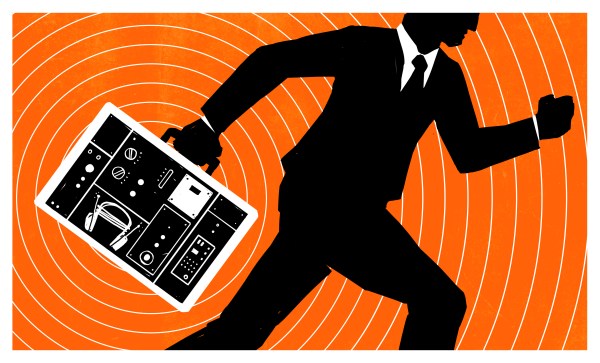 World War II can be thought of as the first electronic war. Radio technology was firmly established commercially by the late 1930s and poised to make huge contributions to the prosecution of the war on all sides. Radio was rapidly adopted into the battlefield, which led to advancements in miniaturization and ruggedization of previously bulky and fragile vacuum tube gear. Radios were soon being used for everything from coordinating battlefield units to detonating anti-aircraft artillery shells.

But it was not just the battlefields of WWII that benefitted from radio technology. From apartments in Berlin to farmhouses in France, covert agents toiled away over sophisticated transceivers, keying in coded messages and listening for instructions. Spy radios were key clandestine assets, both during the war and later during the Cold War. END_OF_DOCUMENT_TOKEN_TO_BE_REPLACED