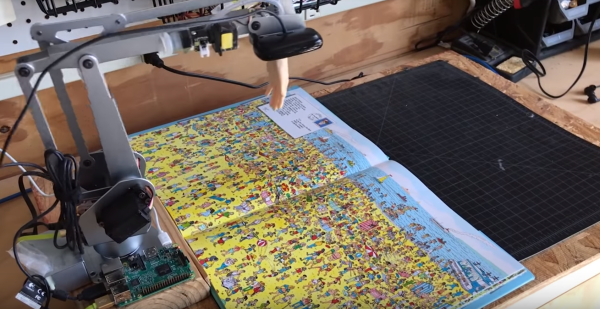 The last few weeks have seen a number of tech sites reporting on a robot which can find and point out Waldo in those “Where’s Waldo” books. Designed and built by Redpepper, an ad agency. The robot arm is a UARM Metal, with a Raspberry Pi controlling the show.

A Logitech c525 webcam captures images, which are processed by the Pi with OpenCV, then sent to Google’s cloud-based AutoML Vision service. AutoML is trained with numerous images of Waldo, which are used to attempt a pattern match.  If a pattern is found, the coordinates are fed to PYUARM, and the UARM will literally point Waldo out.

While this is a totally plausible project, we have to admit a few things caught our jaundiced eye. The Logitech c525 has a field of view (FOV) of 69°. While we don’t have dimensions of the UARM Metal, it looks like the camera is less than a foot in the air. Amazon states that “Where’s Waldo Delux Edition” is 10″ x 0.2″ x 12.5″ inches. That means the open book will be 10″ x 25″. The robot is going to have a hard time imaging a surface that large in a single image. What’s more, the c525 is a 720p camera, so there isn’t a whole lot of pixel density to pattern match. Finally, there’s the rubber hand the robot uses to point out Waldo. Wouldn’t that hand block at least some of the camera’s view to the left?

We’re not going to jump out and call this one fake just yet — it is entirely possible that the robot took a mosaic of images and used that to pattern match. Redpepper may have used a bit of movie magic to make the process more interesting. What do you think? Let us know down in the comments! When you think of a robotic arm, you’re probably thinking about digital control, microcontrollers, motor drivers, and possibly a feedback loop. Anyone who was lucky enough to have an Armatron knows this isn’t the case, but you’d still be surprised at how minimal a robotic arm can be.

The robotic arm is actually configured more like a Waldo with a master slave configuration. [viswesh] built a second arm with pots at the hinges, with the resistance of the pots controlling the signal output from a 556 dual timer chip. It’s extremely clever, at least until you realize this is how very early robotic actuators were controlled. Still, an impressive display of what can be done with a simple 555. Videos below.

END_OF_DOCUMENT_TOKEN_TO_BE_REPLACED

After working on the DARPA Virtual Robotics Challenge this summer, visions of a Heinlenesque robotic actuator filled [Hunter]’s head. His lab had access to something called a Cyberglove that used flexible pots in each of the fingers, but each of these gloves cost the lab $15,000 each.

With a little help from some joystick potentiometers, [Hunter] whipped up a decent approximation of a $15,000 device that measures how much a user’s fingers are bent. The pots are tied into an Arduino and read with analogRead(), while a small Python script interprets the data for whatever application [Hunter] can imagine.

There are a few drawbacks to [Hunter]’s design – it’s not wireless, unlike the $15,000 version, and they certainly don’t look as cool as the real thing. Then again, the DIY version only cost 0.2% as much as the real deal, so we’ll let any apparent problems slide for now.

Robot enthusiast [Vitalijus Rodnovas] built this rig to allow a humanoid robot to mimic his own body movements in real time. [Rodonovas] refers to his man-machine interface as a “master-slave suit,” but elsewhere this is often called a waldo after a prescient 1942 [Robert Heinlein] novella. This project page is slight on details and is mostly written in his native Lithuanian, but the pictures speak volumes, and with a little help from Google Translate we can learn the essential facts: The robot itself is a commercially-available kit, the Kondo KHR-1HV from Japan. The custom-built harness uses a collection of surplus Soviet-era military potentiometers (acquired on eBay) to read the positions of his elbows and shoulders, then an ATmega8-based interface board translates these readings into motion commands sent to the robot’s onboard controller. Some additional notes and code can be found on the RoboSavvy Forum.

Does it work? Just watch. His grin as the video progresses is infectious!

Hack a Day has previously covered other Waldos, but this latest deserves style points for its lightweight simplicity.