The Alex eReader has been rooted. This little handheld was the belle of the ball at CES 2010 when it came to eReaders. Now that is has been released into the wild it takes its place next to the heavy hitters that have already seen root access. If you’re unfamiliar, this device boasts a six-inch e-ink display and a 320×240 LCD touchscreen interface. Now that you can make it do your bidding, what are your plans for the $350 tablet? Let us know in the comments.

Apod walks!  If you recall, last year we discovered Apod, the creepy lifelike hexapod creation made by [Zenta]. At that point in time, it basically just shifted around nicely but didn’t do much walking. Well, [Zenta] has been hard at work since then and now Apod is fully active, walking, running, and serving drinks with smooth motion. Want to learn more about how his inverse kinematics work? Check out this thread. If you can fabricate single-sided circuit boards at home you can build this digital oscilloscope. It uses mostly through-hole components with just a couple of surface mount chips to contend with. An ATmega162 handles the hardware end of things with a CPLD used to manage the sampling rate. Data is displayed on a 240×128 LCD display which will be the most expensive component to acquire. It’s still a lot cheaper than buying a commercially available oscilloscope, even if you get a base model and hack it to unlock all the features. [Sprite_tm] dusted off his assembly skills and managed to emulate a Z80 computer using an AVR ATmega88. He’s using an SD card in place of the floppy and a 128 KB DRAM chip to handle the memory for the emulated machine. An FT232 board gives him terminal access which he uses for input and display. As you can see, the hardware is much simpler than building the original would have been. He makes up for this with complicated firmware. In the end, the emulated core occupies about 2 KB of programming space after he followed the Z80 Propeller project’s idea of dividing the instructions into different modules and using a lookup table to access them. 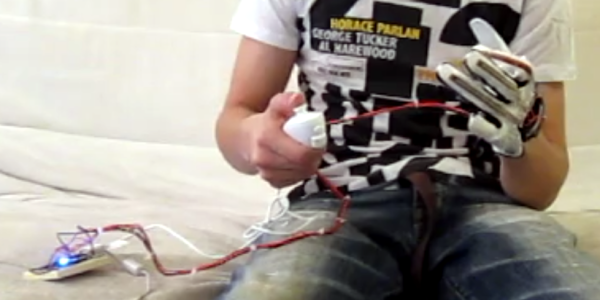 [Shu Uesugi] is filling a controller void that Nintendo has yet to address. He picked up a golf glove from Target and incorporated it into an air guitar interface. Give the video after the break a chance, you’ll start to see the full potential of this build about three and a half minutes into it. Using an Arduino, a Wii nun-chuck, and his flex-senor adorned glove [Shu] can play individual notes, strum cords, and play around with sound effects such as distortion.

So come on Nintendo, the Power Glove was one of your greatest ideas, where’s our 21st century version? I guess we’ll just have to make our own like [Shu] did. Perhaps we’ll even build our flex sensors from scratch.

END_OF_DOCUMENT_TOKEN_TO_BE_REPLACED [Torx] wrote this instructable on how to convert a lawnmower to another useful tool.  We’re not sure what language he natively speaks, but we doubt it is english, so you might be better off just looking at the pictures to figure out what he’s doing.  To summarize, he has lowered the mower and reversed/bent the blade to scrape the ground. He has also added thick rubber edges all around to try to keep debris from coming out. You might be wondering why he would need something like this, but the last page sums it up pretty well. We could imagine this possibly getting some use in the garden as well. This one does look pretty dangerous though, so don’t blame us if you cut off a hand or lose an eye to some debris. Then again, a regular lawnmower looks pretty dangerous too. The IEE clock looks somewhat un remarkable at first glance. Upon closer inspection though, you’ll find out that there are 12 light bulbs crammed in there for each digit. The bulbs sit behind a curved lens with the numerals on it. When the appropriate one is lit, it projects the number on the front of the clock. While it isn’t new, it is certainly new to us. It is also interesting that you set the time by rotating the little dial on the top right. While it may be easier to set the time that way, it seems that it would be prone to getting nudged on accident.