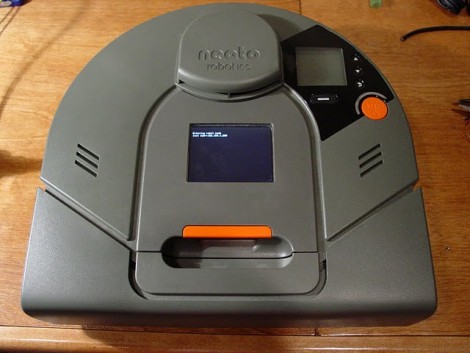 So you bought yourself a Neato XV-11 and your floors have never been cleaner. The only problem is that you want to hack around with the hardware without losing your floor-sweeping minion. [Hash] found a solution to the issue by building a computer inside of the dustbin module.

You can see at the center of the image above a touchscreen. Normally this is just blank plastic, as it’s the removable container where your floor sweepings go, but [Hash] was inspired by the modular design. Since that bin is intended to be removable, it’s a perfect way to make add-on hardware removable. All he needed to do was find a way to connect to the Neato’s own electronics. The solution was a non-standard USB cable.

Using the guts from an Insignia Infocast 3.5 (he picked several of them up on clearance at Christmas) he  milled an opening for the touch screen, added a cooling fan, and wired up a toggle switch (not pictured above) which powers everything from the 14-17V coming in from that USB cable. The Infocast is a Chumby with a different branding so there’s plenty of Linux-based power and it’s WiFi enabled. Watch [Hash’s] walk through video after the break to see all that went into this clever concept.

We haven’t seen too many hacks that make use of the Neato XV-11. [Hash] is the same guy who hacked the Lidar on the unit, but there must be others turning out impressive projects. Don’t hesitate to send in a tip if you know of one.

END_OF_DOCUMENT_TOKEN_TO_BE_REPLACED END_OF_DOCUMENT_TOKEN_TO_BE_REPLACED

[Eric] needed a project for his digital logic design class, and decided on a lock that open in response to a specific pattern of knocks. This is a fairly common project that we’ve seen a few builds with ‘knock locks,’ but this one doesn’t use a microcontroller. Instead, it uses individual logic chips.

The lock senses the knocks with a piezo, just like every other build we’ve seen. Unlike the other builds, the knock pattern is then digitized and stored in an EEPROM. [Eric] only used 12 chip for this build, a feat he could accomplish with a few digital tricks, like making an inverter by tying one XOR input high.

We’ve seen a 555-based knock lock before, but getting the timing right with that seems a little maddening. [Eric]’s build seems much more user-friendly, and has the added bonus of being programmed by knocking instead of turning potentiometers. Check out [Eric]’s knock lock after the break.

END_OF_DOCUMENT_TOKEN_TO_BE_REPLACED [Snypercat] makes no bones about the fact that she despises rats, and does everything in her power to keep them off her farm. We can’t blame her though – they spread disease, eat other animals’ food, and can get your farm shut down if there are too many running about. While most of us might hire an exterminator or set out a ton of traps, she chooses to take a far more hands-on approach, hunting down each and every one of those little buggers with an air rifle.

If you’ve ever gone rat hunting in the dark (and who hasn’t?), you know that it can be difficult to aim in the dead of night. Night vision scopes can be expensive, but [Snypercat] shows how you can make your own scope that gives you the added benefit of recording your kills along the way. She happened to have a Sony camcorder with built-in night vision capabilities, and with a bit of tweaking she was able to mount it on her rifle’s scope. An IR flashlight was mounted on the rifle as well, giving her enhanced visibility without spooking her prey.

Be sure to check out the pair of videos below to see how [Snypercat] attached the camcorder to the scope, along with how well it works in the field.

END_OF_DOCUMENT_TOKEN_TO_BE_REPLACED Reader [Xellers] sent in his newest instructable: DIY Electron Accelerator: A Cathode Ray Tube in a Wine Bottle. While not exactly what you might think of a cathode ray tube, the basics are in place. A wine bottle is used as a vacuum chamber and a 9kv neon transformer is attached to a stopped in the top. A cathode is placed mid way, the air is sucked out with a pump, and high voltage is applied.

Naturally as more air gets pumped out the electric arc intensifies into a pretty solid plasma filling the space between the two contacts. While mixing drilled glass with a vacuum and high voltage sounds like an awesome hospital story [Xellers] does cover some safety points including the possibility of this thing putting out some nasty waves.

One thing that is not mentioned (that I saw)  is this is very similar to how florescent light tubes work and without florescent material lining the chamber it will spit out quite a bit of UV light (notice germicidal UV lights are clear). So you will want to watch your eyes!

END_OF_DOCUMENT_TOKEN_TO_BE_REPLACED We’re all familiar with IVRS systems that let you access information using a touch-tone telephone. [Achu Wilso] built his own version which uses a cellphone, microcontroller, and computer.

The cellphone is monitored by an LM324 op-amp with an attached 555 timer chip. When a call comes in the voltage on the headphone output goes high, activating the timer circuit. If it goes low and does not go high again for about 25 seconds the call will be ended. Each incoming touch tone acts as a keepalive for the circuit.

An MT8870 DTMF (touch tone) decoder chip monitors the user input. An ATmega8 microcontroller grabs the decoded touch tones from that chip, and pushes them to a PC via USB. The PC-side software is written in Python, using MySQL bindings to access database information. eSpeak, the open source speech synthesizer software is used to read menu and database information back to the caller.

Not a bad little system, we wish there was an audio clip so we could hear it in action. [Evan Flint] and his wife use a lot of online recipes in the kitchen. Rather than printing them out, they bought an iPad as a cooking companion. But in their cramped kitchen he needed to find a place for the high-end hardware that is out-of-the-way yet accessible. Some head scratching and parts bin diving led to this under-cabinet iPod dock.

The dock itself is a cradle made out of sheet aluminum. After cutting to shape, [Evan] bent up the sides and bottom to center the iPad. Since this is not a permanent fixture he needed to make the cradle collapsible. He used a CAD program to design the base tray to let the cradle lay flat, while giving several options to the angle when it is in use. Once the cooking is done just fold it up and the drawer slides make for easy under-cabinet storage.

Because he doesn’t own the house he didn’t want to make permanent alterations to the cabinet. But he does lament the unfinished look of the drawer slides. We’d just grab some pre-finished oak crown molding from the home store and wrap the entire thing. The left-edge of molding could slide out with the cradle when in use.