We don’t have much personal experience with DOF hardware, but this Arduino library which reads and compensates for three-axis magnetometer and accelerometer data looks very impressive. It should work for existing hardware, but there’s also a demo design using a Honeywell HMC5883L compass and a Freescale MMA8453Q accelerometer which you can build yourself. Unfortunately these come in QFN packages (like most cheap accelerometers these days) so you may need to be creative when soldering.

What’s so special about this library? Watch the video after the break (use 720p in fullscreen to get the full effect) and you’ll see three different scatter plots of the output data. The image above is a capture of the third example, which is using the hard iron offset and accelerometer compensation. That is to say, metal on and around the board is accounted for, as well as the physical orientation of the device. Even if you have no prior experience with this type of hardware it’s easy to see the usefulness of this kind of software compensation.

END_OF_DOCUMENT_TOKEN_TO_BE_REPLACED [Quinn Dunki] just reported in on the latest iteration in her computer project which is called Veronica. This time she added RAM to increase the VGA performance of her build. Like just about every other part of the project, [Quinn] knew what she wanted to do, but had to overcome a lot of issues along the way.

The goal is to implement a 256×240 display with 8-bit color depth. [Quinn] says this is on par with game console technology from the 1980’s. The problem is that the 10MHz AVR controller can’t really keep up with the scan rate of this size of display. The answer is to add RAM which stores all of the color data, the microcontroller will simply advance the address pointer on the memory chips to match the sync rate of the VGA output.

After hooking up her hardware design she gets a screen full of uninitialized pixel data. But moving from there to the final product seen above was quite frustrating. It turns out that noise on the breadboard was most of the problem, further compounded by entire breadboard row which wasn’t contacting the wires to make the temporary connections. A bit of jockeying for position and by Jove, she’s got a boot screen.

That breadboard sure has become crowded since her first VGA experiments. 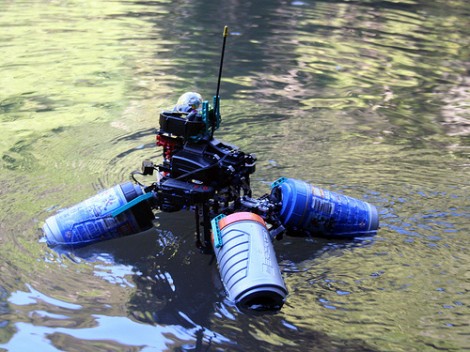 This Lego watercraft uses drinking bottles as pontoons arranged in a pattern that make it look very much like a Water Strider, the insects that dance on the surface of a lake.

After the break you can see a video of the rig gracefully navigating a local pond, along with a raft of ducks. It’s quiet enough not to startle them, which is nice. We don’t get a good look at the propulsion system, but [Vimal Patel] calls the floats “hockey bottles” in his Flickr comments. They appear to be Lego themed and we’re wondering if they are some type of packaging for a small set that doubles as a sports drinking bottle once the pieces are removed? The rig includes a camera which provides a great persepcive very near the water level.

This isn’t his only floating creation. He’s got a second rig that was used to film some of the footage of this one.

END_OF_DOCUMENT_TOKEN_TO_BE_REPLACED Maybe it was a language barrier he ran into, or possibly an inclination to do things the hard and smart way, but we really like [Alessio]’s take on building the display for his word clock. Instead of relying on a pre-designed word layout, he made his own word pattern with a genetic algorithm.

While looking at other word clock builds on the Internet, [Alessio] noticed all the DIY copies used the same pattern of letters as the original QLOCKTWO word clock. There are obvious reasons for this, laziness chief among them, but [Alessio] decided to do one better. Armed with JGAP, he made a 10×10 German language word clock and a 11×11 English language word clock.

[Alessio]’s algorithm takes a list of regular expressions – ‘five past four’ and ‘four five’ are both valid expressions for 4:05 – and combines solutions together for a hopefully optimal solution. One added bonus of [Alessio]’s method is the ability to generate non-square word clocks. On his project page, [Alessio] put up examples for round, triangular, and diamond-shaped word clocks. It’s surprising what lengths people will go to in order to bring functionality to their smart phones. In this case, [Tadpol] wanted a way to develop for his Arduino on an iOS device like an iPad or iPhone. He figures it’s possible to rewrite the IDE as HTML5, but since that’s a pretty large mountain to climb, he started by building a browser-based AVR compiler. It’s an interesting concept, and he’s got a working prototype up on Github for you to test. Perhaps you can throw your hat in the ring and help him with development?

The web interface uses boxes to add to the code. What you see above is three sets of commands which will blink an LED. The project, named Avrian Jump, uses a simple ladder language to feed the compiler, with several different options for output. The most interesting in our mind is a WAV file which can be used to program an AVR from the audio out of your device. That would make programming as simple as connecting the specially modified AVR to your headphone jack. There’s also an ASCII output which allows you to save your programs for later alteration, S19 output for AVRdude programming, and an assembler output for debugging purposes. It’s hard to see where this project might go, but we have to admit that the concept is intriguing.