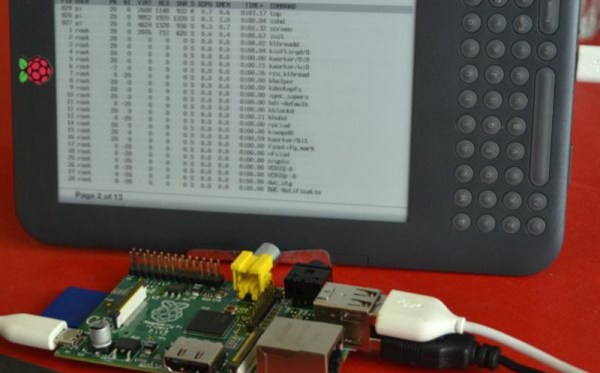 Do you think you could travel for the entire summer and leave your laptop at home? [Gef] did just that. With the help of his Kindle he used a Raspberry Pi as his travel computer. This was an easy association to think up, since he planned to bring the Kindle along as his reading material anyway. All it was going to take was some creative hacking to get it working as a display for the single-board computer.

The Kindle is merely connecting to the Raspberry Pi through a terminal emulator. This happens via USB, and requires that you Jailbreak the kindle and install a package called USBnetwork. The problem with the technique is that you’re going to go crazy trying to use the tiny keyboard that is built into the eBook reader. [Gef] decided to take a USB keyboard along with him, but how is he going to use it to control the terminal screen on the Kindle? The answer is the ‘screen’ application. We’ve used it a lot to keep programs running on a machine after we’ve exited from an SSH session. It turns out it can also be used to host multiple users on the same terminal session. Pretty neat!

Lowe’s, the home improvement big box store, is selling some home automation items which might be Xbee compatible. They’re being sold under the brand name Iris. There is some debate as to whether they’re Xbee, or just 802.15.4 hardware. Either way they might be worth checking out for your wireless projects.

Sometimes its just fun to watch the master at work. In this case it’s a blacksmith replicating the sword from Conan the Barbarian. [via Reddit]

LG has built an interesting troubleshooting feature into some of their washing machines. This video shows the encoded audio it will output if you use the right button combination. You’re supposed to hold your phone up to the machine while talking to customer service and they’ll be able to get some type of debugging information from the dial-up modem type of sounds. If you end up decoding this audio we want to know about it! [Thanks Pedro]

[TopHatHacker] was surprised to see a full-sized SD card slot on the Raspberry Pi. His temporary solution to get his microSD card working was to uses a miniSD adapter. He cut away the case and bent the pins until they lined up with the microSD card.

Okay, we think this Batman cowl in the style of 1950’s motorcycle garb is pretty cool. Just realize that if you’re seen wearing this you will be thought of as one of the crazy guys in town. [via BoingBoing] There are so many good ideas crammed into this project its hard for us to believe this isn’t already widely used for critical welding applications. Traditional welding masks simply filter out light to protect the welder’s eyes. This mask doesn’t have a window in it at all. Instead, the mask includes two cameras on the outside and two LCD screens on the inside. It filters light by processing the video which lends itself to that grab-bag of features we mentioned earlier.

Possibly the best of the system is its ability to selectively filter the brightness of the weld. What this means is that areas outside of the welding arc appear at a normal brightness level, whereas before they would have been greatly dimmed. A demonstration of augmented reality is also shown, where a computer monitors the welding surface, giving the welder a target to follow and measuring the distance between the weld and the filament. The video mentions that an FPGA would be well suited for the image processing, making us think this could be produced at a reasonable cost. After all, they already use X-ray machines for some welds, we’d bet a set of these helmets could be supplied to a crew at a similar cost.

If you’ve ever visited Gettysburg, the turning point of the American Civil War, you’ve probably seen this illuminated topographical map. For years, it was housed in one of the many visitor centers in Gettysburg and demonstrated the progress of the 3-day battle with an amazing 1960s-era visualization using a 30 foot by 30 foot topographical map and many, many light bulbs. Even the coolest museum exhibits are eventually made obsolete, so this masterpiece of battlefield education is now up for sale. The starting price for this auction? Five dollars.

We’re going to be honest. We talked about using Hackaday’s influence (and funding to buy toys such as an AR Drone and the Oculus Rift) to put a project together to save this gigantic map. It’s got everything we love in a large-scale project: giant things weighing several tons, cool representations of data, and vintage electronics. Really, restoring this map is the perfect project for any (very) ambitious hacker. It also helps I live a half hour away from Gettysburg.

There’s a problem, though: the map is literally covered in asbestos. Also, it takes up four shipping containers and weighs 12 and a half tons. Basically, you’re bidding on a GSA auction to be responsible for a hazardous waste disposal project.

Now that our dreams of doing something really cool with five dollars have come crashing down, we’re turning it over to Hackaday readers. If you run an asbestos disposal company and are around South Central PA or Maryland, there may be some people who want to get in touch with you. Drop a note in the comments.

Really, we’d really just like someone to scan this 30-foot square map with a Kinect and a high-resolution camera, and maybe get our hands on a video of the hourly show when this map was still in operation. It should be possible to dig up some topographical data and replicate this map fairly easily… maybe someone should start a Kickstarter to build a smaller, non-asbestos laden copy? 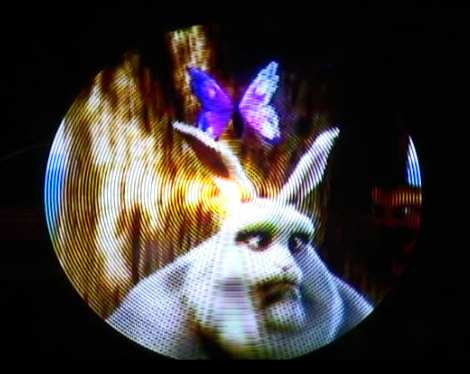 Watching Big Buck Bunny on a spinning POV display is pretty impressive. Sure, the circular display area cuts off some of the picture, but otherwise it looks fantastic. This POV display is based on a Gumstix board. It runs embedded Linux which makes video playback rather easy. But translating each frame to the round display is another story.

The device is the result of a course project at Telecom ParisTech. [Félix], [Sylvain], and [Jérémy] used an FPGA to do the pixel mapping. This uses an encoder wheel (rather than a traditional hall effect sensor) to ascertain the blade’s position. The sensor that monitors the disc sends quadrature encoded pulses which result in 10-bit position data. The FPGA uses that data to calculate where each LED falls in its arc, then looks up the pixel color for that position. It’s not the largest POV display we’ve seen, but it certainly has the very best RGB resolution by far.

END_OF_DOCUMENT_TOKEN_TO_BE_REPLACED Having an open bar usually means hiring at least one bar tender. But this hack does away with those labor costs (and someone to make sure your teenage cousins aren’t drinking) by putting a robot in charge of things. But the fun doesn’t stop there. One of the features of this bartender is that it records a 30 second video every time it dispenses a beverage. We’d image these get a bit funny as the night wears on before taking a dramatic turn into sadness.

The link above shares a ton of details on the device so make sure that you click-through the different pages in the navigation bar. The mechanical page shows off all of the effort that went into designing the machine in Solidworks. The ingredients start on the top layer in inverted bottles. Each feeds to a valve which has its own nozzle. Like a round version of the Inebriator, a glass is placed in a trolley at the bottom that pivots around the center of the machine. Once it gets back to the opening in the acrylic case you can grab your drink, give it a quick stir, and off you go.

Check out the video after the break to get a look at the user interface which includes that recorded video greeting for the happy couple.

END_OF_DOCUMENT_TOKEN_TO_BE_REPLACED